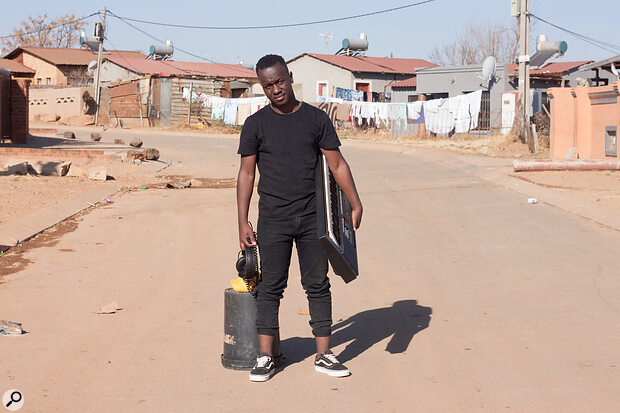 Teno Afrika, aka Lutendo Raduvha, is one of South Africa’s fastest‑rising electronic music stars. Still in higher education yet already making waves across Europe and beyond, it was relatively recently, in 2019, that Raduvha began a love affair with the South African house genre known as amapiano. He has become something of an international ambassador for the style, which fuses deep house and jazz along with preceding South African dance genres, namely the kwaito of ’90s Soweto and the raw, repetitive rhythms of Durban’s gqom (Zulu for ‘drum’).

Amapiano grew out of a subculture of homegrown producers from the townships of Gauteng province, where Raduvha grew up. He spent much of his childhood in Johannesburg and first discovered DJ’ing and production on his father’s computer in 2007. The producer’s deft and minimal explorations of the genre, the name of which translates as ‘the pianos’ in Zulu, eventually led him to release debut album Amapiano Selections in 2020, via Brian Shimkovitz’s Awesome Tapes From Africa label, to a wave of international acclaim. The name Teno Afrika, Raduvha explains, has mystical origins. “It came from a dream!” he laughs. “In 2018, 2019, somewhere there, I was dreaming, I woke up, I was in Africa, and I suddenly started calling myself Teno Afrika.”

In much the same way as the TR‑808 came to characterise hip‑hop, amapiano has developed a remarkable association with the eight‑voice DX10 FM soft synth: a bundled plug‑in in FL Studio that is capable of deep, punchy and plucky log drum sounds. Amapiano music itself has been propagated at a grassroots level by young producers with no easy access to high‑spec studio equipment, crafting tracks in Internet cafes and sharing them on YouTube and Facebook. The follow‑up to Amapiano Selections is Where You Are, which features contributions from several of Raduvha’s contemporaries, including Diego Don, Stylo MusiQ and singers Leyla and KayCee.

I think, my first album. Amapiano Selections. The first album. I can say, that’s the one I can say I’m most proud of. It was great. Like, it’s the project that introduced amapiano to the world. I’m proud of the fact that I produced the whole album while I was in student accommodation, at the Tshwane University of Technology. Most of the tracks I produced in that time, but some other tracks on the album I produced during lockdown, in 2020. Those I produced at home. I was studying for a National Diploma in management services and organisational development. I’m actually still doing my studies! I’m currently doing my first year Bachelor’s in Business Administration. I’m forever studying!

The PC! And then, inside the PC, the music‑producing software! Fruity Loops is the most important thing to me. It’s the most important thing when I’m doing studio work, The first thing I do is open my PC, then open Fruity Loops. The whole of my first record was made using Fruity Loops. I particularly love the log drum, of course. The basis of amapiano. I think Fruity Loops is the only DAW that can create that bass, those drums, that kick. Yes, the basis of amapiano is Fruity Loops. So, that’s why I like it. It has a lot of interesting plug‑ins and packs for production. Without the log drum, there’s no amapiano.

He’s not a musician. I can say, the person who has contributed the most to my musical journey is a friend of mine from university. Right from when I started producing, he was there like supporting me. His name is Pdod. He’s the one! When I first started producing he was there, and he’s been there all the way. Supporting me with everything. How can I put it... he’s been there for everything that I’ve done. When nobody believed in me, he used to believe in me, used to give me that push, saying, “Bro, you can do this.” Even when nobody was listening to my music! When I first started, in 2019, he was the one who was pushing me.

At first, he also wanted to pursue music. We started together. But he couldn’t really do it. He just said, “Bro, this is not for me. I can’t do this. You’re the one who can do this. I’ll just stay with you.” When we started, I remember, it was around April or May, there was a gig at the university. They were looking for DJs for a sort of ‘battle of the DJs’. I didn’t know anything much about DJ’ing and stuff. Like, I only knew how to use the Virtual DJ software! They were using CDJs. I was like, “Man, let’s enter this competition!” So we both entered the competition not knowing how to DJ, not knowing anything about DJ’ing. And guess what? We killed the competition together! And that’s when things started with him there. Then we agreed to just pursue this this music thing, but soon he felt it just wasn’t for him. He gave up along the way, but he has always continued supporting me.

Teno Afrika: I’m so addicted to deep house! It very much influences the type of music I make.

Hmm. I’d say... Vigro Deep’s album, Far Away From Home. I love the vocals. I’m a big fan of English vocals. And I love the drums. It’s very good. By the time I got to making my second album, my style had matured. It was still the same style but... I don’t know, matured! It was definitely better produced than the first album.

I’d like to work with Vigro Deep. Working on drums. He uses the log drum as well. He’d work on the log drum, I’d just work on the percussion! Yeah, arrangements, percussion... I’m a big fan of his drums. Of his bass lines as well. If we could make it work it would be great!

I enjoy vocals. When it comes to the recording of vocals, that’s something I really enjoy. We mostly use Cubase for vocals. Sometimes we use Fruity Loops, but mostly it’s Cubase. Back when I used to produce hip‑pop, you got used to producing vocals using Cubase. Most of the other producers I came into contact with liked using Cubase. So yeah, that’s why that’s why I like to use Cubase.