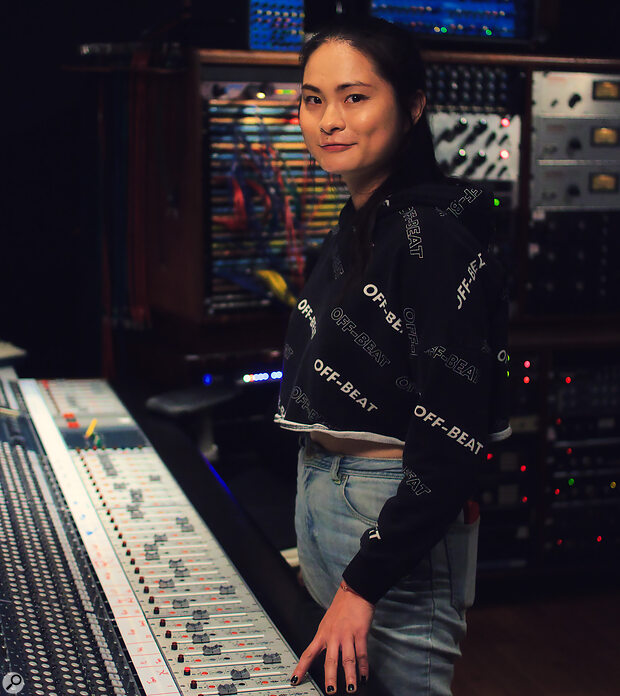 Having cut her teeth as a studio engineer with a litany of global names, classically trained producer Yang Tan is moving into a new phase of her career. “I have had the pleasure of working with a lot of ‘top dawgs’ as an engineer,” she says, “but I don’t yet have the big names behind me as a producer. Having mega artists on my credit list is huge, but I want people to associate my name with a specific sound and style that is unique.”

Yang moved to Los Angeles after studying in Beijing. “I’m Chinese, born and raised. My initial plan was to come here and learn what I needed to learn, because I think that London, New York and Los Angeles are the three cities where you can learn the most in the music industry. There are actually great facilities in Beijing and Shanghai, but I think the whole music production process is not very well developed, so a lot of major artists will still come here to make their records, or to Korea or to New York. I was planning to study and work in the industry and then go back home. But I actually liked it here!”

It was Yang’s work at LA’s Paramount Recording Studios, assisting and engineering sessions and servicing consoles, that opened the door to bigger things. “From there I got a lot of opportunities and started working with a lot of big rap artists,” she says. “An interview with Sound On Sound is on my bucket list!”

Man, that’s a hard one. I can’t stop listening to Doja Cat. It’s mesmerising. I actually started listening to her years ago, before she blew up with ‘Say So’. The new album is really cool: sonically, the concept, everything. The character she pulls out is really cool. Oh, also The Kid LAROI, his latest record. He’s this Australian kid. He’s something special. He brings pop punk and rap into the same space and combines them really well. You hear it once and instantly remember it.

The next one! I always hope my next project is way better than what I’m working on right now. I’m always moving forward, always upgrading. That’s my hope. The next one will be what I’m most proud of, and I’ll keep going.

I always check the acoustic of the room. I go in and clap. And then I listen to records I’m familiar with on their system. That’s the first thing I check. That way I know what I’m working on. Some studios might have the best, most Instagram‑ready look, but if the sound isn’t right you could be working on something very cool, and then go home and listen to it only to hear it doesn’t translate so well. So, the first thing I’ll do is actually go in the room and also get to know their system. If it’s lacking on the low end I’ll be careful on the low end. Or if the monitors are bright I’ll think “OK, their system is bright — I won’t be dampening that too much, otherwise I won’t have enough high end when I come out of the studio.”

I have two. My professor at my university back in Beijing, the Communication University of China. His name was Jie Yang. He showed us the way to finding answers on our own and taught us how to think systematically. He really helped me. Even right now, if I have a technical issue I can’t solve, I’ll consult with him. He always has the right answer. Just from what I learned in his class I was able to design large‑scale broadcasting systems while I was still in my second year of school. That’s when I got an opportunity working with an engineer at a large rock festival in China, called MIDI Festival. They were thinking about how to do the broadcasting and live recording, and I gave them the ideas, designed a system and also got them the sponsorship to get the consoles in. It was two main stages with over 64 signal channels at once, and with a dual backup at the same time. Jie Yang gave me a lot of really good advice, and I had him go over the system to improve it. That gave me the confidence to say “OK, I can do this.”

The other mentor… I want to say: J. Cole. His work ethic. There was this one situation where I was using Logic, still doubting myself in creating music, and he just came in and sat right next to me with his laptop, also producing music but with Ableton. We had a little talk, I told him how I was classically trained so I couldn’t really create anything without sheet music, and he said he just takes 20 minutes, noodling on the piano, trying things. That really sparked me. From then I just kept putting in the work every day, kind of growing out of my limited beliefs of myself. Looking back, I’ve grown so much. I’ve done so many things I would never have imagined I could do.

Yang Tan: Some studios might have the best, most Instagram‑ready look, but if the sound isn’t right you could be working on something very cool, and then go home and listen to it only to hear it doesn’t translate so well.

I think the biggest misconception is that there’s a definite description of the job. A producer can be someone who just brings the vision together — they don’t necessarily need to know how to engineer or compose music — they just have to be the one to bring it all together. They might just have the ears for talent, and the ability to build someone up from there.

I don’t have one. Most of my projects are all over the place in genre and style, so I’ll normally go to the top albums within a genre, or something that’s similar to the song I’m working on, and listen to it for a hot minute before I actually jump into the project.

This question has got me anxious! I’ll say a Neve 1073 preamp. With the Tube‑Tech CL1B compressor. If I could have a 16‑channel SSL 4000 G console that would be great… and maybe a 3600‑Watt generator! I think the 1073 just has that colour, that fatness, especially for vocals. In the modern day that’s mostly what we use it for, vocals. Also for bass it’s amazing. I think the Neve 1073 is a one‑for‑all situation. It’s the best product ever designed.

The [Roland Juno] 60 would be a good one, the original. I think that it’s just been used in like, every record I’ve ever listened to! It’s the most seen and used piece of gear in the studio, but most of them are in poor condition now. Not many people actually own a 60. Sometimes the older gear… I don’t know what it is, it just brings that extra something.

FKA Twigs! I’ve worked with her once, but not on her own music. She produces her own music and also works with other producers. I’d love to see her creative process. I’ve heard she never uses a metronome, they just jam. Each producer just has their own laptop with Ableton set up and they just jam, and don’t even sync to a metronome. When I worked with her she was just invited into the session and we just recorded her vocal. That was it. But she was amazing through the whole thing.

It would definitely be to believe in myself. To start doing what I’m doing right now, which is producing and just making music every day, no matter what project I’m doing, just putting in the time and work. And then planning a step‑by‑step schedule for making that music happen. Keep learning, practice, listening… and repeat day after day. If I started doing that back then I would probably be a very different person right now.