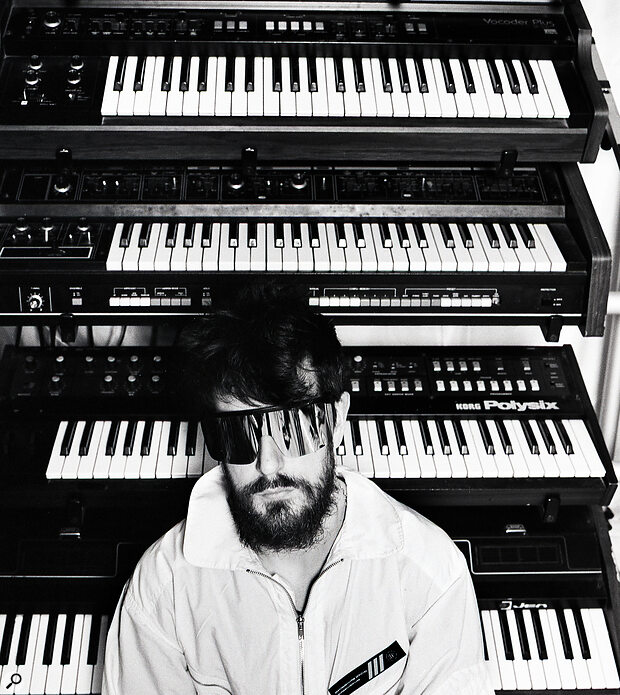 After spending his formative years in the studio of remarkable inter‑disciplinary complex Total Refreshment Centre, Dan Leavers, aka Danalogue, set up his own East London studio, Oscillations. He and drummer Max Hallett, aka Betamax, play explosive jazz‑electronica fusion as the duo Soccer96. With the addition of formidable saxophonist Shabaka Hutchings they become trio The Comet Is Coming, who broke through with Mercury prize‑nominated debut LP Channel The Spirits. The Comet Is Coming are currently at work on their fourth album at Real World Studios. Beyond his own projects, Danalogue’s production CV features Snapped Ankles, Ibibio Sound Machine, Lunch Money Life and Alabaster DePlume.

A producer called Windows 96. I think I got into it because I’ve got a group called Soccer96, so I felt this immediate camaraderie and vindication that there’s someone else called ‘something 96’! It’s an album called Enchanted Instrumentals And Whispers, and at first I thought it was just some really nice‑sounding vapourwave, but I just keep listening to it. I find it deeply relaxing.

It’s probably when we finished Channel The Spirits, the first full‑length Comet Is Coming LP. I think I’m most proud of it because we self‑produced and self‑mixed. Half of it is self‑engineered and the other half was Capitol K. We’d had loads of experiences with Soccer96 where different industry bodies had gotten involved, producers and engineers. We were quite young and lots of people were telling us how we should do things, and we kept being quite respectful and listening to everyone yet never feeling fully satisfied with where we were ending up. So, by the time we made Channel The Spirits, Max and I had already worked out that we liked recording in our own way and having our own methods. Kind of, doing everything ‘wrong’ and breaking a lot of rules.

We had found that we really liked to record before we were ‘ready’, and let the recording process be the compositional process. It’s something very common in bedroom production, but often you don’t get the liberty to do that in a recording studio, because it’s too expensive and your time is limited. You’re told ‘You could do that, but you shouldn’t do it,’ and you go, ‘Well, you do know more than me and you’re older than me, so OK.’ Because we’re kind of polite. When we found the Total Refreshment Centre, we could get a bit rebellious and start plugging things in and turning everything up to 10, just to see what it did! We could use ‘too much’ compression with no one telling us off. Shabaka just delivered such incredible performances on that record, as we all did. A lot of it was done in my bedroom, you know. I was still working jobs, so I was just proud we got it done. Then it got released on the Leaf label and then it got nominated for a Mercury award. It was just like, bloody hell!

The atmosphere. I don’t like professional studios where it’s very clean. What I don’t want to see is a well‑Hoovered or mopped floor. I don’t want, like, good air conditioning. I find that, for me, that’s the death of my creativity, when it feels like you’re in a very serious place. Almost like some kind of office of music. It wants to feel more like a playground — rough around the edges.

It would be Kristian Craig Robinson. Capitol K is his artist name. Head engineer at the Total Refreshment Centre. I basically was the only person around at the Total Refreshment Centre near the beginning who had a fair bit of studio experience, and I was good at coiling leads, so he just shared the studio with me, let me do downtime stuff in there… He listened to my stuff and said ‘That’s really great.’ He was never paternal in that way, but then every now and then he’d be doing something and show me something by accident. Or, he would pretend it was by accident. I could never tell whether or not he was just being a real genius about it! He totally revolutionised my EQ’ing and showed me about compression a bit more, instead of just slamming it all the time! He also got me into the Eventide H3000 and the Lexicon PCM60.

I think the macho world of the music industry leads everyone to think that a producer needs to be the big daddy who’s calling all the shots, sitting at the back on a sofa and basically telling a band what to do. I didn’t like that when I was younger. It made me rebel against it. When I work, I want to leave as much leeway for the band to be the band as possible, you know? A band can make great decisions too, ones I don’t even know about! To be honest, that’s why I’m often down as doing co‑production. I think you can be way more gentle and way more hands‑off. I have to say, I’m a bit of an introvert as well. I might make a strong decision on a group’s track and then be like, ‘D’you like that?’ rather than have the conversation. I feel really safe and creative on my own. If they don’t like it you can just put it back. You have the undo button.

I love the idea of production amplifying what the artist already has to 100 percent, rather than ‘How much of myself can I imprint on this sound, so everyone knows it’s me?’ You should take what they’ve already got, shine it up, set fire to it and get it as resonant and vibrant as it can be. I just want to discover the soul of the music and what it’s trying to say.

Danalogue: I love the idea of production amplifying what the artist already has to 100 percent, rather than ‘How much of myself can I imprint on this sound, so everyone knows it’s me?’

Sometimes I look to Holy Fuck’s first album for how badass the drums are. Just to remind myself of how sick drums can sound. Especially live drums. Sometimes if I’m worried about what I’m doing with sub — which is normally the most confusing thing for most people mixing — I put on Samiyam or Ras G, because they just use sub really amazingly. Kind of rebelliously and quite extensively. Once I’ve heard a heavy beat with ladles of sub, I get reassured about what I’m doing. And maybe encouraged to do more! I do sometimes check systems and headphones with ‘Parisian Goldfish’, the Flying Lotus track. It’s just so rich and full across the frequency spectrum.

The thing I use the most is probably my Eventide H3000. I just don’t know if I could do without it. It can do loads of subtle stuff and loads of radical stuff. It’s got thousands of presets — I’m not that into presets in plug‑ins, but the presets on the H3000… What I like to do is have a sound coming through it and then just spin the wheel as hard as I can, so it goes brrrrrrr! It’s like playing roulette. It’s a good chaos effect. Sometimes you need to have three or four spins because you’re just like, ‘OK. That is unusable.’

I’ve had the Roland SH‑09 since I was 17, and now I’ve got four. It’s really good that I have spares. We played Shepherds Bush Empire at the end of the last Comet [Is Coming] tour and it just broke halfway through the set. Luckily the tour manager just leapt on and swapped it around, like an F1 car getting its wheels changed. I rinse the filter pretty hard, I’m always going ‘woow, wooww’ and really slamming it hard, and it just started choking and cutting in and out. It was so intense. I remember just thinking, ‘I wonder if we can build the SH‑09 again, but with everything inside somehow made in a safer way, or something?’

I went to Roland and talked to them about it, but they only really want to build new stuff that can kind of do anything. I’m like ‘What does that button do?’ and they just say ‘That button can do anything!’ and I’m thinking, ‘I don’t want something that can do anything.’

The repair man I take them to, he’s amazing. He’s half my biggest fan because I bring him so much work, but he’s also always telling me, ‘I’ve just spent two weeks fixing that! I’ve been watching your videos where you do this thing where you sweep up and down the keyboard, and you can’t do that any more!’ It’s a bit like Q telling off James Bond. And I’m just like ‘Yeah, yeah, sure…’

As an artist, I’d like to collaborate with Flying Lotus because I think he’s just the craziest producer ever. Although I’d be super intimidated. But as a producer, to help produce one of my bands, I’d say Rick Rubin. Just because he’s Rick Rubin. There’s nothing else you have to say. He’s a vibe‑tickler.

Then he just shut the door.