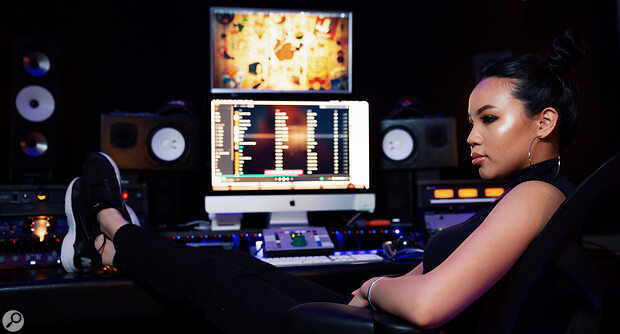 Macau‑born Jessica Wong began her production career at Boston’s prestigious Berklee School Of Music before relocating to Atlanta, Georgia, where she remains today. “Every Spring break, Summer, Winter break, I would come here and visit,” she says, “and just work — doing internships, working.” It was this drive that led her to work alongside the likes of Drumma Boy and acclaimed mixing engineer Leslie Brathwaite, developing her practice in top‑level environments while still studying. After working up an impressive CV as an engineering and mix assistant, Wong, in her own words, “just started doing my own recording sessions”. Nowadays she can often be found working in the Madison Records studio in nearby Chamblee, Georgia. “I’m really the only Asian female engineer that I know in Atlanta,” she says. “Or outside Atlanta, even! Often times clients will come in the room and just be amazed: like, ‘Wow! I’ve never worked with a female engineer before!’ I do believe that I’m good at what I do. I’m able to leave a good impression. It’s a good thing. You know, I’m from a different culture, so I bring a new dynamic, a new perspective to things, and I think it’s refreshing to people.”

EDM! It’s crazy, because I’ve never really been an ‘EDM listener’. But recently, I went to my first EDM festival and it just completely changed my mind. I found my new favourite artist, his name is ZHU. His music is just so different. It just completely changed my mind on how I view EDM in general. His music is EDM, of course. But it’s also combined with like jazz, with hip‑hop and R&B... All the stuff that I love. And he’s also Asian, so I can really, like, feel it.

I’d actually say it’s the song I recorded for a fragrance campaign with Ralph Lauren. I mean, all the music stuff, all of that is great. But to be able to collaborate with such a worldwide brand, and just have something that I’ve worked on be seen everywhere... At the time, I was working with a songwriter and artist named Prince Charlez. I was his engineer. He has written for a lot of big artists, like Beyoncé, Cardi B, Rihanna, Mariah Carey... I’d been working with him for a while and he got connected to do this campaign; to sing and write a song for Ralph Lauren. That’s how it came about. And I’ve seen it on TV, I’ve seen it in airports — people will be at the airport and see the commercial, and they’ll send videos of it to me! So, just to be able to have my work displayed, everywhere in the world, it makes me very proud.

Jessica Wong: You just cannot go into Pro Tools without a compressor.

The gear and the plug‑ins list. When I go into the room, I check out the kind of mic pre they have, the compressor. It’s just so important! I really love the Crane Song Flamingo preamp, although the one that I use most often in our studios is the Neve 1073, of course. You just cannot go into Pro Tools without a compressor. Once you have those, that’s, like, the majority of capturing a good vocal.

I’m really simple with my plug‑ins: usually I’ll do the FabFilter Pro‑DS, an AR‑1 compressor. I’ll go with the SSL channel plug‑in — the one from Waves — and I’ll also go with, like, a [Waves] CLA for vocals, just a little bit of compression. I also like to have the [Oeksound] Soothe 2 plug in when it comes to mixing down and stuff. Yeah. And then [Waves] H‑Delay, sometimes [Soundtoys] EchoBoy... it really depends, but I’m pretty simple when it comes to plug‑ins!

I have a lot of people who have helped me out throughout my career, but there are two really important ones. One is Jeremy Brown, the other one is Preston Reid, also known as Prizzie. Those are the two people that I first worked with, when I came to Atlanta. With Jeremy, I was his recording assistant while I was in Berklee. I learned a lot of technical stuff, which was good. I really learned how to be a good engineer while I was working with Jeremy. I learned how to be efficient, how to be fast at recording and how to cater to different clients, different personalities. Also, studio etiquette. Working with people. That’s something that I never really learned when I was in school. I really learned that when I got here.

With Preston, I was his mix assistant when I moved here. I’ve gotten a lot of great mixing tips from him, but also outside of that, he’s always been a mentor and has given me advice on things, like my career. And just life! These are people that I can always rely on, that I can just fall back on if I need any advice or just need somebody to talk to.

Well, in general, currently I’d say it would be FKJ’s latest album, Vincent. That one, sonically and musically, is just phenomenal. But, really, if I’m working on something that’s a specific genre, I’ll find a song that sonically is the closest to the song I’m working on and reference that.

I think it’s being able to read the kind of situation you’re in, and the people that you’re working with. To be able to figure that out quickly, early on in the session. Some artists, especially when it comes to vocalists and when it comes to people who are more experienced, really just want you to capture a good recording. And they will do all the rest of the work. Sometimes they don’t want you to give them advice, or say too much. So you have to be able to figure that out and just work accordingly.

Other times, people are still trying to figure out the sound. They might not tell you, “OK, I need your help,” but you have to figure that out and help produce them vocally, to guide them through. If you don’t do that, then it’s cool — they’re not gonna say anything, but they’re not going to come back to you because it’s like, “OK, I didn’t get what I need. I can get the same thing with another engineer.” Also, I think, when people come to you for engineering, most of the time they are looking for a hit record. So you have to figure out ways to bring the record to that point, whether it be rearranging the beat, creating little breakdowns and stuff, different vocal effects... Just doing everything you can to bring the record to life.

Well, obviously any Beyoncé session! Just because, you know, it’s Beyoncé. But I would say Aaliyah. I’m a big fan. It could be anything she’s done, but I particularly love her last album, the self‑titled album. That’s probably my favourite of hers. I think it’s a very personal album to her. A lot of the songs are just about her, just her as an artist. It’s just very genuine. She’s always been amazing. I’ve always kind of looked up to her.

FKJ. As well as being an amazing producer, he’s just one of my favourite artists. I’ve listened to him for a long time. He produces all of his own music. I’ve been playing piano since I was, like, four. So I’m a very musical person as well. I think, naturally, I lean towards music that is more musical, because nowadays a lot of the songs I hear on the radio, a lot of songs at the top of the charts are very similar to one another. But the music of somebody like FKJ is just a breath of fresh air to me. He plays nearly every instrument!

Recently I actually went on a songwriting, production and engineering camp for three days. The whole experience was just amazing. There were so many creatives there. Amazing producers, amazing songwriters, engineers. Everybody was really serious about what they do, everybody was so talented. Just being in the room with creatives like that, just creating with them, I think that aspect of it is my favourite thing.

I was really young 10 years ago! I would say, just keep pushing forward. I didn’t expect to become an engineer. I was still in high school. I was just, like, playing the piano! And I wasn’t sure where I was gonna go with that. Before going to Berklee, I didn’t have an engineering or production background, unlike a lot of other people there. Macau is a relatively small city, even though it’s known as the ‘Asian Vegas’. There aren’t many studios there, and not a lot of people who are in production or engineering. So I wasn’t very exposed to it. I wish I had figured out that I wanted to do engineering and production earlier on, so that I would at least have had the fundamental knowledge of it before going to college. When I went, I really had to start from the ground up. I was totally, completely new to it. So it took me a while to become skilled at it. So I would say, just keep pushing. And believe in myself. Be open to all the different possibilities that there are in music.