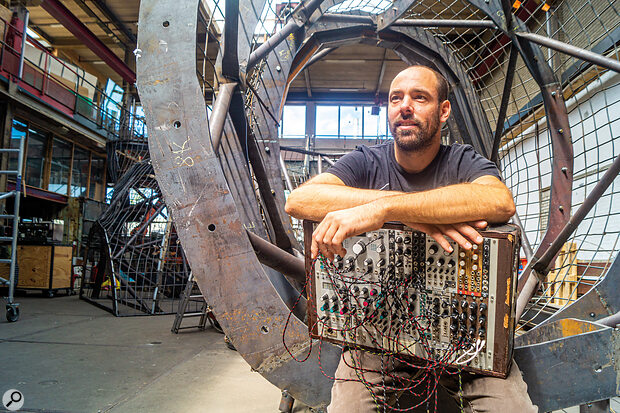 Based in The Hague, Netherlands, Jan Willem Hagenbeek is best known in the modular world as Ginkosynthese, a fascinating one‑man developer working in the world of DIY kits. His latest modules include the TEPHRA and MAGMA diode compressors, two exciting packages of studio‑grade processing power for your Eurorack system.

My first encounter with electronic sounds was in my early age. My grandparents had an old transistor organ; I loved to open it up and look inside, at all the colourful wires neatly bundled together. I started working with modular in 2004 after my first live gig. I needed to make my setup a bit more transportable! There was always that passion there, for creating sound and exploring circuit bending.

Later I started to collect vintage analogue synths, and got my first PAiA modular stuff. I then started to put circuit‑bent toys behind Eurorack‑sized panels and added trigger inputs with transistors. I built a tap‑tempo LFO around the Electric Druid chip, which became my first module — I built that for other people, too. It basically got a bit out of hand, and I am now a full‑time modular synth designer.

It depends on what I want to do. I have a big Doepfer‑only system which I love to play with in my studio. Doepfer modules are very pure; every module has just one task and a Doepfer‑only system invites you to experiment with synthesis. I can lose hours making experimental sounds. But my real passion with music is performing live. When I perform live I do a lot of patching on the fly, and for that I need a quicker workflow than I can have on the Doepfer system. I love the Qu‑Bit Rhythm, the Making Sound Machines Stolperbeats, the Erica Synths Pico Drums and the Patching Panda Hatz for creating my drums. For synth voices I use several Mutable Instruments modules, as they can be easily set up as complete synth voices.

On Ginkosynthese and DIY kits

Ten years ago I thought I’d sell a few tap‑tempo LFOs to cover the costs of making modules for my own setup. Those ‘few’ became ‘a lot’, much faster than I expected, and I started to earn enough money to pay my rent and build up my ideal live setup. I was a schooled architect at that time, and next to making modules as a hobby I was designing houses. I realised I liked making modules more than being an architect. So I quit being an architect and focused on designing modules. I liked the concept of the DIY community so mainly kept selling DIY kits. For me, a modular synth is an instrument that has to be built up by yourself to cater for your own needs, and what better than to build the modules yourself as well!

On performing with modular live

I always keep it very straightforward. I am not performing live to create the most wicked and complex patches, I perform to have fun and create an atmosphere. For me it is like talking to the audience through the instrument. Sometimes I feel the need to create noise, sometimes I feel I want to make beats and sometimes I feel the mood for playing some ambient. I never prepare my live gigs. I keep the patching simple but I focus a lot on playing music, which means that, for me, I play with the tension between layers of sound rather than focusing on the synthesis itself.

One ingredient I always have in my live sets is the [Ginkosynthese] Sampleslicer module, which can be played as an instrument on its own. I feed it sounds from a Korg Kaossilator and then play with the knobs on the Sampleslicer, forcing any random sound to fit into a beat as it slices on the incoming clock.

When I started Ginkosynthese, I was the first person in the Netherlands to sell Eurorack modules as a company. All over the world companies were popping up at that time, but we were still just a handful of full‑time manufacturers. We met with each other often and helped each other out with parts and troubleshooting. We travelled the world, basically just to hang out and drink beers! In Europe the most active manufacturers at those hangout meetings were Befaco, Bastl and Erica Synths. We all became friends and we met countless times. It goes much further than just those few moments at events like Superbooth. I also organised modular events in my own workspace so that makers could get together. I sometimes feel we lost this close community a bit when the Eurorack market exploded. But the community is still strong. It helps me to continue doing what I am doing.