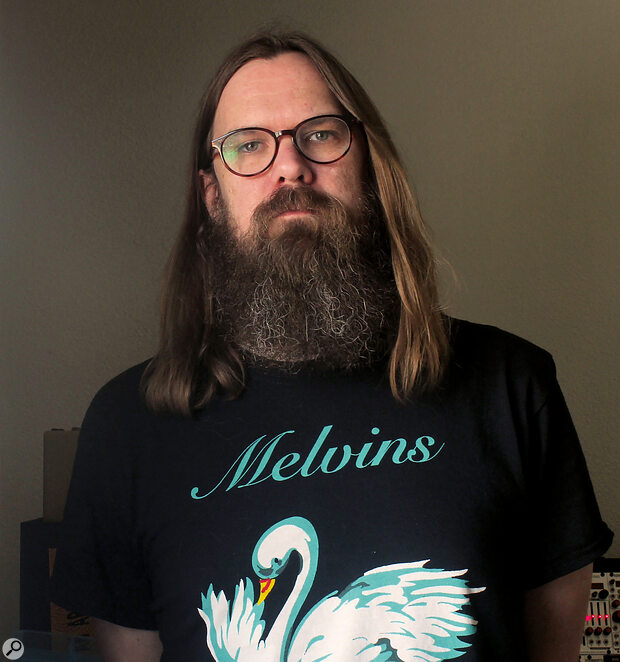 American synthesist Josh Mason’s latest release, Utility Music, is a rather stunning demonstration of the Doepfer A‑100 system. The fruit of a year‑long project beginning on January 1st and ending on December 31st 2019, Mason assembled a fresh patch from scratch every week: Mondays to Fridays were allocated to construction, Saturdays were set aside for ‘freezing’ the patch and exploring performances with it, and Sundays were allocated to recording and deconstruction. It’s a beautifully patient and meditative exploration of modular synthesis, not least due to its inclusion of a gorgeous 72‑page book with point‑to‑point patch notes and insights into Mason’s process.

“I had no idea what I was actually going to end up with after 52 weeks,” explains Mason, “so the fact that it yielded something listenable, or at the very least presentable, was a triumph in and of itself, as far as I was concerned!” You can find out more about Mason and Utility Music at joshmason.info.

On His Entry Into Modular

Like quite a few people, I imagine, I came in the back door about nine years ago from a guitar‑pedal/tabletop‑device paradigm! It turned out that control voltage was a solution to a problem I didn’t realise I had until I found that only having two hands and two feet was too limiting while trying to play and process acoustic sources in real time. Plus, there was the added benefit of being away from a computer screen. I was asked a very important question when starting out, “Do you want to process sound, or generate it?”, and I spent most of my early foray into the format processing sound, since that’s what I knew and it felt lateral enough that I wouldn’t drown at the outset.

Josh Mason: "I was starting to feel as though all modular synthesis was good for was a DSP chain strung together and looped for as long as an Instagram story would allow!"

It started out as a ‘what if?’ back‑and‑forth with a friend while on tour, and quickly became a very deep exploration that was designed to be both expressive and expository. I was starting to feel as though all modular synthesis was good for was a DSP chain strung together and looped for as long as an Instagram story would allow! It got me wondering how many people, myself included, were actually interested in knowing what is happening under the hood of their gear. I couldn’t think of a better way to explore that than by going back to where the format started and limiting myself to purely Doepfer designs, which seemed to me like a radical pivot in 2019. I wanted to prove — mainly to myself — that there is still a lot of mileage left in older hardware design that doesn’t do all the work for you.

One voice that I am especially fond of, while not exactly its strong suit, is the Harvestman Kermit MkII. There is something really special about its instability — the same could be said about all the MkI Harvestman designs, really — as well as the fact that, unlike a lot of more modern wavetable designs, you can’t get at or change the order of the waves on board. You get what you get, and it’s an interesting restraint to work with and around. In the analogue realm, I really enjoy the sound of switched‑capacitor filter designs such as the Mk1 [Industrial Music Electronics] Bionic Lester and the WMD Synchrodyne. Most I think would prefer to dial out the clock bleed on those types of filters, but I say grip it and rip it. I will also wear a sign and ring a bell all day for Let’s Splosh from Nonlinear Circuits. Andrew Fitch is doing some of the wildest stuff in the chaotic modulation realm.

On The Culture Of Modular

More now than ever, with so much information out there that’s accessible to all, the line between hobbyist and professional is blurring; the result of which is innovation that oftentimes feels community‑driven. So, in addition to those camps, it also creates room for the educators, the social media personalities, designers, engineers, and everything in between. There really is a lane for everyone. It’s just a matter of learning how to merge and finding the right gear — both literally and metaphorically.