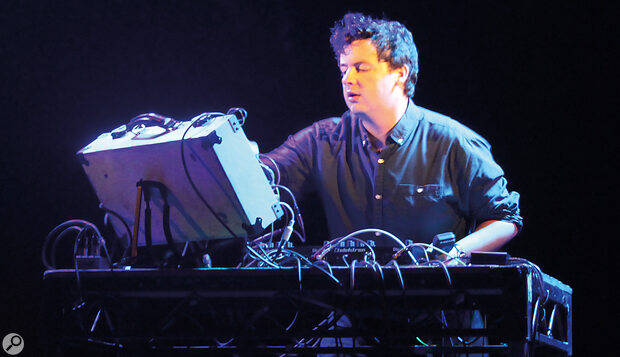 The founder of Bristol‑based developer Future Sound Systems, Finlay Shakespeare is a certified maverick creative. The most recent module brought forth by Future Sound Systems is the FIL4 Timbral Sculptor, a wild beast of a module combining multimode filtering, wavefolding and distortion, which you can expect to see reviewed in these pages soon. Future Sound Systems has collaborated with some icons in the world of electronic music, from Throbbing Gristle’s Chris Carter on the Gristleizer series to Mute Records’ modular‑loving founder Daniel Miller on two modules, Makrow and Stumm. The company also recently lent their expertise to new company PWM, designing the analogue architecture of their debut semi‑modular synth, the Malevolent.

I got into modular synthesis after deciding to try building my own equipment. During my teenage years, the Internet was beginning to get to a point where people could easily share designs and ideas, so it started to become relatively easy to find circuits to build, and the necessary electronic know‑how to vaguely understand how these circuits operate. After a small foray into the 5U format, I got into Eurorack just around the time that brands such as Make Noise, The Harvestman and Intelljel began to form. This was really at the beginning of Eurorack’s domination of the modern world of modular synthesis.

The two modules that really drew me towards the Eurorack format were Livewire’s Audio Frequency Generator and The Harvestman’s Tyme Sefari. I still use these frequently after purchasing them over a decade ago. I found the prospect of both unusual oscillators and voltage‑controlled delay, looping and recording intriguing, and I still often think of those two modules — even when designing my own equipment. More recently, I built a Westlicht PER|FORMER and Intellijel Rainmaker; two very different modules but incredibly deep in what they do. Structuring songs on the PER|FORMER and designing delay lines on the Rainmaker is a bit of a dream come true.

Finlay Shakespeare: "It’s been incredible to see how modular synthesis has become such a commonly seen thing now. When I started experimenting with electronics in my parents’ garage, I never expected it to evolve into a day job."

On working with artists to develop modules

I find that designing modules with artists is a really interesting experience. It gives a glimpse into their artistic practice, perhaps on a more technical level, with the aim to solve a problem they’ve run into in their modular system. It’s extremely gratifying to know that we’re giving something back to those artists, many of whom have been heroes of mine for a long time. One of the most exciting results is seeing how customers then use those designs in ways that we wouldn’t have ever expected. This reflects how any modular system, whether that be a synthesizer or an entire studio setup, can present a multitude of creative possibilities.

The Future Sound Systems Gristleizer series was born out of a temporary gap in the market. There had been commercially available Gristleizers produced before ours, but somehow the stock flow had seized up and there was still a demand. I had been working with Paul Smith — Chris and Cosey’s ex‑manager — for a good while then, and I raised the idea of doing a FSS Gristleizer with him. Paul passed the idea on to Chris. Chris was on board once we started talking, and he also introduced me to Roy Gwinn, who had designed the original circuit which Chris had extracted from [the July 1975 issue of] Practical Electronics magazine. After a couple of years of hardware revisions, we released the modules to a pretty huge fanfare. It was quite unexpected! FSS owes a lot to Chris and Roy. We wouldn’t have the following we have now without the Gristleizer modules — and their patience!

It’s been incredible to see how modular synthesis has become such a commonly seen thing now. When I started experimenting with electronics in my parents’ garage, I never expected it to evolve into a day job. I simply hope that with its dramatic rise, the community feel of the ‘early days’ can be somehow retained. Nevertheless, it’s great to see that artists have a way of constructing their own electronic musical instrument so easily nowadays. Perhaps we’ve reached peak synthesis? Only time will tell.