“Pehaps we’ve reached peak synthesis?” remarked Future Sound Systems’ Finlay Shakespeare in our January 2022 issue's Modular Q&A. No doubt this was meant with at least a little tongue in cheek, but it’s true to say the furrows of analogue synthesis sometimes feel so deeply ploughed that it’s hard to know where things can go next. 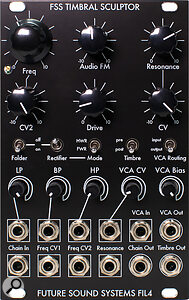 This is especially true when it comes to modules dealing with raw functions like filtering and tone shaping — modules such as Future Sound Systems’ new FIL4 Timbral Sculptor. For these the heritage is extensive, the competition is stiff and the bar is high. I hope Finlay won’t mind me sharing the wording of his initial message to me, but I couldn’t put it better myself: “New filter. Goes from super clean to bat shit with the flick of a switch or two.” How could I resist?

Comprised of an 18dB/octave three‑pole multi‑mode filter, a VCA, two different West Coast‑style wavefolders and a rectifier, at its mildest end the FIL4 very much does what it says on the tin: it sculpts timbre. At its most extreme end it creates new timbres entirely, mangling, morphing, ripping and pitch‑shifting sounds into sonic creatures unknown. A collision of subtractive East Coast synthesis and additive West Coast synthesis, the FIL4 essentially shaves off harmonic content from an input signal while also adding harmonic content, twisting, augmenting and occasionally replacing the content of its input signal in quite remarkable ways. A switchable Lockhart wavefolder placed in the filter’s resonance path results in some intense non‑linear filter feedback behaviour, tonally adjustable with broad strokes via a rectifier switch with options for half‑wave (cutting negative voltages) and full‑wave (inverting negative voltages) rectification.

With the Folder and Rectifier switches set to ‘off’ and with a fairly low drive level, we’re left with a lovely sounding, characterful multi‑mode filter with low‑pass, band‑pass and high‑pass options. This character is due in part to its slightly emphasised resonance at higher cutoff frequencies; inspired, says FSS, by the bright and angular filters found in instruments like the Roland TB‑303.

Alongside its filter frequency and resonance controls, the FIL4’s panel presents a Drive knob and also a bipolar Audio FM control for self‑modulating that frequency — a nod, as I understand it, to some of the early Korg filters that would often do this by default when driven. Two CV inputs allow for voltage control over the frequency, with CV input 1 offering volt‑per‑octave tracking. Five switches beneath these knobs toggle the folder and rectifier on and off, select between half‑wave and full‑wave rectification and switch the respective positions of the Timbre and VCA circuits in the signal chain. In this respect — as well as in a few others — the FIL4 carries some characteristics forward from the FIL3 Spectral Devastator, which also offers signal‑flow options for its snarling, sparring high‑pass and low‑pass filters.

No wavefolding is to be found on the FIL3, though. The FIL4’s use of both its Lockhart and deadband wavefolders, combined with the Audio FM’s well‑placed ‘implied’ distortion, is where it really takes off, stacking and grinding these three elements against one another in all manner of ways to occasionally achieve a distortion so vulgar that it feels like such things shouldn’t be allowed to cohabit in one module. Gorgeous. The Timbre circuit’s deadband wavefolder constitutes the FIL4’s West Coast, so to speak, in that it’s very much a circuit derived from the Buchla school of synthesis, generating more and more harmonics as the circuit is driven. The Timbre circuit can either be set to Pre so that it receives its signal from the Drive circuit (pre‑filter), or it can be set to Post, to receive its signal from the filter output. It also has its own dedicated output, sans filtering, which is handy.

CV inputs are available for all the filter and VCA features you’d expect. The FIL4 also presents options for where in the signal chain your audio goes in and comes out. At Input, the VCA controls the amount of drive going into either the Timbre or Filter section (depending on where you decide to place the Timbre circuit). At Output, the VCA becomes a more conventional, holistic volume control at the end of the FIL4’s signal path. This isn’t essential, of course. If desired you can simply go in at Chain In and out at Chain Out and assign the FIL4’s VCA to a different task entirely.

These signal path options and their position switches occasionally feel confusing, but with the help of a block diagram included on the FIL4’s manual, as well as some trial and error, it becomes clear that part of the beauty of this module is that it can be as simple or as complex as you want it to be. This is some very clever circuit design indeed, with a huge range of potential applications. Such a generous amount of signal‑path adjustability means it’s up to you whether the FIL4 becomes a dynamic, adaptable module that changes its configuration with every patch, or a reliable system mainstay, set to a preferred signal‑flow configuration and dialled into almost everything you do. I can easily envisage both.

At times, I should say, the wildness of the FIL4 can feel a little ‘off‑or‑on’, with sculpting turning into taming at the flick of a switch — literally. Although, if we’re honest, that is also the thrill of it. Switching the Lockhart wavefolder into the signal flow made for instant grins. Its chains of attenuation to gain back to attenuation and then gain again mean that a substantial noise floor does come through from time to time when no input is present, though I suppose that’s the trade‑off for an analogue design capable of the FIL4’s level of sonic menace.

Some modules simply add weight to a system. They augment the character of your patches with a prevailing influence that works across multiple sounds and voltage routes. In my experience, it’s these types of utility‑plus‑creativity modules that make the most difference between an interesting‑sounding patch and an excellent‑sounding patch. And they are difficult to do well. The FIL4 is one such module. In many ways, it represents something of what modular is all about, not only in its incredible flexibility but also in the way it’s positioned at the very intersection of clinical adjustment and wild unpredictability. One may argue we’ve reached ‘peak synthesis’, but the FIL4 serves as a reminder that — even with the rawest analogue designs — there’s always another peak to explore.