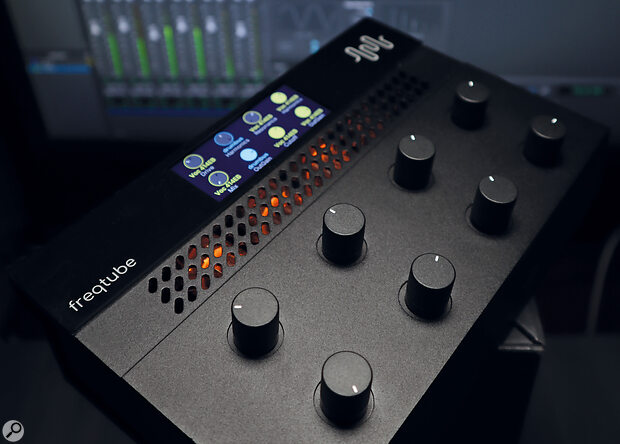 Ten years ago, it seemed only a matter of time before ‘the box’ swallowed everything. Computers were becoming ever more powerful and plug‑ins ever closer to the hardware they emulated. Even diehards like Michael Brauer and Andrew Scheps eventually gave up the fight and turned to mixing in software. If it didn’t sound identical, it sounded good enough, and the advantages of portability and perfect recall were becoming too tempting to overlook.

As it turned out, though, there’s since been a resurgence of all things analogue. This has been a big deal in electronic music production, where DAWless is now a word. It’s been a bit more low‑key in the mixing world, but there are quite a few people out there exploring innovative ways to integrated analogue circuitry into a computer‑based setup without losing recallability. Notable examples so far include McDSP’s neat Analog Processing Box, Elektron’s Analog Heat, analogue processors with plug‑in‑based digital control from the likes of Wes Audio, and the fiendishly clever Access Analog remote processing system.

The latest attempt to place analogue tools in the hands of digital mix engineers comes from Freqport, a new company that is part Australian, part Danish. Of the systems described above, the Freqtube FT‑1 somewhat resembles the McDSP APB, in that it is an all‑in‑one ‘black box’ processor which handles A‑D and D‑A conversion internally. However, what it does to the audio once in the analogue domain is quite different!

The FT‑1 is a modestly sized desktop device with a robust black metal shell. It is powered by an external DC power supply, and connects to a host Mac or PC using a single Type‑C USB cable. There’s no analogue or digital audio I/O at all. If you want to pipe audio through the FT‑1, you must do so using the dedicated Freqtube plug‑in. At the time of writing, VST and Audio Units versions had been available for a while, and the AAX plug‑in was in beta. The list of officially supported DAWs is not exhaustive at present, but I did my VST/AU testing in Studio One v6, which is not on the list, and encountered no serious issues.

What the FT‑1 lacks in socketry, it makes up for in hands‑on control, and the lower half of its top panel is given over to two rows of four rotary knobs. The top half houses a colour screen that is used to convey information about what the encoders are doing. In the middle is a slotted ventilation grille revealing the secret processing weapons within: pairs of E83CC (a modern ECC83/12AX7 variant) and ECC81/12AT7 valves emit a moody orange glow. Unsurprisingly, these are not operated at their rated 330V plate voltage, but neither are they being run in ‘starved plate’ mode; Freqport told me that after a lot of experiment, they’d settled on 65V as a good compromise. 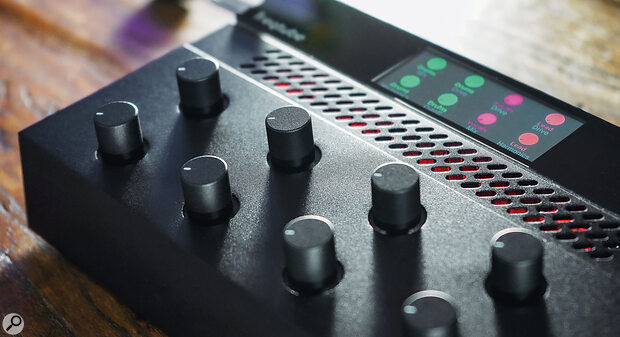 The FT‑1 is a compact unit designed for the desktop, though a rackmounting kit is available.

The plug‑in installation is accompanied by another program called Freqport Hub, which runs in the background whenever a Freqtube plug‑in is loaded. This has a small user interface that can be inspected to confirm everything’s working correctly, and also set the buffer size. Three options are available — 128, 256 or 512 samples — plus a ‘Lower Latency’ tick box. The FT‑1 always operates at the same sample rate as the host DAW.

The FT‑1 provides four channels of plug‑in processing, one for each valve, and it’s possible to use both E83CC or both ECC81 channels in linked mode for stereo operation. Apart from the valve type, the signal path is the same for each channel, and can be overlaid on the plug‑in user interface by clicking the helpful eye icon. First of all, the input encounters a split point, where a dry signal is tapped. This is routed through an optional single‑band filter and a polarity control, before a wet/dry Mix control recombines it with the other half of the split, just prior to the internal A‑D conversion.

The wet half of the signal passes through an identical single‑band filter, and then encounters a Drive control. An additional +18dB boost button effectively gives this two ranges, acting not unlike the Punish button in Soundtoys’ Decapitator. Suitably boosted or attenuated, the signal then hits the valve, with the saturation behaviour determined by a Harmonics control, before a joyful reunion with the dry signal. Last of all, a level slider allows you to compensate for the gain changes introduced by all this processing, which can of course be fairly extreme. 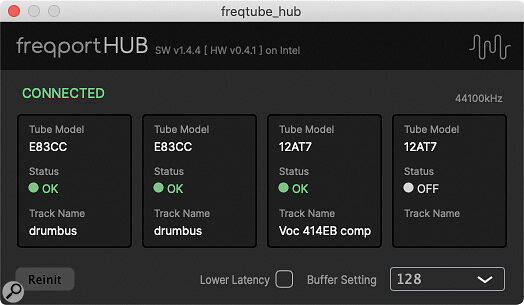 The Freqport Hub runs in the background whenever a Freqport plug‑in is active.