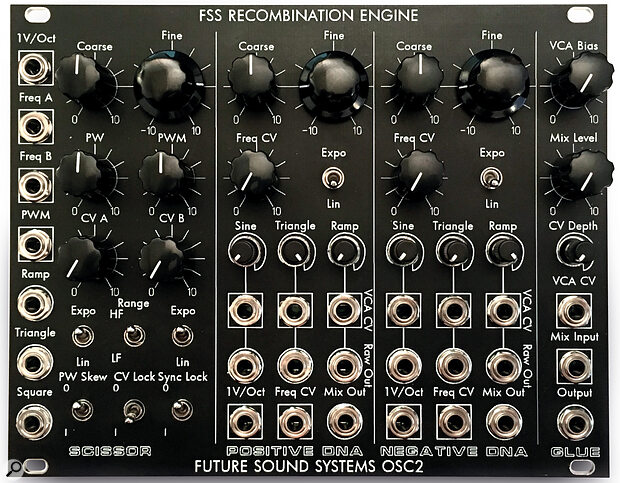 The modular community prides itself on pioneering and experimental synthesis. More than any other corner of the audio industry, modular manufacturers have the low overheads and eager, try‑anything‑once, customers to road test new techniques. The FSS Recombination Engine feels like one of those moments.

At its core, the Recombination Engine is a triple analogue VCO module. Certainly nothing new about that. How it combines the three, however, is quite unique. Like a skilled Japanese chef, audio waveforms are sliced up at audio rates and recombined to make tasty waveform sushi.

FSS have developed a new language for this sonic Sashimi. The Scissor oscillator does the slicing of the Positive and Negative DNA oscillators. These are mixed together and become the top and bottom half of a new combined waveform which appears at the Glue section, a mixer and VCA combined. All three oscillators are reissue Curtis CEM 3340 VCO chips, as used in legends such as the SH‑101 and Prophet 5.

So far, everything I’ve described could be achieved using two standard oscillators and an audio‑rate switcher module, but the Recombination Engine offers a couple of unique tools to push the waveform blending into new territories. PW Skew locks the pulse‑width phases of the Scissor oscillator to the frequencies of the two DNA oscillators. So on the longer phase of the pulse‑width cycle, the corresponding DNA oscillator will be pitched down, stretching the waveform. The other DNA oscillator will be pitched up accordingly, squishing its waveform. This can result in some very pleasing formant‑like timbres from the Glue section.

Sync Lock is another unique feature which would be difficult to reproduce without multiple other modules. Essentially it resets the phase of the DNA oscillators to sync with the Scissor oscillator. The positive DNA is reset on the positive half of the Scissor waveform and the Negative DNA is reset on the negative half, keeping everything cleverly and proportionally in sync.

The palette of sounds that emanate from the OSC2 is quite breathtaking.

The palette of sounds that emanate from the OSC2 is quite breathtaking. The combination of possibilities including FM, AM and sync, across three different oscillators all being recombinated into a new waveform can result in timbres as complex as any I’ve ever heard, some of which sound like synthesis types that the OSC2 isn’t even capable of. It does take time and experimentation to get there, and as always, the best results come when external modulators get involved, but it’s always satisfying. Let’s not forget that, thanks to lots of individual outputs and separate 1V/oct inputs for each of the three oscillators, the OSC2 can be used as a regular triple oscillator module, and it sounds excellent doing so. In summary, the OSC2 exhibits sonic traits from FM, phasing, sync, comb filtering, flanging, AM, bit‑crushing, formant filtering and, of course, classic analogue — sometimes all at once. And it does most of this through fairly simple, albeit clever, waveform manipulation.

Using the Recombination Engine feels a little bit like being a mad scientist, even by modular synthesis standards — a lab coat and pocket protector might make suitable attire for patching sessions. So far, I’ve resisted the urge to buy an oscilloscope module for my Eurorack setup, but the OSC2 makes a good case for owning one, not just for the pretty waveforms, but to truly understand all the complex interactions that the module is capable of. I think the OSC2 will probably appeal to the more technically minded modular owner. It is a very clever module with a wide sonic palette and will keep your brain flexing whilst you work its myriad possibilities.