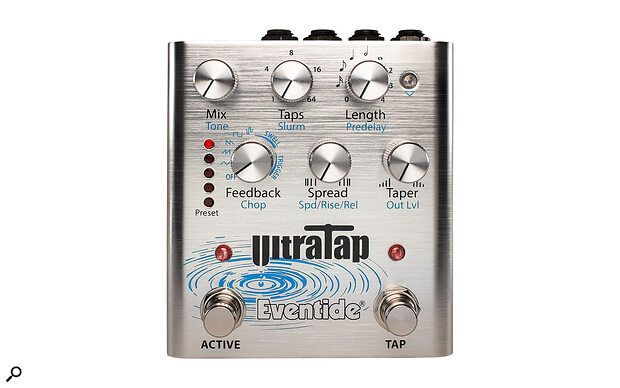 I first tried UltraTap running on Eventide’s H9 processor, though its origin can be traced back as far as 1981 to Eventide’s SP2016’s Digiplex and MultiTap algorithms. Later, it became available as a DAW plug‑in, and now it has made the transition to Eventide’s new compact pedal format — thankfully, without seeming to lose any functionality.

Up to four seconds of delay are available in Time mode and up to nine seconds in Tempo mode, but this is no straightforward echo unit. UltraTap is a multi‑tap delay that’s enhanced by Eventide’s typically creative functions. These let you smear the delays, add reverb‑like volume swells and so on. You can also use an external pedal in place of the horizontal ribbon at the bottom of the equivalent plug‑in window, to morph smoothly between two sets of control settings. As with previous pedals in this range, there are six knobs and a button to select secondary functions, so you can get to everything right from a front panel that’s not over‑cluttered.

Power comes from an included 9V PSU and audio connections are via a TRS input jack that’s switchable for mono or stereo sources (use a standard guitar cable for mono use) and separate stereo out jacks (it can still be used in mono if you prefer). There’s switching for guitar or line‑level operation too, so you can also use the UltraTap Pedal in the same way as a typical rack processor or use it in an amplifier’s effects loop. The TRS EXP jack works with the Expression, Expression Plus Aux, Triple Aux, a MIDI Box, or a MIDI TRS cable, depending on how you set up the pedal.

A mini USB port enables connection to a computer for accessing Eventide’s Device Manager software or USB MIDI control, and five LEDs show which of the on‑board presets is active. These LEDs also take on secondary roles in setup mode, such as showing the MIDI channel or the bypass mode. There are two footswitches, Active/Bypass (which can also be set to load presets) and Tap/Preset, and these are similar in function to those on the earlier pedals.

Five presets can be saved on‑board but as with the other pedals in the range, up to 127 presets can be accessed via a MIDI connection. There are LED buttons above the Latching foot switch; Active can be set to latching or momentary action and Tap can be set to Tap or Store mode.

UltraTap comprises several processing stages: Pre‑delay, Chop, Taps, Slurm and an output wet/dry mixer. Slurm uses random detuning, modulation and diffusion smearing, to add an organic reverb‑like murkiness to the delays. Chop is a tremolo‑style amplitude modulator with a choice of Triangle, Sawtooth, Ramp, Square, or Sample and Hold ‘random’ LFO waveforms where the LFO can be sync’ed to the DAW tempo if required via MIDI Clock, or Tap may be used to manually set the LFO rate. The Chop knob also has two more ranges: Swell for shaping the start of the signal going to taps machine and Trigger for gating the end of that signal. Feedback sends signal from the delay output back to the start of the signal chain to create the usual additional repeats.

The sound quality is impeccable and there’s a lot of creative potential to explore.

The number of delay taps can be set from one to 64 using the Taps knob, while Pre‑delay time is adjustable up to one second. The Spread control adjusts the tap spacing such that values left of centre make the taps more closely spaced at the start of the burst, producing a progressive slowing‑down effect, whereas clockwise of centre, the taps appear to speed up. In secondary control mode, the Spread knob in conjunction with the Feedback knob adjusts the Chop and LFO parameters or the rise and release times of the swell and gating feature.

Taper adjusts the fade‑in or fade‑out character of the taps and Tone either darkens or brightens the sound of the effect. Accessing system setup involves holding down the Active foot switch and Page button switches during power-up and it is here you can select the MIDI channel, the bypass mode, MIDI Clock sync, external pedal function and more.

We’re all used to plug‑ins emulating hardware but Eventide have gone the other way with this pedal range by taking specific plug‑in algorithms and putting them into a pedal format, which is great news for those of us who play live. While UltraTap can produce conventional echoes and go some way towards replicating a multi‑head tape echo machine, it also excels at artificial double-tracking, dreamy ambient delays, vocal thickening and gentle tremolo, but it can also manage some not‑so‑subtle rhythmic sounds courtesy of the chopper.

The sound quality is impeccable and there’s a lot of creative potential to explore. It does take a while to digest what all the controls do, but considering the flexibility on offer, the number of controls and alternate functions has been kept to a minimum. For studio use the plug‑in version may still be more practical but if you want to take UltraTap to the live stage, this pedal offers a practical and compact solution.