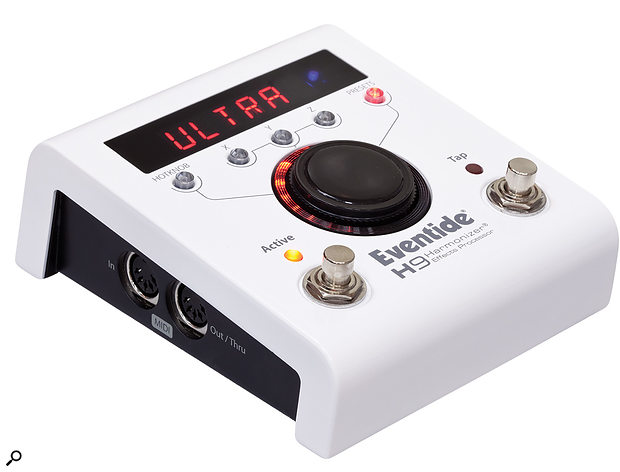 The latest addition to Eventide's stompbox range has the chameleon-like ability to emulate all of its siblings! Not only that, but the new H9 can be controlled and edited from your iPhone or iPad.

Eventide will need no introduction to recording musicians: their original Harmonizers have earned a place in studio legend, and they still produce some of the best pitch- and time-based effects in the business. Over the past few years, Eventide have applied their algorithmic expertise to the pedal market, and we've already looked at their superlative TimeFactor, ModFactor, PitchFactor and Space boxes. Now, the H9 and H9 Core allow the user to pick and choose from the algorithms that power those units, and combine them in a single pedal. What's more, two new algorithms called UltraTap and Resonator have been developed specifically for the H9. I had the full H9 here for review; the H9 Core is exactly the same but ships with fewer algorithms and at a correspondingly lower price.

There are fewer physical controls than on the company's previous pedal-style effects boxes, but to make editing and controlling the effects easier, there's an expression pedal/switch TRS jack on the back of the unit, as well as built-in Bluetooth. The latter enables cable-free control from an iPod Touch, iPhone or iPad running iOS 5 or above using the free-to-download H9 app. There's an Android version in the pipeline too, though that was not available when we went to press. USB control is also available from Apple computers running Mac OS 10.5 or later, again using freely downloadable software, though you'll have to source a suitable mini-USB cable as none is supplied. Comprehensive MIDI control is also catered for, permitting both patch changes and continuous parameter control. And for the guitarists out there, the pedal can also double up as a tuner, this mode being activated by pressing and holding both footswitches. The app also has a tuner display page.

The H9's all-metal enclosure is finished in white and, in addition to a bright LED alphanumeric display, sports five illuminated buttons labelled Hot Knob, X, Y, Z and Presets. A large but low-profile data encoder knob incorporates a push switch and has an LED ring position indicator. There are also two foot switches with status LEDs. The input and output gain can be adjusted for different applications, such as plugging into the effects loop of an amplifier, and there are LEDs to monitor both the Bluetooth status and signal presence/peaking.

Those two momentary-action foot switches can be used to enter tap tempo times during performance, to increment/decrement preset numbers, to bypass effects or to activate the tuner. They can also be used in conjunction with the other buttons to enter various setup modes. Bypass can be set to relay (hard-wired) or active (so effect tails aren't cut off when engaged). The relay provides an automatic hard bypass if the unit is powered down. Connectivity comprises stereo ins and outs on jacks, MIDI In and Out/Thru on five-pin DINs, a TRS jack for the expression pedal or switch, the mini USB port and a connection point for the included 12V universal voltage power supply. The unit automatically senses which inputs and outputs are in use and routes the signal accordingly, so you can use any permutation of mono or stereo in or out without having to change anything. 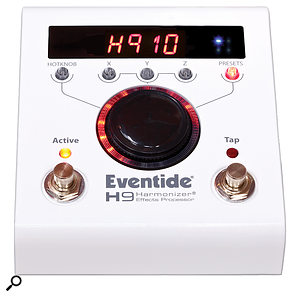 In addition to scrolling through presets, the function of the encoder knob varies according to which button is active. In many cases it is used to adjust parameter values, though it can also function as an alternative to a pedal in so-called Hot Knob mode, for real-time control over multiple parameters simultaneously. Buttons X, Y and Z link to the main three parameters for the current preset, and a simple press-and-hold operation gets you into Expert mode where all the editable parameters become available.

While it's quite possible to do all your programming using the panel controls, the software alternatives offer a far more intuitive experience, as you can view and interact with the algorithms using a pedal-style knob layout tailored to each algorithm, following the general paradigm of the stompboxes from which they were taken. The app also includes a virtual ribbon controller that does the same job as the external pedal or Hot Knob. Multiple parameters can be assigned for simultaneous real-time control via Hot Knob, pedal or app, each with its own minimum and maximum range settings. Delay times can also be set in beats or milliseconds, with the option to sync to MIDI clock when in Tempo mode.

The H9 holds up to 99 presets, and you have the ability to archive these to your iOS device so you can then load them in as you need them, either individually or in sets. Where you only need a small number of presets for a show, you can limit the number of presets viewable by setting the lowest and highest preset numbers.

One reason the price is so attractive is that although the unit comes with a very useful degree of algorithmic flexibility, you don't get everything that the pedal range offers unless you purchase additional algorithms from the iTunes store (Looper is not currently offered) at a cost of around £15 or $20 each. Don't worry if you are not sure which algorithms you need, though, as you can try any of them for five minutes each day free of charge.

A further saving can be made by buying the H9 Core. As I mentioned earlier, this is exactly the same hardware but with only one included algorithm and an on-line voucher to acquire one more free of charge. Additional algorithms can be bought, just as for the standard version. The Core is also potentially a perfect add-on for existing H9 users, 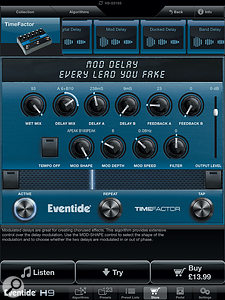 Most of the algorithms available for the H9 are drawn from those in Eventide's Factor series of stompbox effects, and new ones can be demoed and purchased as and when you feel the need. because up to five H9s can be linked to a single user account — and once an algorithm has been bought (including the ones that come included with the standard H9), it can be used on all of that user's H9s.

What you get out of the box with the standard version is a pair of algorithms from each of the four existing Factor and Space pedals, plus the UltraTap exclusive H9 algorithm. A further algorithm from the stomp collection, or the new Resonator, can be obtained after downloading the latest iOS control app and registering your pedal, giving you 10 effect algorithms to play with. It's only possible only to run one algorithm at a time, so owning the H9 isn't quite the same thing as having all four Factor pedals (Eventide are quite happy for you to buy more than one, of course), but many of its algorithms already comprise combinations of effects, so there's no sense of being unduly limited. The included effects offer some excellent reverbs, modulation, multi-tap delays, pitch treatments and so on, and are capable of being set to give both 'bread and butter' effects and some rather more abstract, textural treatments, so there's already plenty to go at with the H9 even before you buy further algorithms.

The existing algorithms have been adequately covered in the reviews of the original stomp pedals, but it's well worth taking a brief look at the two new ones. The Resonator essentially produces four delay taps, which can be switched to different patterns. Each tap is passed though its own resonant filter that can be tuned to any desired musical note. At higher resonance settings this is a fairly dramatic effect, but at lower settings it actually become nicely textural and could work in a lot of musical scenarios. UltraTap is worth exploring if only for the wonderfully entitled Slurm control (a Futurama reference, perhaps?). With this generating up to 64 delay taps that can either get progressively closer or further apart and either fade in, fade out or play at a constant level, there's a lot to work with here, and once again, the options range from extremely assertive to much more subtle effects.

The iOS side of the pedal is definitely worth exploring if you have an iPod Touch, iPhone 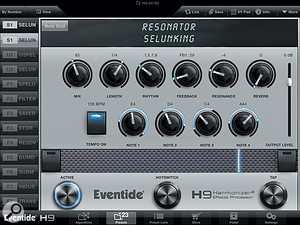 The Resonator (pictured above) and UltraTap algorithms are new additions to the Eventide effects range, and were created specifically for the H9 and H9 Core. or iPad, as the app goes further than creating and organising your presets to allow real-time parameter control for those players who can spare a few fingers from time to time. An X/Y pad allows any desired parameters to be assigned to the two axes of a graph, with a cursor that can be moved in any direction to create dynamically changing effects under real-time control. An information button for each algorithm explains the operation of the controls in an impressively straightforward way.

In addition to making editing and archiving presets so much more intuitive, the app also allows you to build and name your own custom set lists of presets, as well as providing easy access to the settings section. New algorithms can be purchased directly from within the app and there's a page showing all the available apps with the ones you don't have greyed out.

As shipped, the presets are perfect for showing off the range of effect possibilities, but because of that, many are perhaps a touch over-the-top for out-of-the-box use in a conventional pop/rock context; they may need to be tweaked to make them more applicable to your musical style. The app is ideal for this, as not only does it make adjusting the presets very easy but it also provides a means to save as many variations as you like, as well as making it easy to transfer your chosen presets into the pedal.

Eventide have tried very hard to make this pedal accessible to those players who prefer an easy life, but they've still provided scope for those who want to dig deeper. The sound quality is impeccable, as we've all come to expect from Eventide, and the amount of care and thought that must have gone into developing the control app is impressive. Eventide's YouTube tutorial videos are also most helpful in familiarising yourself with the operation of both the pedal and the app. In short, if you like your effects to have scope beyond the norm, the H9 is definitely worth a closer look.

There are a few multi-personality-style pedals out there now, as well as TC Electronic's ingenious Toneprint pedals that allow you to access new patches via your phone — but I think it is fair to say that nothing in the hardware world is directly comparable with the H9.

The H9 Core comes with only the H910/949 patch from the PitchFactor. Both versions of the H9 also come with a voucher which allows the user to purchase one more algorithm of their choice.

This is a thoroughly professional multi-effects pedal with many potential applications, whether in live-sound mixing, stage performance or studio work.