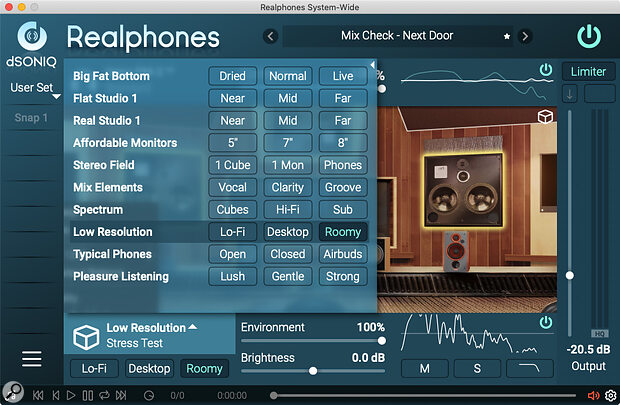 It’s been a year since I first reviewed dSONIQ’s Realphones, a plug‑in and ‘system‑wide’ application that combines headphone frequency correction with speaker and room modelling. Not only could Realphones apply an EQ curve to compensate for the deficiencies in your headphones’ frequency response: it could also simulate the experience of listening to studio monitors in a control room.

Developer Alexei Khaiminov has not been idle in the last 12 months, and Realphones has now reached version 1.7, with some significant improvements. These include support for Avid’s AAX plug‑in format, new headphone models and improved processing quality, plus the ability to have the plug‑in version automatically bypassed during offline bounces. The biggest developments, however, relate to the user interface, and specifically the introduction of a new Easy Mode.

One of the few negatives I picked up on in my original review (www.soundonsound.com/reviews/dsoniq-realphones) was the complexity that could make Realphones slightly intimidating to new users. There are a lot of parameters to tweak, of which some are rather obscure, and this can make it hard to decide on the ‘best’ setting. The idea behind the new Easy Mode is to hide most of these detailed editing controls, and instead offer a handful of preset options or broad‑brush parameters that adjust multiple controls behind the scenes.

Perhaps strangely, Easy Mode isn’t enabled by default, and you won’t know it’s there until you click on the three horizontal lines at the lower left of the screen. Do so, and most of Realphones’ sliders and dials disappear, leaving a large and friendly image of the virtual ‘Moscow Film Studio’ in which your music is heard. A single control labelled Environment sets the degree to which room simulation should be applied; buttons let you choose between three speaker sets, and a Brightness control provides global tonal adjustment. One further slider at the top of the window sets the extent to which your headphones are corrected, and there’s a simplified ‘mix check’ panel that lets you solo Mid, Sides or low frequencies.

One quirk of the original release was that headphone correction curves weren’t displayed. Now they are, and if you click the cube icon in the top right of the main image, you can view either the correction curve or the curve that the room simulation is applying in more detail. (Oddly, the cube icon is present in Easy Mode but doesn’t do anything there.)

Preset handling has also been changed. A pop‑up in Easy Mode presents 10 preset ‘monitoring banks’ — combinations of monitoring environment and modelled speaker settings — which are mirrored in the main preset menu. These are fixed and can’t be added to, but user settings can be stored in the Snapshot list, now located down the left‑hand side and featuring such luxuries as the ability to name snapshots.

For the most part, this is the sort of plug‑in where you’d populate a Snapshot list with your three or four most used presets and then just get on with things.

This dual system of preset management is perhaps a bit rococo, but in general Easy Mode is a very welcome improvement. I can well imagine that most users will be perfectly happy never to venture into the deeper waters of Advanced Mode; for the most part, this is the sort of plug‑in where you’d populate a Snapshot list with your three or four most used presets and then just get on with things. But if you do want detailed control and more advanced mix checking options, they’re all still present and correct. All in all, version 1.7 shows an impressive degree of refinement and responsiveness to user requests, and suggests that Realphones has a long and bright future ahead.

A welcome evolution of an impressive headphone correction and room simulation system.