Struggling to drive multiple set of cans? DACS have an amp for that...

British manufacturers DACS don’t rest on their impressive laurels; the company’s designers are always looking for ways of improving and enhancing their products, and this is ably demonstrated in the latest iteration of their four‑channel headphone amplifier, the Clarity Headlite 3+.

I reviewed the third‑generation Clarity Headlite 3 in June 2018 (www.soundonsound.com/reviews/dacs-clarity-headlite-3) and the 3+ is identical in its structure and most facilities, so I recommend reading that earlier review for more detail. But as an overview, like its predecessor the Headlite 3+ has four completely independent stereo headphone amplifiers with duplicated output sockets on the front and rear panels. Two pairs of inputs (A/B and C/D) are provided on the rear panel, each pair being switchable for ‑10dBV or +4dBu nominal input levels, and these can be used as either two stereo inputs, four mono inputs, or one stereo and two monos. Each headphone amp can select any of these inputs via rotary selector switches, with options of AB (stereo), AA, BB, (channel A to both ears, or B to both ears), CD (stereo) CC, or DD. It’s a simple system, but very versatile. A quartet of tri‑colour LEDs indicate the incoming signal levels on each of the four inputs.

I was pleased to see DACS took on board a suggestion I made in my Headlite 3 review, and have swapped the control knobs around so that the larger knobs now adjust the headphone amp volumes and the smaller ones select the input sources — a far more logical arrangement I think.

An internal linear mains power supply with a compact toroidal transformer (switchable for 230/110V AC) is connected to a rear‑panel IEC socket, and an illuminated power switch is on the front. The chassis is properly grounded via the mains safety earth but the audio circuitry’s ground is floating, to avoid ground loops. A large 4mm/binding post on the rear panel can be employed to tie the audio ground to a technical earth if required.

The rear panel inputs are switchable in pairs to work with +4dBu or ‑10dBV sources.

The versatility and sound quality of the Headlite 3 impressed me, and it gave plenty of output drive for most applications using traditional studio headphones. However, in my review I noted that the Headlite 3 had dropped the unique ‘power stage’ feature that had been fitted on headphone channel 1 of previous models. This was a high‑power output stage intended for driving multiple headphones wired in parallel, as is often required in orchestral sessions and the like. Apparently, DACS had found that this facility just wasn’t something its customers appeared to want back then, so deleted it as a standard fitting (although it was still available to order).

Almost inevitably, as soon as the feature was removed, interest in it suddenly surged! Today, insensitive planar magnetic headphones are becoming more popular and they need oodles of clean power, and of course pro studios do still exist and do still track orchestral ensembles with lots of players using headphones wired in parallel and fed from a common source. So DACS have updated the Headlite 3 (hence the ‘+’ suffix), reinstating the ‘power stage’ and refining the headphone amplifier circuitry slightly.

This time around, the power feature has been renamed as a ‘+Power’ module. As standard, a +Power module is installed only on output 1, and its presence is identified by a white securing nut around the headphone sockets front and rear (the standard outputs use blue nuts at the front and black at the rear). If desired, though, the Headlite 3+ can be ordered from the factory with extra +Power modules installed in any combination of the other three outputs as well. (As the headphone amps are simple plug‑in modules, it would be a fairly straightforward user‑retrofit to install +Power modules too.) 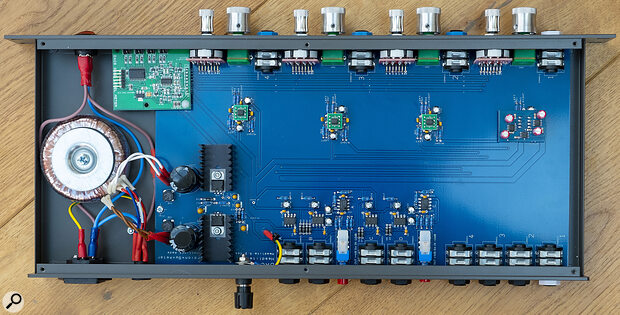 The physical headphone amplifier chips (OPA 1656s) for channels 2‑4 are on the three green plug‑in cards. Channel 1 on the right‑hand side is fitted with the larger +Power module, where the OPA1656 chip is supplemented with a pair of BUF634s. The circuitry at the bottom of the main board handles the inputs. The power supply is at the left, and the relatively complicated digital board (top‑left) controls the input level LEDs.

The Headlite 3 employed JRC 4580 high‑current op‑amps as the headphone output drivers, but the 3+ model uses OPA 1656 op‑amps as standard, which are low noise and have a high output drive capability. For the +Power output, the OPA1656 is supplemented with a pair of BUF635 buffers to increase the output current capability.

Whereas the standard headphone output drivers deliver a generous 0.5W RMS per channel (200mW per channel into a 600Ω headphone load), the outputs fitted with +Power modules raise this to an absolutely whopping 1.5W per channel. Both types of output have a notional 0Ω output impedance. All the other technical specifications of the Headlite3+ remain just as impressive as before, with a dynamic range of 114dB, THD+N below 0.0005 percent, frequency response from 5Hz to 40kHz (±0.5dB) and inter‑channel crosstalk below ‑90dB.

The Headlite 3+ remains a well‑built, well‑designed, high‑performance four‑channel headphone amp, and it retains all of the strengths of its predecessor while improving slightly on the quality of headphone amps and reinstating the ‘power stage’ as a standard feature on channel 1.

A small but significant improvement on an already great product.