The control room at Half-Ton Studios, after moving into the larger space but prior to upgrading the desk and monitors. There was some basic treatment in place, but more would be needed to address the low-end response.

A DIY approach to control room acoustics can go a long way, but sometimes it pays to get the professionals involved.

For this feature, I'm going to stray into somewhat new territory for me and talk about studio control room acoustics. In recent years I'd acquired some extra space in the warehouse where my studio is based, and needed to make some significant changes to the overall layout of the studio. These were dramatic enough to involve me moving the control room into what was the old live room. The move coincided with me upgrading my console and monitors, but despite feeling I had a decent enough understanding of the essential principles of setting up a good listening room, when I began to work in my new space I quickly realised I had some issues that went beyond my know-how, and made the call that I needed some outside help. I ended up working with acoustician Douglas Doherty from DACS Audio, and with his help I'm going to talk you through the process we went through to turn an initially quite problematic space into a very workable control room. The majority of the time — and money! — was spent on addressing the low-end balance in the room, and that's what I'm mostly going to be covering here.

In hindsight I really was asking for trouble. My new control room is quite square [see 'Why Are Square Rooms Bad?' box later], with dimensions of 4.4 x 4.3 m, with a height of 2.4m. It's a free-standing room built from stud work and plasterboard, with a Rockwool–filled 100mm cavity. I knew enough to know that this could create some issues, but without going into the details, there were a number of practical reasons why I chose to use that room to set up as a listening space.

As is so often the case in smaller rooms, it was the bottom end that presented itself as the major problem. There was an audible dip in low-frequency volume in the middle of the room, which was very close to where the listening position was initially set up. I was also quite underwhelmed by the stereo imaging, and despite being able to work, it was taking me longer than usual to sign off mixes. Despite getting used to these issues somewhat, it was also creating problems when working with other people in the room. Volume differences below around 120Hz were quite dramatic depending on where you were standing in relation to the speakers. And, whilst it can be quite handy to stick the bass player at the bass-heavy back of the room when mixing, if it's too much it can create communication problems!

After chatting with Douglas over the phone, he suggested the problems were bad enough that he would need to visit the studio and work out the best course of action. In our initial conversation, we talked about the practical concerns of my setup at the studio — like what I needed to retain, space–wise, in the room — and touched on the thorny subject of budget. It's important to make sure you're on the same page with this stuff, as acoustic solutions can vary in price dramatically. I explained that I had some experience with building my own acoustic panels and was confident, up to a point, that I could go DIY with much of the prescribed treatment to keep costs down.

When I met Douglas at my studio, his immediate concern — apart from the shape of the room! — was the location of my speakers. I had my monitors around three feet away from the rear wall, which put my listening position perilously close to the middle of the room. Douglas proceeded to quickly demonstrate to me why a small square room can be so problematic and why the middle of the room is possibly the worst possible place to put your listening position. Through my main ATC SCM20ASL monitors he played me a series of low–frequency sine waves — pure tones at a specific frequency — at 20Hz intervals and got me to walk around the room. The result was quite shocking. At 60Hz and 120Hz especially it was like someone was turning a volume knob up and down as you walked from the corner of the room to the centre. Later tests revealed there was as much as a 20dB difference at the extremes! As you can imagine, these two frequency ranges are pretty essential areas in a mix, and it was not surprising I'd been having a few issues getting bass guitars and kick drums to sit right. 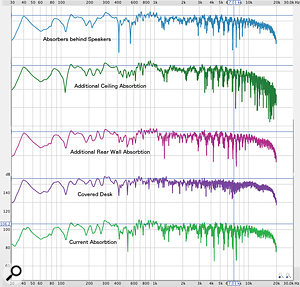 I'm not going to go into great detail about testing a room, but it's a relatively simple process if you have a decent-quality capacitor microphone. There are various free or inexpensive software packages available for testing and producing graphical information, and they typically will lead you through the process. I ended up using a program called Room EQ Wizard, and it did everything I needed it to do in order to get a handle on what the problems were. A word of warning though: when you start down this route of testing your space I think you need to be committed to seeing the project through. Unless...