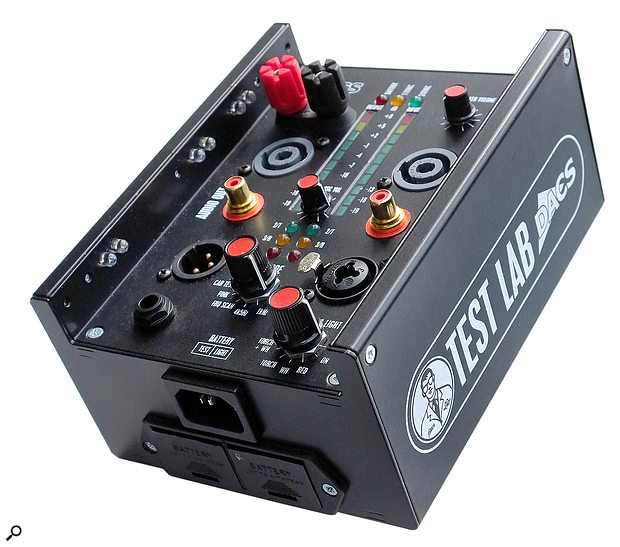 A decent cable tester is an essential tool for every studio and roadie tech, and the clever people at DACS recently launched their own, a unique design which has clearly grown from practical experience when installing and troubleshooting systems for their clients. Fundamentally, the Test Lab is an automatic cable tester, housed in a sturdy black-painted steel case with a non-slip base. It’s quite substantial (it measures 130 x 80 x 170mm and, with batteries, weighs 1.65kg), but is lift-able in one (large) hand, despite the lack of carry handle.

Most top-panel controls and connectors are protected by raised side walls, although the 4mm binding posts stand slightly proud. The socketry allows testing of any combination of three-pin XLRs, quarter-inch A-type jacks (TS and TRS), RCA phono plugs, and NL2 or NL4 Speakons. Given the substantial size of the unit, I’d have liked also to see provision for checking MIDI DIN plugs, 3.5mm mini-jacks, and video/word-clock BNCs too, but it’s obviously impractical to offer every known connector and a line must be drawn somewhere!

Cable testing simply involves plugging the cable into the appropriate Out and In connectors, and turning the mode switch to ‘Cab Test’. This starts an automatic test sequence in which each connector’s terminal is checked in a repeating cycle. Two groups of three LEDs indicate the send and receive connections, with green for pin 2/tip, orange for pin 3/ring, and red for pin 1/sleeve. Normally, the two sets of LEDs would illuminate in a matching sequence, but cross-wiring, shorts, or open circuits are revealed by mismatched, multiple, or absent LEDs, respectively.

A major challenge with conventional cable testers is checking an installed cable when the two ends can’t be brought to the test box. DACS have overcome that by supplying a remote female-XLR test plug, with three LEDs set in the end. The colours of these LEDs match those of the test box itself, identifying the relevant pin connections during the test sequence. If it doesn’t show a green-amber-red sequence, something’s probably wrong!

As the Test Lab’s cable-test facility only checks a maximum of three connections, there’s a potential problem with NL4 four-terminal Speakon plugs. DACS’ solution is to test the +1/-1 terminals as a simple two-terminal (unbalanced) connector, which covers most practical situations. However, if there are connections to the +2/-2 terminals (ie, +1/-1 to +2/-2, or +2/-2 to +2/-2), the bottom (sleeve) LED will also illuminate dimly. Not ideal, perhaps, but it’s better than nothing.

One of the features to set the Test Lab apart from most cable testers is the inclusion of a signal generator and built-in monitor speaker. The latter has a volume control and is a reasonably good-quality miniature speaker, but it would have been nice to have a mini-jack headphone output as well, to allow for critical quality listening or for auditioning when an audible output is inappropriate. A pair of bar-graph meters display the send and return signal levels, and the input meter starts to illuminate for signals above -15dBu. It has 10 LEDs which illuminate in 3dB increments up to +8dBu, but although the meter markings appear reasonably accurate with unbalanced signal sources, it under-reads by 6dB on balanced inputs, which is disappointing. On the upside, the Speakon input includes a 26dB pad to ensure the bar-graph meter is not overloaded when checking power-amp outputs.

The signal generator can be switched to produce constant pure tones at 70Hz, 1kHz, or 4.5kHz, or an automatic cycle looping around all three, with about five seconds on each one — these frequencies are well chosen for checking individual drivers in speaker arrays. A broadband pink-noise test signal is also available, and the test-tone output level can be adjusted from about -63dBu up to +6dBu.

For testing loudspeakers, the Speakon output (and parallel-wired 4mm binding-post output) is fed from a small internal power amplifier capable of delivering roughly 1W of power into 4Ω, or 750mW into 8Ω, which is easily enough to check whether a passive speaker is working or not.

A really neat inclusion, and one I’ve not seen elsewhere, is built-in illumination along the unit’s raised sides, switchable between red or white LEDs. These illuminate the control surface and connectors very well; the red light mode avoids degrading night vision when working in dark stage wings! An array of five more white LEDs is provided on the end panel to serve as a very decent broad-area torchlight, too. I often find myself using cable testers as bases to hold connectors when soldering cables, and the Test Lab is ideal for that, partly because its weight means it stays still, but also because the built-in side illumination is very helpful to see what you’re doing!

Power for the unit comes either from a pair of 9V PP3 batteries (one for the testing circuitry and the other for the LED lighting), or from a mains supply via a standard IEC inlet. The latter accepts 110V/240V mains supplies, and LEDs confirm that the supply is live (useful for checking fuses in mains plugs), and indicate the detected voltage (110V/240V AC). By separating the battery supplies for the lighting and audio test functions, if one starts to die at an inconvenient time it is easy to swap the batteries over to maintain critical functions until a replacement can be found!

It’s impossible to create a cable tester that meets the needs of every possible application with a size and price that make it cost-effective for everyone, so some compromises are inevitable, but I’ve identified a couple of areas where I think the DACS Test Lab could be usefully improved at minimal production expense. Nevertheless, I have to say that the Test Lab is already a very well thought-out and well-built unit, with some unusual, extremely valuable features. The lighting and torch functions are (excuse the pun!) absolutely brilliant, and the test-signal generator, combined with the metering and speaker, make it very easy to check signal paths thoroughly. For stage work, the ability to generate and measure speaker signal levels is also very handy.