There have been numerous recreations of the Minimoog in recent years, and the latest manufacturers to take a stab at this are UK newcomers, AJH Synth. Unusually, however, the MiniMod is a Minimoog in modular form, with each of its VCOs, mixer/VCF, VCA, dual contour generators, and noise/glide panels recreated as Eurorack modules. Its primary sound sources are of course its three VCO modules, which retain the original specification but extend it in interesting ways. So, where the original Minimoog oscillator allowed you to select just one of six fixed waveforms and play it within one of six frequency ranges, the AJH module provides independent outputs for its triangle, shark’s tooth, ramp and pulse waves, allowing you to direct these simultaneously to the destinations of your choice. It also provides variable pulse width with a CV input and associated depth control (which overcomes the Minimoog’s inability to produce ‘chorused’ sounds), plus sync, provided in two flavours that allow you to conjure a wide range of effects, including some that are sync-ish, but not quite sync. You can also modulate the oscillator’s frequency much more flexibly than on the original synth because, in addition to the standard 1V/oct frequency input, it provides both exponential and linear modulation inputs, each with ranges of ±5V and their own scaling knobs. 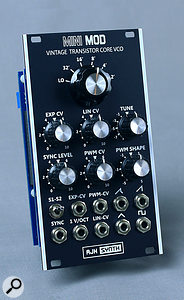 AJH explain that the MiniMod VCO is based upon the discrete-component design of the first few hundred Minimoogs, which was abandoned when the later models’ oscillators (often described as the CA3046- and uA726-based oscillators) were adopted. Apocrypha has it that the early design, while less stable than its successors, was better sounding, so AJH have taken this and implemented it using 21st Century components and standards in an attempt to retain the warmth of the original combined with the stability of modern devices.

I don’t have an early Minimoog so I compared the AJH VCO to the oscillators in my uA726-based instrument. To make this as meaningful as possible, I connected the output from one of the MiniMod VCOs to the external signal input of my Minimoog, opened the filter fully with no Emphasis and, after allowing both synths to warm up for a few minutes, fine-tuned them. I then played each of the waveforms on each oscillator (setting the AJH’s pulse waves to the correct duty cycles when appropriate) at each of the five audio frequency ranges. Although the precise character of the oscillators was (as expected) dependent upon the input levels in the Minimoog’s mixer, there were nonetheless small but consistent differences in tone when playing the AJH module. In particular, its triangle and shark’s tooth waves were a tad brighter at low pitches. But I very much doubt that you would be able to tell which was which in normal use; the differences between my Minimoog’s oscillators and those of an early model could be as great, if not greater.

Stepping beyond the Minimoog’s own capabilities was fascinating. With the sync switch on the AJH in the lower position you can obtain classic ‘hard’ sync while, in its upper position, all manner of strange effects occur — you can even get the oscillator to step through a staircase of pitches. Of course, there’s nothing stopping you from applying PWM while sync’ing the oscillator at the same time as sweeping its pitch in all manner of complex ways. Such is the power of modular synthesis.

Happily, I never needed to calibrate the VCO during the review; it was clean, stable, and tracked 1V/oct well. Nonetheless, I was pleased to see that its manual identifies the five trimmers that can affect its operation. But while it allows you to adjust the tuning, it warns you that the scaling, octave adjustment, high-frequency trim and shape trimmers are “for manufacturer adjustment only”. This is perhaps a mistake. Users are going to twiddle no matter what the manufacturer enjoins, so providing the relevant information might reduce the incidence of problems, not increase them. What’s more, the triangle wave on the second VCO in the review unit was slightly skewed, so it would have been nice to know how to correct this.

Finally, it’s worth noting that the AJH VCO accepts the pitch CV carried by some Eurorack power distribution buses. If your rack provides this, the module will be controlled by the bus unless you insert a cable into its front-panel 1V/oct socket.

The MiniMod VCO looks and sounds very nice indeed and, while there’s an awful lot crammed into its front panel, all of its sockets are placed underneath the knobs, which is a well-proven way of keeping the patch cables as far out of the way as possible. I understand that the black version shown here is outselling the silver one by a ratio of 4:1, and I’m not surprised because it’s much sexier and, in my view, well worth the slightly higher price. Sure, it’s not cheap, but I wouldn’t call it expensive either. It sounds great and it appears to be engineered with the same care as the Cwejman modules that, for me, still set the benchmark for Eurorack modules. If you’re planning to build a new Eurorack synth, or if you’re looking to extend an existing one, I recommend that you check AJH Synth out.