There are hundreds of reverb plug-ins to choose from, but none quite like Eventide's Blackhole... 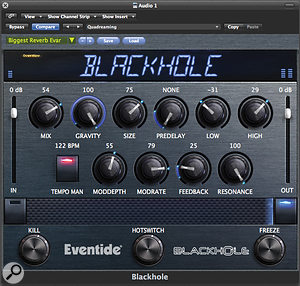 Based on their hardware stomp-box of the same name, Eventide's Blackhole native plug-in is described as a 'massive reverberator', and draws its inspiration from an algorithm first developed for their DSP4000 processor (the same algorithm was later included in the H8000). It runs on both Mac OS and Windows machines, with AU, AAX and VST plug-in formats supported. An iLok dongle is required, and a time-limited demo version is available so that you can try before you buy. Whereas most reverb effects are designed to emulate real spaces or plates, Blackhole is intended to create more abstract spatial effects for use in sound design or experimental music. If you're after a subtle plate to add to vocals or 'a bit of wet' for the drums, this is most definitely not the reverb to choose!

The reverb controls on offer mix the familiar with the weird. The Mix, Size, High and Low EQ and Pre-delay parameters all do what you expect, but the Gravity knob is not quite so commonplace. It turns out to be the Blackhole's equivalent of decay time, but it also switches the algorithm from a conventional reverb in one half of its travel to a reverse-envelope type in the other. At no time does the reverb time ever get short enough to be termed modest! Size, predictably enough, adjusts the subjective size of the synthesized environment, spacing out the reflections at higher settings and bunching them up at smaller settings. At the smallest size setting, the reverb sounds like the inside of a coffee tin!

There's also an innocent-looking Tempo button. When this is switched off, the pre-delay time is shown in milliseconds, up to a maximum of two seconds. In Tempo Sync mode, the pre-delay tempo is locked to that of the host DAW, and the Pre-delay value is measured in musical beats. In Tempo Manual mode, the tempo is set by entering your own numerical value, up to a maximum of 300bpm, the Pre-delay control again being used to set the beat division.

Of course, there's more to the Blackhole than big reverbs with tempo-sync'ed pre-delay. The weirdness factor comes largely from the reverse reverbs and the modulation section, where Mod Depth and Mod Rate parameters affect the reverb tail in a more-or-less chorus-like manner. Used gently, this can emulate the modulation found in more 'normal' studio reverbs, but there's enough range to produce more obvious churning effects. There's also Resonance, which peaks up the resonance of the high and low filters, so even the EQ is not as conventional as it might first appear. A Kill button mutes the the dry input to the reverb section, so you can audition the way the reverb tail decays, while Freeze mutes the input and causes the current state of the reverb tail to be perpetuated until the next power cut. Then there's Feedback, which just loops the whole shooting match, to further magnify the sense of enormity!

Ribbon and Hotswitch provide two different ways of moving between two sets of parameters you've set up. The former refers to a virtual ribbon controller which can be used to gradually morph between settings, while Hotswitch flips instantaneously. To use the ribbon controller, all you need do is move the ribbon to one end, press the adjacent button so that it lights up in blue, then set the controls to taste. Next, move the slider to the other end, make sure the button at that end is now pressed and active, and set different control positions. Now sliding from one side to the other will change the setting in a progressive way, creating the morphing effect. Blue circle segments appear around any controls that change during the morph and denote the start and end values.

I couldn't hear any obvious zipper noise when morphing, and had no problems automating parameters in Logic Pro. It doesn't seem possible to load up two different presets and then morph between them (although you could set the controls to the same settings manually) but many factory presets come with morphing parameters already set up, and user patches save the morph settings, so all you need to do is automate the ribbon controller to create a sense of change and movement. Programming the Hotswitch, meanwhile, entails holding it down until it flashes, then making the necessary changes to the patch. Once this is done, the patch will toggle between its original and modified settings whenever you press the switch — and these don't have to be the same settings as those available to the ribbon controller.

The best way to find out what this plug-in is capable of is to check out some of the presets, as many of these produce results that you might not expect to get from a plug-in with so few controls. Predictably enough, there are cavernous reverbs and modulated effects, but you'll also find eerie quasi-reverse reverbs, odd resonant effects, and even extended and filtered reverbs that sound more than a little like synth pads. The Feedback control introduces repeating, delay-like effects related to the Pre-delay and Gravity settings. Other presets include more dramatically modulated pitch elements for that 'drunk in space' vibe.

Because the reverbs are mainly long and textural, they work best on sparse instrumentation, and should prove a boon to anyone working on New Age material or film sound effects. I'm sure Blackhole will get a lot of use on my next 'music to soak lentils by' instrumental album. A simple clean guitar can be transformed into a vast atmospheric soundscape, but by the same token you can also turn things a touch sinister by heaping on the resonance, feedback and modulation depth, if you feel that way inclined. In fact. I spent rather longer playing around with the sounds than I intended to, a sure sign that I'm having a good time. Overall, I loved the massive reverbs, and also found the morphing ribbon to be a useful and creative tool. I'd love to write more, but I'm just itching to go back and play with it some more!

Eventide's Blackhole is a great special-effects tool, but don't expect it to behave like a conventional studio reverb!