Fishman have taken their popular Loudbox 100 and given it a fresh lick of paint, more powerful amplifiers and a welcome new effects section.

As a long-time, satisfied user of the original Fishman Loudbox 100 acoustic guitar amplifier, I was intrigued to see how the design had evolved to arrive at the Loudbox Artist. The power has been increased slightly, from 100W to 120W, and the livery has gone from grey to two-tone brown, but how about the sound and the feature set? 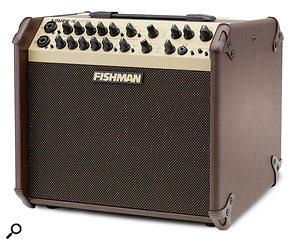 Like the Loudbox 100, the Artist is a true two-channel design, with independent gain, EQ, polarity and anti-feedback notch-filter controls for each channel. The EQs are of the fixed-frequency, three-band variety, with ranges of ±12.5dB for the lows (50Hz), ±10.5dB for the mid-range (750Hz) and ±12.5dB for the highs (15kHz). The low and mid-range filters are peaking types, while the high-frequency filter is a shelf. The anti-feedback notch filter can be swept between 15Hz and 330Hz, and can cut by up to 14dB.

A 100W amplifier drives the eight-inch paper-cone woofer, with a separate 20W amplifier feeding a one-inch, neodymium-magnet, soft-dome tweeter. The crossover frequency is at 3.5kHz, and SPLs of up to 113dB are achievable, so there's plenty of volume in hand over the amplifier's specified 80Hz to 20kHz range.

Fishman have managed to keep the size and weight of the amplifier manageable, with overall dimensions of just 340 x 405 x 290mm (HxWxD), and a weight of 11.3kg. The baffle is angled slightly to direct the sound upwards. There's no speaker pole socket in the base, however, so if you want to use it as a mini-PA, you'll need to use a stand, or look for a tall bar stool you can use to elevate the amp.

New to this model is the dual effects engine. With previous versions, you had to choose one global effect and stick with it, but here things are more flexible. Each channel can have its own amount of Effect A, which can be set to a choice of two reverbs, a delay or an echo. Then there's a button to give the option of also feeding the channel through Effect B, which offers two chorus settings, a flanger and a slap echo. Effect A has an adjustable Time control, while Effect B has an adjustable depth control. 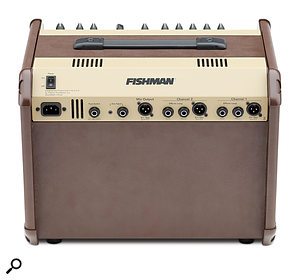 Each channel has an XLR/jack 'combi' input for accepting either mic or instrument/line signals. A 10dB pad button can be used to tame excessive input levels, and a clip LED in the centre of the pad button lets you know whether you need to use it or not. There's also a built-in high-pass filter that cuts low frequencies below 40Hz.

As with the previous model, there are separate balanced XLR DI outputs for each channel on the rear panel, plus one for the main mix. A footswitch input is provided for remote muting of the input channels or for the Effect B engine. The rear panel also has jack sockets providing access to separate effects loops for the two channels, the levels of which are optimised for typical guitar effects.

A stereo aux input (on both quarter-inch and 3.5mm stereo jack) allows such things as MP3 players to be connected, and this is internally summed to mono. The aux input has its own level control next to the master volume control, but note that this input remains live even when the mute is applied, so you can play recorded music during the break. There's also a headphone outlet (use of which mutes the speaker), a trim pot to adjust the tweeter level, and a global phantom-power button. This only supplies 24V, however, rather than the usual 48V, so may not be suitable for all capacitor microphones or active DI boxes. Mains power comes in on an IEC socket on the back panel.

In most areas, the Artist model just adds a little gloss and polish to what the previous Loudbox version offered. The sound quality is extremely clean and solid, both for vocals and for acoustic instruments, and the low end of an acoustic guitar comes across far more strongly and with more depth than you might expect from such a small cabinet. Although basic, the notch filter helps address the worst of acoustic feedback problems without having too much of an influence on the tone, while the extended effects section is most welcome. The Effect A reverbs and delays are well suited to general-purpose use, and the ability to adjust the time of both the delays and the reverb is far better than the fixed presets of the original Loudbox. Being able to then also route the signal to the Effect B engine is the icing on the cake — a touch of delay or reverb with a gentle chorus on top sounds quite magical.

Adjusting the tweeter level varies the presence and airiness of the sound, and being able to back it off also helps to tame the 'quacky' sound of piezo pickups. In fact, there's not much to criticise in this amplifier, although I'd happily have traded the flanger for a phaser. I would also have felt more comfortable with standard 48V phantom power.

The various DI options make it easy to add extension powered speakers for larger venues, or to feed a front-of-house PA system, and the DI outputs are phantom-power tolerant — an important factor when interfacing with PA mixers.

Summing up, then, I love the look, the solid feel and, above all, the sound of this little amplifier, which gives the market leaders a run for their money but costs around half the price. I think this model will stay in the Fishman catalogue for quite a while.

Further down the food chain, there are some very nice little acoustic amps from the likes of Vox and Laney, while at the more rarified end of the price spectrum, AER and Schertler still seem to dominate.

A worthwhile improvement on the earlier version, for not too much more money. The Loudbox Artist compares well with the established market leaders, yet costs significantly less.