Fishman’s Telecaster version of their Fluence pickups. The treble pickup certainly doesn’t suffer from a lack of level!

When they arrived last year, Fishman’s Fluence pickups were a revelation. Boasting a completely novel construction method using traces printed on stacked circuit boards in place of traditionally wound coils, they offered active circuitry, hum cancellation, a choice of two distinct voices and — most surprising of all — convincingly traditional sounds. Not bad for a first entry into the world of electric-guitar pickups from a previously acoustic-only outfit. Fast-forward to 2016 and Fishman have greatly expanded the range. Alongside the original Strat and humbucker sets, they’ve added a range of metal-voiced humbuckers for six-, seven- and eight-stringed guitars and, for more traditional tastes, this Gristle-Tone Telecaster set.

Part of the Fluence Signature series, these pickups bear the name of Greg Koch, the accomplished Telecaster wrangler, recording artist and long-time Fender product demonstrator. While other Fluence pickups are available individually alongside optional battery packs, these pickups come as a complete set. Alongside the neck and bridge pickups, there’s a factory-assembled control plate, providing volume and tone pots, a three-way pickup-selector switch and a recessed button to access the two different voicings. This assembly also houses the active electronics and a rechargeable battery. Completing the package, there’s a circular output-jack module with a micro USB port for charging the battery using any standard 5V USB mains adaptor. A small green/red LED indicates charging status and will flash a warning when the battery is low. This makes charging perfectly convenient and Fishman say that a single full charge will provide up to 250 hours of playing time.

The Gristle-Tone set is designed as a direct drop-in replacement for Fender Telecaster guitars and the many others styled in their image, so no physical alterations should be necessary unless your T-style guitar has unusually shallow routing in the control cavity. Connecting the pickup and ground wires to the control assembly is the only soldering necessary, as the output jack attaches via a push-in connector. As well as preserving the physical integrity of your instrument, this Fluence set is commendably discreet and low-key in terms of aesthetics, with a subtle logo on the bridge pickup the only overt flourish — a sensible approach given the staunchly conservative views of the typical Tele traditionalist!

In use, the pickups bear out the extremely favourable impression left by the Fluence Strat set, delivering a palette of full, clear and musical tones cast in the traditional mould. As always, a set of pickups can only work with what it’s given and your mileage may vary depending on the instrument you install them in, but I’d say that the Gristle-Tones are likely to please the majority of Tele enthusiasts. Neither the most febrile and twangy Tele bridge pickup I’ve encountered, nor the most dark and Broadcaster-esque, this one sits comfortably in the middle. Jangly but full, it can handle country picking well enough but really excels in doling out muscular riffage and stinging lead lines, with considerably higher output available than the average vintage-style Tele set. 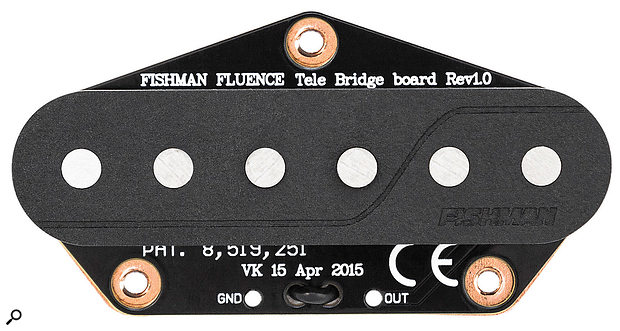 The Telecaster neck pickup is often maligned as being underpowered and dull-sounding. In this Fluence incarnation, that’s certainly not the case, though there is a drop in perceived output compared with the bridge pickup. More jazzy and rounded in character, it still possesses plenty of Fender-esque bite and, as with the bridge pickup, the string-to-string definition is very good. With the pleasingly full and plunky mixed pickup setting in between, these two pickups provide a very impressive and versatile sonic array. As we’ve come to expect from the Fluence range, noise cancelling is good though not superhuman — stand right up to your laptop screen or valve amp and you’ll pick up some noise. But in normal conditions they succeed in taking hum out of the equation while maintaining a convincingly single-coil sound.

The only criticism I can really level at the Gristle-Tone set is that the two voices — billed as ‘White Guard’ and ‘Black Guard’ — offer a big change in volume but only subtle tonal variation. Roll back the volume knob (which, incidentally, is very smooth with minimal treble roll-off) and you’re more or less back where you started. The louder ‘Black Guard’ voice, which drops the resonant peak from 3.2kHz to 2.6kHz, according to Fishman’s literature, does provide a very slight reduction in treble that becomes more noticeable at louder playing levels, but it would be a mistake to approach this pickup set expecting two radically different ranges of tones. As it stands, the discreet voicing switch acts as a very handy solo boost with no pedals required.

All in all, the Gristle-Tone pickups have plenty to recommend them. The price looks a little high compared to the rest of the range, but then this package does include the rechargeable battery as standard — an optional extra elsewhere but one definitely worth investing in. I can see this set appealing to session players and serious semi-pros looking for a range of powerful, high-fidelity Telecaster sounds.