These active, noise-cancelling pickups employ a radical new construction technique and offer not one, but two classic single-coil tones.

Fishman are probably the best-known name in transducers and pickup systems for acoustic instruments. Company founder Larry Fishman suggests in the marketing material for his latest products that he deliberately steered clear of the “can of worms” that is the electric guitar pickup until he believed he had something genuinely new to bring to the table. Well now he has: the Fluence pickup line is the company’s first range of products intended solely for electric guitars.

The basic design of the electric guitar pickup has changed little since the 1950s and the vast majority of players still want the same traditional sounds — the 1957 Fender Stratocaster and 1959 Gibson Les Paul being perhaps the most commonly cited reference points. The result is a market that’s saturated by largely similar products, whose small differences in design, construction or materials are trumpeted as the key to capturing ‘that sound’. 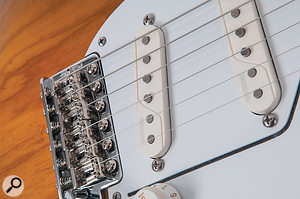 The high end is dominated by ‘boutique’ manufacturers whose handmade pickups, scatter-wound coils, specific gauges of wire and exotic grades of Alnico magnet must surely (we’re told, and tell ourselves) stand a better chance of capturing the magic of those vintage tones. That’s not to say it’s all snake oil; I’ve tested dozens of sets of hand-wound pickups for workshops large and small on both sides of the Atlantic and, by and large, they’ve delivered the goods. Nevertheless, there is an awful lot of hype surrounding these relatively simple constructions of magnets and wire.

Given the hand-wound hegemony that’s currently ruling the pickup world, Fishman have bravely chosen to take the opposite approach. Countering scatter-wound alchemy with the appliance of science, they’ve borrowed a construction technique that’s used in the precision manufacture of coils for a variety of non-musical applications. The Fluence pickups’ coils are not wound around a bobbin or former but rather applied or ‘printed’ like traces on a circuit board, and 48 of these circuit boards are stacked to form what’s called a Fluence Core. In the case of the Fluence Single Width Pickups on review here, two Fluence Cores are mounted one on top of the other, so as to cancel hum, with a spacer in between and six Alnico-IV rod magnets through the middle. (Designed for Fender Stratocaster-style guitars, these Fluence Single Width pickups are the first in the new line, but more will follow, with classic- and modern-voiced Alnico humbuckers and metal-oriented ceramic humbuckers on the way, each with two voices to choose from.)

The big advantage of building the pickup in this way is that the coil construction becomes not only completely controllable, but also completely repeatable — and that means that every set should sound exactly the same. Fishman apparently spent a long time analysing the resonant response, magnetic flux and other properties of vintage pickups (having first used their ears to select sets that presented the desired sound!) and then had to figure out how to reproduce these variables using their new construction technique. 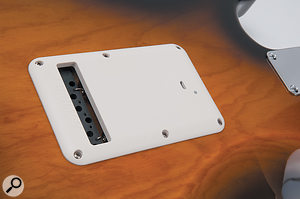 The optional rechargeable 250-hour battery pack is slim and just as unobtrusive as the pickups themselves.According to Fishman, the design of the coils and formulation of the magnets forms the basis for the Fluence pickup’s tone. There’s an extra element in play, though, in the form of the active electronics mounted to the back of the bridge pickup. Fishman say that they had always planned to make their first electric guitar pickup active, so as to solve any problems relating to cable capacitance, but the preamp also actively shapes the sound of the pickups to offer two distinct voices: Vintage Single-coil and Hot Texas Single-coil. The latter beefs up the output and drops the resonant peak from 4kHz down to 3kHz. It’s worth pointing out that this is still a completely analogue system, using exactly the same basic principals as existing electric guitar pickups — so the leap of faith it asks of change-averse guitarists is a small one!

When you install the pickups, you have the option of wiring in a switch or push/pull pot to switch between the two voices on the fly, or you can choose to set them one way or the other and leave it at that.

The Single Width pickups are available singly (in which case, the preamp sits on the back of whichever pickup you choose — there’s no passive option) or in a set of three. An optional rechargeable lithium-ion battery pack is available, and it’s another neat piece of design. Inconspicuously replacing the spring cavity plate at the rear of a Stratocaster, the battery pack is very slim indeed. Battery life is quoted as 250 hours and the battery will apparently recharge from a USB adaptor in three hours or less.

If you don’t want to spend the extra cash, the Fluence pickups will run off a regular 9V battery for a similar length of time. However, the battery pack is so convenient and feels so much part of the package that, if you’re going to spend the money on a set of Fluence pickups — which are not cheap, albeit comparable with the costliest hand-wound sets — spending an extra £$100 on the battery pack feels like it could be worth it in the long run.

Before talking about how any pickup ‘sounds’, it’s worth reminding ourselves that the electric guitar pickup is not a sound creation device any more than a microphone is. It’s a transducer that converts the vibration of the guitar strings into an electrical signal that can be amplified, albeit one that colours the signal considerably more than the average condenser mic! The point I’m making is that any pickup can only work with the guitar on which it’s installed, and the same pickups in a very different guitar will not sound the same.

For this review, the Fishman Fluence Single Width pickups were supplied installed in a Fret-King Corona 60, a well-made Strat-style guitar that should give them every chance to impress. For A/B comparison purposes, I pitted the Fluence pickups against two other sets installed in Fender Stratocasters — Bare Knuckle Pickups’ hand-wound, vintage-style Apache single-coils and IronGear Pickups’ Texas Loco single-coils, a machine-wound but good-sounding set of hot, Texas-style pickups. You can listen to some audio examples on the SOS web site (http://sosm.ag/mar15media).

So, caveats aside, how do the Fluence pickups sound? In a word, excellent. Whatever analysis and R&D has gone into the design of these pickups has clearly paid off, as Fishman have succeeded in capturing what most players would agree are the most desirable qualities of the Strat-style single-coil. In vintage mode, every position on the five-way switch delivers just what you’d expect. While it’s impossible to please everybody when it comes to such a personal thing as guitar tone, to my ears the balance of frequencies is very well judged and really does capture something of the fabled vintage Strat tone.

The Stratocaster’s detractors like to characterise its sound as thin, harsh and brittle, but if you’ve ever come into contact with a genuine 1950s or early ‘60s Strat (something that has become more and more unlikely as their market value has escalated) you’ll know that the best examples combine twang and bite with sweet mids and full bottom end. There’s a fullness to these Fluence pickups too, underpinning a clear, open-sounding top end, but the overriding impression I get is a sense of smoothness, solidity and coherence to the tone.

The jump to the ‘Texas’ voicing is more subtle than you might expect — yes, there’s a goodly amount of additional output and a fuller, firmer mid-range, but the clear highs and overall Strat-y character are maintained. That’s something you often can’t say for overwound, Texas Strat single-coils made the old-fashioned way, which in many cases sacrifice clarity and brightness for extra output and mid-range muscle.

On a practical front, because the two Fluence Cores within each pickup are essentially identical, the noise cancellation achieved is very good. The active electronics make cable capacitance a non-issue, while rolling back the volume pot results in no loss of high frequencies. For anyone used to conventional single-coils, noise-cancelling pickups can feel a bit unnerving. The lack of noise and the additional sense of control, especially at high volumes, is so marked that it’s natural to wonder if, at the same time, something has been lost: some ‘air’; some unpredictability; some character. But A/B’ing the Fluence guitar against the two ‘control’ guitars confirmed that it’s only the undesirable elements that have been eliminated, while giving away nothing in terms of tone and dynamics.

Given just how well these pickups perform, it might seem a little strange for me to admit that I initially felt a bit underwhelmed by the Fluence Single Width pickups. I’d followed the launch publicity closely and was genuinely excited at the prospect of someone doing something different in the field of electric guitar pickups. But these pickups are nothing if not deeply traditional in terms of sound and performance. That’s right — all Fishman have done is use a completely new construction technique, which offers greatly improved accuracy and consistency, to build a noiseless, active pickup that brilliantly captures not one, but two desirable sounds.

Well, I say ‘all’ — but that’s actually pretty impressive, isn’t it? The very familiarity of the Fluence pickups — the fact that they sound and feel just like regular pickups — is perhaps their biggest achievement. I’ve encountered noiseless pickups that do nearly as good a job of delivering the open sound of a traditional single-coil, but I’m really surprised to find an active system offering the same sense of liveliness and dynamics as the ‘real thing’. I’ve no doubt that Fishman will get around to exploring the outer limits of what their new construction technique can do, perhaps putting a wider range of tone-shaping possibilities at the guitarist’s fingertips. For now, though, they’ve given us a high-end, high-performance set of single-coils that can be recommended on three counts: as a noiseless set of pickups for studio and stage use; as a way to add a second tonal voice to your guitar; and as a great set of pickups in their own right.

In each case, the two guitars were plugged into a Kemper Profiling Amplifier using identical settings and recorded via the Kemper’s S/PDIF output with no additional processing.

These audio examples illustrate how closely the Fluence pickups match and even out-do traditional single-coil pickups:

Fishman haven’t tried to completely reinvent the wheel, sticking to the traditional sounds that guitarists want and really delivering. But their innovative construction method promises total consistency, and the two distinct sounds, excellent noise cancellation and active electronics are big plus points.