The man behind well-known French mixing console manufacturers Freevox has created a preamp — and it sounds très bon! 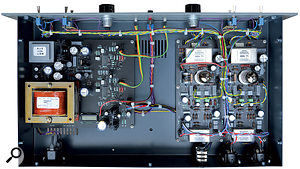 Lifting the lid on the PML200E reveals the Lundahl input and output transformers, the E88C valves, and the LCD 'hour meter' (the last is located top left, on the PSU board).

GP Electronics is probably not (yet) a familiar name, but one of their designers, Gérard Poncet, was the founder of French console manufacturers Freevox, who made highly regarded PA, disco and local radio consoles throughout the '70s and '80s. Monsieur Poncet is also an accomplished saxophonist, with albums produced by Alan Parsons, amongst others! Poncet's partner in GP Electronics is Christian Bubendorf, an electronics engineer and founder of the hi-fi company Ceres Audio. Unlikely as it sounds, the link between Poncet and Bubendorf was the fact that Ceres Audio also act as a distributor for Lundahl transformers, and Poncet wanted to use this high-quality iron in his preamp.

GP Electronics currently have only two products in their portfolio: a dedicated hybrid FET/Valve/transformer DI unit called the DI S1000, and the dual-channel hybrid mic preamp/DI, reviewed here. The PML200E has been designed from an 'audiophile' perspective, with audio quality at the top of the design agenda. The minimalist hybrid circuitry involves a combination of discrete Field Effect Transistors (FETs) and a dual-triode valve working in a class-A configuration. The valve is the E88CC, which is a long-life version of the ECC88 double triode. Its use is not a sop to nostalgia, but is claimed to be about achieving the desired sound character. Passive components from highly respected brands such as Arcol, Takman and Clarity Cap have been selected, and particular attention paid to their sonic quality and reliability. There's also a 'Prestige' version of the PML200E which uses special copper/silver wiring with PTFE insulation — again with a claimed sound benefit. The input transformer is a 1:5-ratio Lundahl LL1538 and the output transformer a 1:1 Lundahl LL1588.

Enclosed in a strong steel chassis, the 2U rackmount PML200E extends 250mm behind the rack ears. It weighs 6.2kg and its internal build quality is exemplary, with beautifully neat wiring harnesses and two high-quality circuit boards. One carries the electronics for both audio channels, while the other hosts the power supply and the peak warning LED drivers based around LM339 comparator chips. The mains transformer is a surprisingly large laminated core type and — a very nice feature — there is a small LCD hour-meter on the PSU board to log the operating time (the review model had run for about 67 hours).

The PML200E's rear panel is very straightforward, with XLRs for the main inputs and outputs, plus an additional 'aux' output for each channel on a quarter-inch TRS socket. The mains inlet is a standard IEC with integral fuse and mains voltage fixed in manufacture (230 or 115VAC), so not user-adjustable. The unit consumes about 23 watts, and the transformer-coupled microphone input impedance is 1.8kΩ, with a maximum input level of -15dBu.

With a source impedance of 300Ω and a maximum output level of +26dBu, the XLR line output is transformer-balanced and floating. Nominal operating level is +4dBu, but the User Manual (comprising three sheets of A4 paper, printed on one side only!) refers to adjusting gains until the front panel peak light turns orange at +12dBu. Unusually, the wiring details printed on the rear panel of the review unit state that the XLR is wired with pin 3 'hot' — which is contrary to the current international standard of pin 2 'hot'. Images on the company's web site suggest that this label has been revised on current production units, to reflect the proper standard! The review unit measured polarity-correct with the phase switches in the 'up' position.

The 'aux' outputs on TRS sockets are also transformer-balanced, with the same nominal operating levels, a slightly lower maximum output of +24dBu and a slightly higher source impedance of 600Ω.

An industrial retro style is used for the front panel, with a battleship-grey paint finish and very clear white legends. Facilities are fairly minimal, with the two channels' controls being laid out in a mirror image around the central power on-off push-button with associated red LED.

The black, fluted gain-control knob has a smooth, continuous action, and a slightly ambiguous dual scale. Gain range for a microphone input spans 65dB, and 30dB for the Line-DI input (see below). An LED indicates the output signal level, illuminating green at around -20dBu, but turning orange when the level reaches +12dBu, and red above about +20dBu.

Three flat-blade toggle switches introduce an output polarity-reversal, 48V phantom power (with a red warning LED) and an adjustable high-pass filter with turnover frequency options of 120Hz, 60Hz and 'off'. A quarter-inch TRS socket caters for balanced or unbalanced line or instrument inputs (the signal is switched automatically when a plug is inserted in the DI socket), with an impedance of 800kΩ and a maximum input level of +5dBu.

The PML200E's bandwidth for a mic input is claimed to extend between 10Hz and 100kHz with a ±0.5dB tolerance (and 30Hz to 80kHz ±2dB for the DI input). My measurements weren't quite as good as that, but weren't far off. The -3dB point was 11Hz and the -0.5dB bandwidth stretched from about 20Hz to 55kHz, with gentle roll-off beyond those limits. The transformer-coupled output was sensitive to loading, as you'd expect, exhibiting a mild roll-off above 35kHz when loaded with 600Ω, and a modest resonant peak above 60kHz with 200kΩ. Effective input noise (EIN) measured 132dB at maximum gain and 107dB at 40dB of gain. The specifications claimed THD below 0.1 percent for nominal output levels, but at maximum gain I measured levels between 0.15 and 0.5 percent. At a mid-gain setting (approximately 40dB), the THD curve was different, but not significantly better.

I measured the maximum gain for the two channels as 64.6 and 63.5 dB, and that 1dB offset seemed fairly consistent across all scale markings. Close to the minimum gain setting, the level falls away rapidly, effectively providing an 'off' position. The phase response is, again, not untypical for a transformer-coupled device, exhibiting +20 degrees at 20kHz and -40 degrees at 20Hz. A distortion-product ratio plot revealed a strong second harmonic at lower levels, with a steady and progressive rise in the second, third, fourth and fifth harmonics as the signal level nears the overload point. The noise floor sits comfortably below -90dBu at maximum gain across most of the audio band, with most mains-related harmonics remaining under -80dBu. At a 40dB gain setting, the noise floor fell below -100dBu (and approached -120dBu at mid-range frequencies) with the only significant mains-hum component at 50Hz below about -88dBu. This is a very good result. For more detail about the preamp's technical performance, I've placed a number of test plots, taken with an Audio Precision Analyser, at /sos/sep12/articles/gppml200emedia.htm.

The PML200E is a very well-constructed mic preamp, with all the essential facilities but no frills. The gain matching between channels wasn't quite to the standard I'd expect for a product at this price, but the use of continuously variable controls allows very accurate matching for stereo operation, given an appropriate test signal and suitable metering.

This preamp has an old-school sound character, with a subtle but noticeable combination of 'iron' and valve warmth providing a subtle richness and fullness, particularly through the bass and lower mid-range part of the frequency spectrum. This is just what I'd expected with two Lundahl transformers and a double-triode in each channel, not to mention the class-A topology, and I wasn't disappointed at all. The high end has a smooth, creamy quality, and the preamp responds nicely to being gently overdriven. The high-pass filter turnovers are also well chosen and effective in reducing unwanted rumbles and mid-range-muddying frequencies.

The gain range is sufficient for most applications, at a relatively generous 65dB, but the control response is non-linear, with most of the gain happening in the top half of the control's rotation. This is common on budget preamps, but while the control range is perfectly usable here, this 'gain bunching' is disappointing. Unusually, the signal is actually attenuated at the bottom end of the scale, providing an effective 'off' function! The DI input gain range is well chosen, but the +5dBu maximum input level means it's of little use as a line input. However, the FET input stage sounded very good on electric bass and guitar.

Overall, this is a very nice product with an elegant and high-quality design, impressively manufactured, and with a delightful sound character. It looks and sounds old-school, which is no bad thing, to my mind, and is very desirable as a preamp with some audible body and soul. Well worth serious auditioning.

There are a number of high-end mic preamps competing in the same market sector as the GP Electronics PML200E, including all-valve products like the Manley Dual Mic-Pre, Tube Tech MP1A and Thermionic Culture EarlyBird.

This two-channel mic preamp includes DI inputs, and uses a hybrid combination of FETs and triodes as the active devices, along with expensive Lundahl transformers in and out. Built to very high standards, it achieves impressive performance specifications for a device of this type.