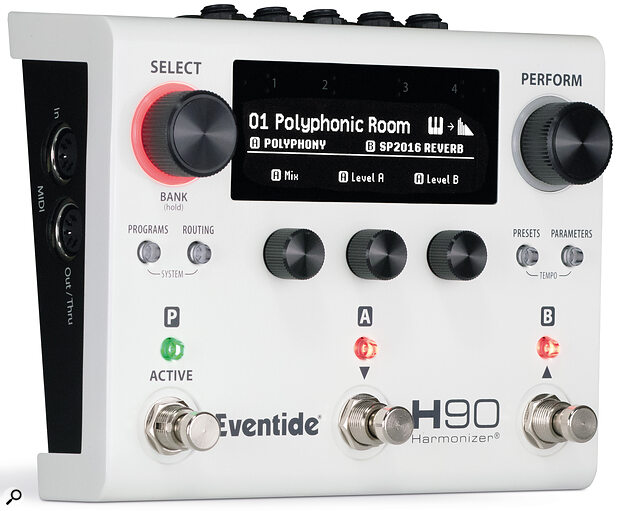 With its astonishing array of new and cherished effects, Eventide’s ‘everything pedal’ should appeal to guitarists, synth heads and mix engineers alike.

Eventide’s new H90 Harmonizer isn’t exactly inexpensive as effects pedals go, but you do get an awful lot for your money. It’s a very powerful multi‑effects pedal that can best be thought of as being the equivalent of two of their H9 Max pedals (it has two processing engines, each of which can run its own algorithm) but with considerably more processing power, a significantly extended set of algorithms, and some other new features.

Employing ARM‑based DSP architecture related to that of the flagship H9000 Harmonizer, the H90 has enough processing power to run very low‑latency, true polyphonic pitch‑shifting algorithms based on Eventide’s SIFT (Spectral Instantaneous Frequency Tracking) technology; this sidesteps the warbling artefacts that you hear from devices using conventional ‘loop and crossfade’ techniques. Improvements have also been made to the existing pitch‑shifting algorithms. As with the H9, there’s also the option of software editing on a Mac or Windows PC using the free H90 Control software, plus there’s Bluetooth support — though at the time of writing the H90 Control app for mobile devices had not yet been released.

The H90 ships with updated versions of all the algorithms from the H9 Max bundle, but adds several new effects, named Polyphony, Prism Shift, Bouquet Delay, HeadSpace, Weedwacker, Even‑vibe, Wormhole, Instant Flanger, Instant Phaser, and SP2016 Reverb. Several of these are completely new, but as their names imply the last three are based on established high‑end Eventide products. Eventide also say that, as was the case with the H9, new algorithms will be made available as they’re developed. (Top of my personal wish list would be some granular delay effects!) It’s not just about the new effects, though, and Eventide tell us that “the H90 includes new features and enhancements, such as quantisation and improved pitch‑tracking, as well as additional features previously only available on the dot9 pedals and plug‑ins.”

There are over 99 factory Programs, and the same number of user Programs. (By default the latter are the same as the factory ones.) A Program comprises the two algorithms (one for each engine), their settings, their routing and other relevant parameters, and you can access Programs that aren’t in the user list using the pedal’s Programs menu or the H90 Control app. The user can also create Playlists, which arrange multiple Programs in a sequence that’s convenient for a live show — again, different Playlists can be accessed either from H90 Control or from the pedal, this time using the System menu. Note, though, that you can only create new Playlists using the software.

The two engines can be configured to process the signal in series or in parallel, with the option of ‘spillover’ between Programs when changing presets, and with a choice of relay or buffered bypass. There are also various I/O configurations, and these include a choice of line or instrument level operation, as well as configuring the additional I/O as two mono inserts (or one stereo insert) that can be positioned anywhere in the signal chain — this makes the H90 equally suitable for use on a guitar pedalboard, in a synth rig, or for more general use in a studio’s recording/mixing setup. A Dual Path mode allows the processing of two independent stereo signals at the same time, and if you need more real‑time control there are two expression inputs for pedals, and there’s support for auxiliary switches with up to three buttons. The H90 also ‘understands’ CV signals, which again should mean this pedal holds plenty of appeal for modular synth fans. Meanwhile, guitarists should be pleased to find a tuner is built in, since it means they can also ditch their existing tuner to free up...