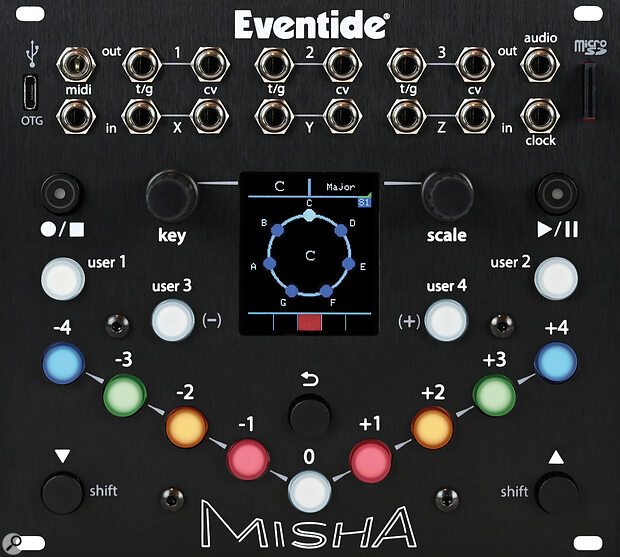 Considering how wide‑ranging the art of sequencing is, rewarding all manner of approaches and philosophies, it’s no surprise that sequencers themselves come in all shapes and sizes. Sequencing is such a fundamentally simple process, but one that somehow continues to prompt new discussions, and yield new techniques to this day. Eventide Audio have now thrown their hat into the ring with Misha. An “interval‑based instrument and sequencer for Eurorack” is what it says on the tin. While this is certainly correct, it’s but a hint of the possibilities contained behind Misha’s sleek 28HP faceplate.

To understand what Misha is best at you need to understand the concept of a tone row. Pioneered by the serialist composers a century or so ago — specifically Arnold Schoenberg with his 12‑note tone row — a tone row is (at least, in simple terms) a sequence of notes with equal emphasis on each, in which no note can be repeated until all the other notes in that sequence have been played. Schoenberg called it a “method of composing with 12 tones which are related only with one another”. It follows, then, that Misha is a sequencer whose every movement is based on the relationship between the current note and the note before. Sure, Eventide haven’t religiously stuck to the tone row principle, but for that I daresay we should thank them.

Misha’s interface is based around the aforementioned row of buttons, as well as four user‑assignable buttons (octave jumps, semitones, undo and the like) and a generously‑sized central colour screen. It has three sets of CV and gate outputs (which are either identical or arranged into chords with that mode switched on), and a TRS Type A MIDI output. There’s also, for some reason, a balanced audio out, whose sine wave can’t be edited at all, has no envelope and doesn’t generate chords even when Misha is in that mode. It is fairly useful as a type of test tone for tuning purposes, though, or for generally checking your external oscillator is playing what it’s supposed to. Three additional sets of CV inputs labelled X, Y and Z can be assigned to create various musical gestures, such as slides, and also to trigger the interval keys themselves if desired; which is particularly handy if you want to use Misha with gates from elsewhere in your system.

The screen’s main page presents a ring of notes (your first clue that no one note is more important than any other) alongside indications of the currently active key and scale. Two push encoders are used to navigate around Misha in the first instance, but there’s a lot under the hood here: a reset/undo button below the screen is a welcome addition, while dedicated ‘shift up’ and ‘shift down’ buttons at the bottom of the faceplate cycle between pages to adjust bpm, presets, chords and note range. User buttons 3 and 4 also lend further ‘shift’ functionality.

Press the Record button and punch in a few intervals, and once you’ve reached the end of your tone row the sequence will automatically start playing. More often than not, I should say, this took me by surprise; by which I mean that it started playing sooner than I instinctively thought it would, and by extension that I wanted the sequences to be a little longer. A setting to either limit sequences to a tone row or allow them to extend beyond this would be welcome, but perhaps that’s (ahem) for a future firmware update. In any case, this would be more of an issue were it not for the way Misha can then augment sequences with all manner of clever octave and key transpositions, triplets, playback order changes and individual interval shifts. Don’t be fooled into thinking the work is done once your tone row starts playing back — it’s just the beginning.

...the result is a bona fide tonal powerhouse, as improvisatory and expressive as it is mathematical and cerebral.

The potential length of a sequence also depends on what scale you’re working with, and the amount of scales on offer here is frankly staggering. We’re not just talking major, minor or modal: just in case you needed it repeating, Misha offers 100 unique scales; far more than you could name, from Blues to Raga and beyond. There are also two banks for user‑definable scales on top of this, so there’s no real limit to what you can do tonally. The factory selection even extends to microtonal scales, the most subdivided of which offers 48 intervals within an octave. Add this to the fact that it can also walk chords through any scale’s tone row, and the result is a bona fide tonal powerhouse, as improvisatory and expressive as it is mathematical and cerebral.

Now, as we know, sequencers are commonly used for far more than just melodic patterns. They might just as well be patched to control a filter, to rhythmically control the pulse width of a square wave, to dial noise in and out — the list goes on forever. Misha is undoubtedly designed for melodic patterns, and not much else. You could certainly choose to patch it into something else — and it would certainly perform a function of some sort — but the finely tuned complexity of this module would be completely lost on the result, which would essentially resemble a stepped random voltage. You might see this as a severe limitation, considering how Misha’s price places it in stiff competition with some exceptionally multifunctional sequencers such as Intellijel’s Metropolix, but there’s a satisfying level of purity here as well. I couldn’t escape the fact that not only does Misha do what it does so exceptionally well, it’s essentially the only sequencer of its type in existence. Bravo.