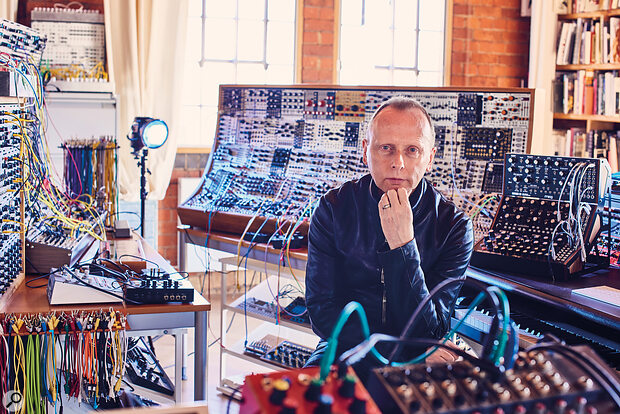 A widely lauded innovator in the world of contemporary electronic and experimental music, British artist Robin Rimbaud, aka Scanner, has been creating music and works of sonic art for the best part of 40 years. Having worked alongside a diverse array of venerable names, from Merce Cunningham to Bryan Ferry to Laurie Anderson, Rimbaud’s work has taken him around the world to venues such as Paris’ Pompidou Centre, London’s Tate Modern and the San Francisco Museum of Modern Art. At the time of writing, Rimbaud’s latest project is a sound pack for Soniccouture’s virtual instrument Geosonics II, combining synthesis with manipulated field recordings. With a new album in the offing, we caught up with Scanner to quiz him on his modular life.

I first saw a Eurorack modular system in 2008. It was something completely new to me, but the aesthetic aspect immediately appealed to me, as well as the sheer look of the instrument. The absence of a screen, this chaotic jumble of cables and the sonic possibilities were all part of this. I was seduced but I never bought any modules until early 2014, and even then it was just a handful of modules from Make Noise, Intellijel, Doepfer... Since then, I’ve built up a substantially bigger system that offers me almost endless possibilities!

On his upcoming album

My second album for UK label DiN, The Homeland Of Electricity, is out in the Summer. It was recorded almost entirely live, direct to ‘tape’ (well, a computer). I like to set up a fluid live system where I can improvise with a 6U case, in addition to the Elektron family of Digitakt, Analog Four and Analog Rytm II, a few effects, 1010music Blackbox and eKalimba, and just play. The results are always unexpected, and far away from anything I might even begin to work on outside of this system.

On his go-to modules

I have several systems, a couple of portable 6U cases for live shows, and two large Eurorack modular systems, kind of like the parents! I’m constantly shifting modules case to case but some constants have been the Make Noise Morphagene, Strymon Magneto, Xaoc Batumi and Zadar, Mannequins Mangrove and Three Sisters, Malekko Voltage Block, Mutable Instruments Plaits, Microbe Modular Equation Composer and the Ochd by Instruo and DivKid. Ask me next week and I might have a completely different answer!

On using phones and police scanners in performance

Using a scanner device within performance was always a way to maintain a live dynamic to any shows. Being able to pull down these indiscriminate signals from the ether and use them within my electronic music shows was a way to introduce the locality into a show, with immediate effect. Standing in a hall you were literally hearing a live conversation taking place between two people within one mile of the venue, in real time. That in itself was something remarkable and I could improvise against this.

There is a very strong sense of community around this scene, and a sense of support and general goodwill continues to this day. Some of my finest friendships have come from meeting and communicating online in forums over the years actually. Exchanging skills and knowledge is always a joy, and from manufacturers to individuals there’s always a conversation to be had. The restless directions such gear can take you in means there’s always something new to discover and share with others, too. Given that we can all learn from one another, it’s like a model for life!

As someone who recently undertook a big system shuffle, I’ll testify that creatively choosing (and changing) the order of your Eurorack modules can have a massive impact on your workflow and ultimately your music. ‘Modular’ need not mean ‘random’. I find it helpful to think of my system more as a set of mini systems. Consider grouping your modules by workflow and not by function: don’t put all your VCOs next to each other, for example, but disperse them around your system, next to different filters and function generators you know they work well with but by no means will be tied into. This also means that (if your case permits) you can easily separate a row from your system to take along to that last‑minute studio session.

Importantly, every now and then change things around. Psychologically, seeing the same neighbours to a module every time you reach for it can lead to ruts in your patching and creativity stagnating. Key to this, in my opinion, is your choice of screws! If we’re honest, the prospect of getting out the Phillips-head can be a genuine deterrent. I happen to like the Knurlies screws from Barcelona’s Befaco, which are screwable by hand or screwdriver. Remember, your screws do not need to be incredibly tight (not least because this can lead to ‘rack rash’ on your modules), and being able to quickly unscrew by hand can make all the difference when it comes to making a quick change. See what a quick bit of housekeeping can open up in your patches! William Stokes