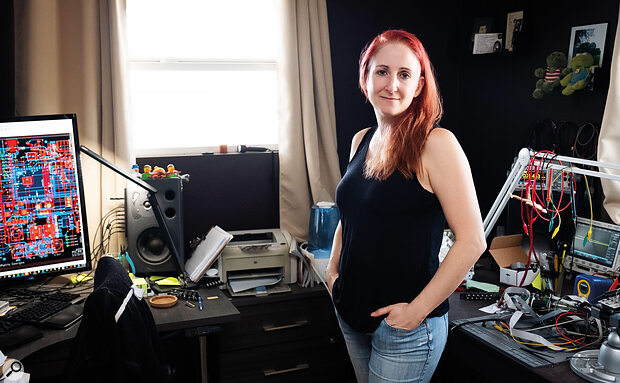 Having earned unanimous acclaim across the modular world with modules like their Basimilus Iteritas Alter drum synthesizer, Los Angeles’ Noise Engineering have in just a few years established themselves as one of the most exciting developers on the modular stage. Husband‑and‑wife co‑founders Stephen McCaul and Kris Kaiser met in a bar over a love of spreadsheets and sound, and have gone on to push sonic boundaries time and again in both software and hardware.

With all the parts shortages, it feels great to get anything out, but [eight channel sequential switch module] Vice Virga was a problem child for years! Melotus is a dark granular beast that we really love, but will likely not be our last foray into granular. Lacrima Versio is our take on auto‑wah, which started as an analogue distortion but was so much better on Versio. Lacrima completely has my heart.

On her study of natural acoustic environments

Frogs use species‑specific calls to find mates, so I spent years in different countries identifying frogs by sound and looking at how the acoustic environment — especially anthropogenic noise — affects them. I also looked at population divergence in red‑eyed tree frogs: sound can inform our understanding of the formation of new species! My background has helped inform what I do here, too, including a product we’re working on and the charity module pairings we do. I miss tromping through swamps, though: there’s nothing like the sound of rain in a tropical forest.

On her go‑to modules (aside from NE modules!)

I adore Winterbloom’s Big Honking Button, but really, their Castor & Pollux oscillator is stunning. It sounds amazing and while normally I am way more interested in how a module sounds than how it looks, the thing is also just beautiful. I love the Bastl Knit Rider, a trigger sequencer that has the immediacy I really want, but also some options to go a bit deeper if I am feeling motivated. And the Xaoc Devices Batumi is one I wish we had thought of!

On being a husband‑wife modular team

We get this question often. I think that people think this is a rare arrangement, but a lot of small businesses are passion projects, and I know several modular synth companies that are family affairs! To be honest, taking NE full time together seemed like an obvious choice to us. I can’t imagine anyone I’d rather spend my days with.

On working in software versus hardware

Software has been a fun switch. My early training was all console/studio based, but when I went into biology music largely fell by the wayside. Fast forward to Noise Engineering and I was able to lose myself in hardware; now I’m finally diving into the software. Most of the team is coming at it from the opposite direction, and it’s really fun to meet in the middle. I think hardware is still my medium, but I like having tools for any user and any need. We hope to keep expanding those options.

When we decided to do NE full time, we knew we could be based anywhere, but we both wanted to stay here in LA because it is such a great synth city.

Things are a bit quiet now, but LA is probably one of the best cities in the world for modular, and I hope it comes back just as strong. When we decided to do NE full time, we knew we could be based anywhere, but we both wanted to stay here in LA because it is such a great synth city. Modular On The Spot started here, but that’s just one of the myriad regular events. We have loads of shops, makers, and artists, either based here or coming through. It’s a real community.

On what inspires her as a developer

I’m inspired by elegant solutions to problems, by my team who strive to make the best product we can make, and by the chance to learn more ways to do that. I learned hardware design on the job, and the fact that I am learning new things every day is a great part of the job!