The Father Of Eurorack By Paul Nagle 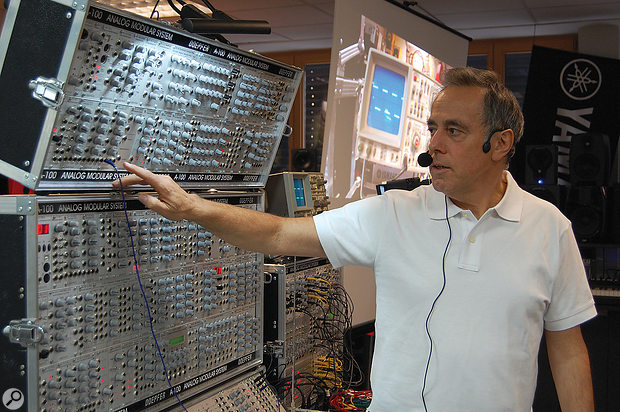 Dieter Doepfer is known as the founding father of Eurorack, the modular format that now dominates all others — but how did it all come about?

“Everything began during my physics studies at the end of the ’70s,” says Doepfer. “I played guitar in a band and I started to repair amplifiers and effect units, going on to design my first guitar effects. When I first saw and heard the modular Moog synth, it was clear that I preferred this instrument. A Moog was far beyond me financially, but luckily the Formant DIY synthesizer project appeared around the same time. Having built that, I later felt some features were missing and began to develop other Formant-compatible modules, eg. a voltage-controlled phaser, a frequency divider, an envelope follower and more. And after that I designed a polyphonic modular system (PMS), aiming for a four-voice polyphonic synth with each module (VCO, VCF, VCA, ADSR, etc) on a single board.

“A few years later, I became the European distributor for Curtis Electromusic and with the availability of CEM chips, synth design became much easier. My next step was the VMS (Voice Modular System), which had a complete synth voice with two VCOs on each board. This marked the first time I was able to make a living from synth design. I also added a sampler module to the VMS and everything could be controlled by a Commodore C64.”

However, in common with many other analogue synth makers, Doepfer then experienced the DX7 Effect. “Unfortunately the requests for analogue synths decreased at that time as the first digital synths appeared on the market. I continued, designing MIDI master keyboards and controllers, but I always kept the analogue synth in mind. When the prices for second-hand TB303s began to inflate, I decided to return to my roots and designed the MS404, a stand-alone MIDI-controlled analogue synth. Thanks to its success, I saw an opportunity to raise the modular synth from the dead.”

Thus the A100 was born and it became the basis of what is now called Eurorack. “In fact,” admits Doepfer, “the first modules were nothing more than circuits taken from the MS404 and converted into individual modules. The rest,” he concludes, “is history.”

Two decades later, the A100 and Eurorack format are going from strength to strength and it’s obvious Doepfer didn’t foresee this level of success. “I assumed it might last five or 10 years but never expected that, after 20 years, sales would still be growing. In the beginning I was in close contact with other Eurorack manufacturers and we had dinner after NAMM or Musikmesse, but these days there are so many new companies it’s impossible to keep an overview of them or every module.”

Despite all this, were he to start over, there is one change Doepfer would make: “I’d use boxed pin headers for the bus connections,” he says. “One of the drawbacks of the A100 was (and still is) that the customer may plug the modules in the wrong way to the bus board. In the beginning it was important for the modules to be as economically priced as possible and so I went with unboxed pin headers, but that’s probably the only thing I would change.”

The Doepfer range is staggeringly comprehensive, with about 125 different modules currently available and a new module designed every two to three months. “There are still many ideas for new modules,” says Dieter. “At the moment our focus is on ‘performance’ modules, ie. those suited to live performance rather than recording situations. I’ve been totally overwhelmed by some of the performances I’ve seen in the last few months using just modular equipment — no computers, no keyboards.”

Asked to name any favourite creations, he says “I do have some, even though they aren’t necessarily our best sellers. Examples are the A107 morphing filter, the A137-1 wave multiplier (notably the harmonics feature) and all the BBD modules (A188-1/2). I was also glad to convince the successor company of Doug Curtis to resurrect the CEM3340, one of the most important circuits ever from my point of view.”

Doepfer finds the future as misty as ever. “When you look at the Eurorack market you’ll find currently more than 800 different modules (I don’t know the exact number) and new ideas have emerged with functions I’d never thought of. During the last few years, whenever someone asked me about the future of the Eurorack, I wrongly assumed the summit had been reached. I’d tend to say the same thing now — but would probably be wrong again.”