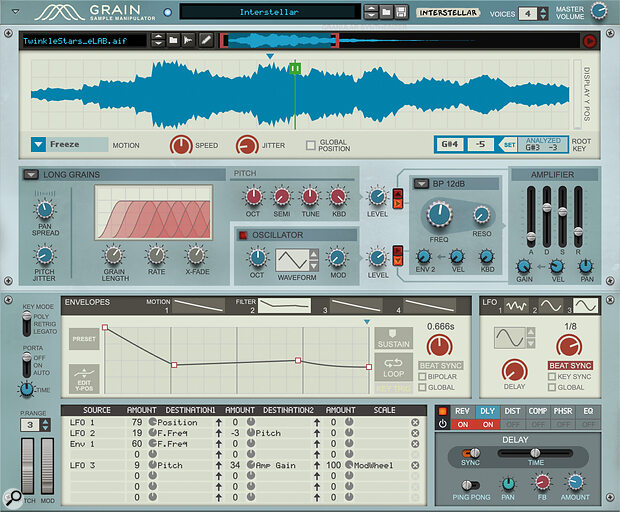 Granular synths come in lots of different shapes and sizes. In plug‑in form there can often be a distinction between true granular‑driven synths (as with Reason Studios’ Grain) and effects processors (like Output’s Portal). These two are sophisticated, complex tools capable of a vast range of effects.

Once the preserve of academic and experimental music, granular synthesis is more accessible than ever and has a lot to offer in all sorts of genres.

Granular synthesis is full of creative potential, and the source of many musically useful sounds unachievable by other means. If you’re working in electronic, dance, experimental, alt rock and cinematic genres and you’re not using it... well, perhaps you could be!

The technique is all about splitting audio into small slices or ‘grains’, often just fractions of a second long, before later reconstituting them in a different way, possibly after they’ve undergone various transformations.

Grains can be derived from an audio sample, or extracted in real time from a track in your DAW or an incoming live audio signal. As such, granular tools often fall into two broad categories: synths, which are playable via MIDI, and processors that are essentially effects for your DAW, guitar pedalboard or Eurorack case.

What can you actually achieve with granular synthesis? It tends towards creating versions of your source material that are nebulous and cloudy, smeared and frozen, or fragmented and glitchy. However the effect can also be intensely rhythmic, pulsing and percussive too.

In this piece we’ll look at some of the practicalities and possibilities with granular, and round up the best tools out there.

Like analogue (and virtual analogue) synths, there can be considerable variation in appearance of granular synthesizers and the terminology they use. In the end though they’re often underpinned by identical concepts. And if you grasp these, you’re well on your way to mastery of the technique, at least in the way it’s typically presented for music production.

I already mentioned that grains can be generated from a sample, or a live input buffer. Some live processors let you freeze the buffer, by the way, which gives you a sort of ‘temporary’ sample to work with.

So one of the first parameters to look for in a granular synth is Position (or a similar term). It sets the point at which grain extraction takes place. For a sample, that’ll be (to begin with at least) a single position within it. For a live input, it’ll be how far back in the sound’s ‘history’ the processor looks. Any granular synth that has a waveform display (eg. most software‑based options, and a few hardware units, like the Tasty Chips GR‑1) will show Position superimposed on the waveform. 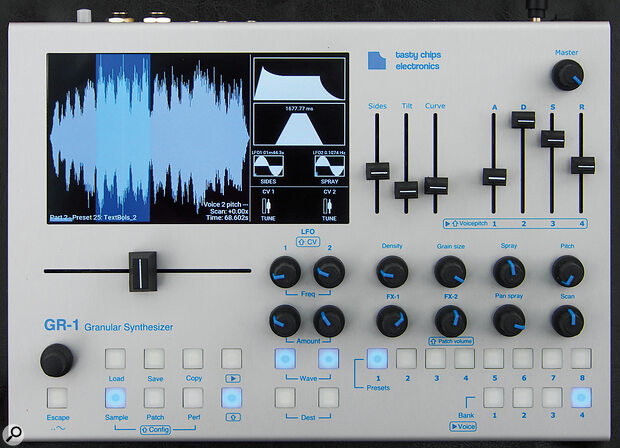 The Tasty Chips GR‑1 is a dedicated desktop granular synth.

Amongst other things, when working with a sample, or a frozen input buffer, a static Position will let you generate sustaining timbres from percussive and discontinuous source material, and ‘explore’ it as if with a time‑based magnifying glass. Your sample becomes a sort of big, complex wavetable, yielding thousands of harmonic starting points: already a fascinating prospect.

It can be more interesting if the grain position moves. A small oscillation around a fixed point adds complexity and movement in the sound and helps avoid sterility or ringing artefacts. A dedicated parameter, variously called Jitter, Spray or similar, can often be found that does exactly this: if it’s not there the same might be achieved with random modulation from an onboard LFO.

What can you actually achieve with granular synthesis? It tends towards creating versions of your source material that are nebulous and cloudy, smeared and frozen, or fragmented and glitchy. However the effect can also be intensely rhythmic, pulsing and percussive too.

However, much larger ‘scans’ of playback position are possible too, that will potentially sweep (or jump discontinuously) through seconds or even minutes of audio. Manual movements are themselves fascinating, and if you’re using a plug‑in you can either do them with your mouse or by attaching a hardware MIDI controller to the parameter. 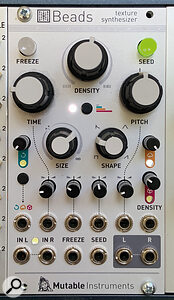 One of the challenges of digging into granular synthesis, as opposed to just firing up presets, is mastering the terminology. On Mutable Instruments’ superb Beads ‘texture synthesizer’ the parameter often called ‘Position’ is instead ‘Time’. Others are more conventional.Otherwise, playback position is often best modulated by envelope generators and LFOs (or both), and some granular tools offer dedicated motion recorders, step sequencers and looping facilities for the job. This opens up possibilities for sounds that have attack portions that are conspicuously time‑stretched, that play backwards as well as forwards, or that pull rhythmic, percussive slices from original material that is sustaining. For MIDI or CV‑driven synths it often makes sense for position scans to be key‑sync’ed, so they trigger for every note you play. However, they needn’t be, which can make for a more fluid...