Q. How can I use MIDI to specify the way in which one note glides to another? 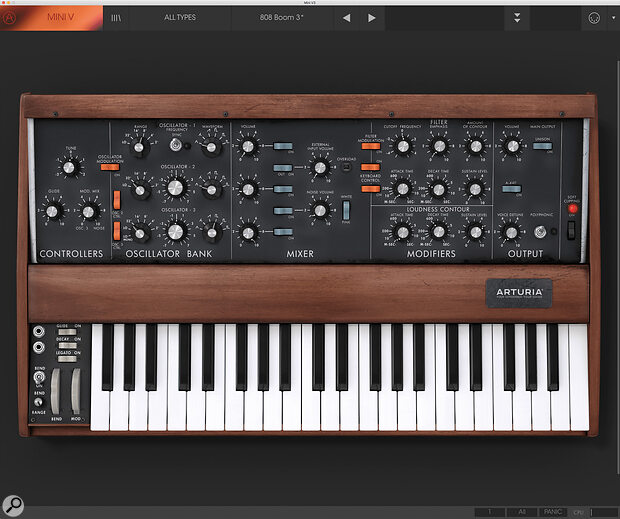 The best way to specify glides between notes is on the instrument itself, rather than the MIDI notes. Note that not all instruments will cater for long glide times — this Arturia soft synth, though, can manage 20 seconds!

I write music using MIDI, primarily, and I am wondering if there is a way to specify, to a DAW such as Pro Tools (which is what I use), how a note will glide to another note and over what duration of time. I mention this because it’s such an easy thing to do if you are writing music notation: I wish for the performer to hold a semibreve note, after which I want the note to rise a perfect fifth over the duration of a minim. Such things don’t seem possible with MIDI, but I’d love to learn otherwise.

SOS Contributor Nick Magnus replies: It will depend on the instrument performing the portamento (glide). If it’s a synthesizer, one approach would simply be to use the pitch bender, which gives you full control over the timing and ballistics of the note bend (assuming the synth’s bend range is set to the appropriate interval). Using a synth’s portamento function is a different matter, as there are no specific MIDI instructions governing portamento range or timing — the answers lie within the instruments themselves.

Virtually every synth’s portamento can be turned on/off using whatever automation methods your DAW provides. So, in your example, set the portamento time (equal to a minim), use track automation to engage it just prior to the moment at which you want to glide, and play the destination perfect fifth note a minim before it needs to arrive on pitch. Don’t forget to disengage the portamento afterwards!

One caveat to note is that not all synths provide sufficiently long glide times: Cherry Audio’s Minimode only allows a maximum glide time of less than a second when playing a perfect fifth, whereas Arturia’s Mini V and SEM V, for example, can offer up to 20 seconds. Choose your synth accordingly!

Samplers are a different kettle of fish, however. Does the instrument in question even have portamento capability? This is not always the case. If you have the full version of Native Instruments Kontakt, and the instrument is ‘unlocked’ for editing, Kontakt provides a preset KSP script that you could add called Unison‑Portamento, and this offers a workaround — apply at your own risk, of course! Secondly, ‘real’ sounds such as sampled orchestral instruments, or anything with a distinct formant (eg. voices), will sound very unnatural as the portamento bends their pitch. The bigger the glide range, the more pronounced it becomes, manifesting as ‘munchkinised’ strings or choirs with tiny vocal tracts and unfeasibly fast vibrato!

Some sampled instruments do offer real, pre‑recorded portamenti/glissandi; however, given the specific nature of your question and not knowing the type of instrument(s) involved, I’d hesitate sending you down that potentially expensive route.

There are many more aspects and potential solutions to this (eg. MPE controllers, such as the Roli Seaboard) but, as I hope you can see, achieving a portamento effect is determined more by the instrument itself than by the MIDI data in the DAW. Of course, if you’re producing a printable score then that will have to be dealt with as a separate entity.