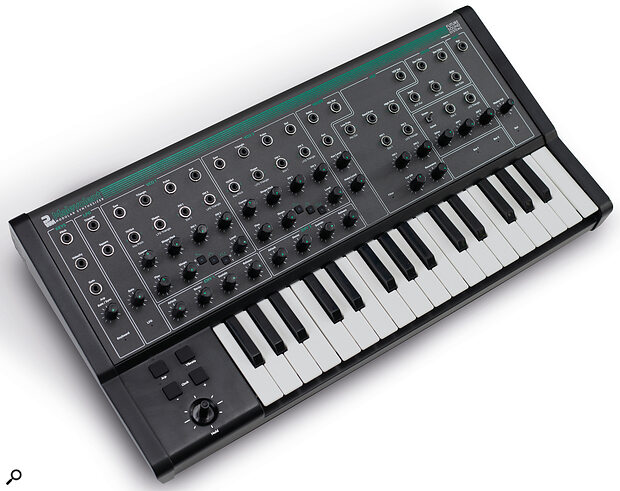 New synth‑makers PWM met the Devil at a crossroads at midnight. This is the result.

“I’m a bringer‑togetherer,” Paul Whittington told our esteemed Editor In Chief Sam Inglis at this year’s Superbooth while exhibiting the Malevolent, the debut instrument from his new company PWM. Whittington was referring, specifically, to his previous work as a product manager at M‑Audio and then at Focusrite Novation, where he worked on an array of hit products including the Keystation, Oxygen, Axiom and Venom controllers, and the MiniNova, Launchpad and Launchkey respectively.

It’s an apt mantle for Whittington’s current work with PWM: “My company is actually called Paul Whittington Group Limited,” he explained. “The idea behind the group is that it’s a collective, where we get all the best people, basically, and bring them together!”

That approach is just what has led to the Malevolent; a dual‑oscillator, semi‑modular analogue synthesizer presenting twin envelopes, multi‑mode filter, 38‑point patch panel and a built‑in keyboard. On top of all this, it offers plentiful capacity for both FM and AM, a drive circuit, noise generator, external audio routing and drone‑latching. Purely analogue yet digitally controlled, it’s a gritty little thing with a big personality that rewards a wide range of approaches; in fact it feels more accurate to say that with this instrument there are no right answers. Like its mastermind, the Malevolent is very much a ‘bringer‑togetherer’.

The Malevolent was co‑created with precocious Bristol‑based developers Future Sound Systems, Whittington having worked with FSS’s Finlay Shakespeare at Novation. The story goes that Future Sound Systems designed the synth’s analogue architecture after initially inspiring Whittington with a bare‑bones single‑oscillator synthesizer kit named the Brunswick. Originally commissioned by the Bristol Experimental Expanded Film collective, the Brunswick featured a multi‑mode VCF, ‘dirty’ VCA, single LFO, simple envelope and a 24‑point patch bay; in other words, its ceiling is the Malevolent’s floor.

In that interview Sam asked if the Malevolent was “almost like a modern take on the Korg MS series?”, to which Paul responded, “it’s like the MS‑20, but as if you’ve taken the brakes off.” I would challenge that comparison with the idea that it’s more comparable to something like the Moog Grandmother: be this in its layout, workflow and, perhaps most of all, its patchability with external gear. While the Korg MS‑20’s oscillators operate with Hz/V scaling, the Malevolent works at the more common 1 Volt per octave. The MS‑20 also kept its patch panel and control panels very much separate, while the Malevolent, like the Grandmother, integrates its patch points into the main panel layout. I mention this because the Malevolent feels like a very modern synthesizer in a way that the MS‑20 and MS‑20 Mini do not: it appears to be designed with small studios in mind, combining analogue signal flows with the ease of digital control and with USB C for MIDI — with the capacity for bus‑power, impressively — and with an outward‑facing attitude to existing setups. Like both the Grandmother and the MS‑20, the Malevolent has no screen and no presets; something, as someone with a general aversion to menu‑diving, I find myself refreshed by.

The idea of ‘taking the brakes off’ is apt, though. Or at least, the idea of taking most of the brakes off. On the MS‑20, certain quirks in the signal flow could be utilised musically, for example patching its output back into its external signal processor to achieve distortion. The Malevolent, by contrast, is begging for rebellious patching straight out of the box — indicated at the very least by its name. From its dedicated drive circuit to twin FM inputs for each oscillator; far from leaving its idiosyncrasies to be uncovered, it presents them on a platter, daring you to push the instrument as far as it can go. The only question is, how far can it go?

Round the back we find a USB C port, MIDI in and out, 3.5mm clock in and out sockets plus quarter‑inch headphone and line outputs.

From left to right, the front panel presents a Keys section with arpeggiator rate control, a simple LFO, two identical oscillator sections, two envelopes, a mixer section with noise generator and auxiliary audio input, a filter section, envelope section, VCA and drive section (here identified as AM), and finally the main output. The panel’s workflow will feel familiar if you’ve got any experience with conventional monosynth layouts. Beneath this is a mini‑keyboard with modulation joystick, vibrato and arpeggiator controls and octave‑shift buttons. The build quality here is nice. The knobs feel smooth and solid, and there’s a nice weight to the instrument overall.

When it comes to visual design, no matter how familiar one is with an interface, certain things can cause a double‑take. In this case, it’s the fact that envelope 1 is directly beneath VCO 1 and envelope 2...