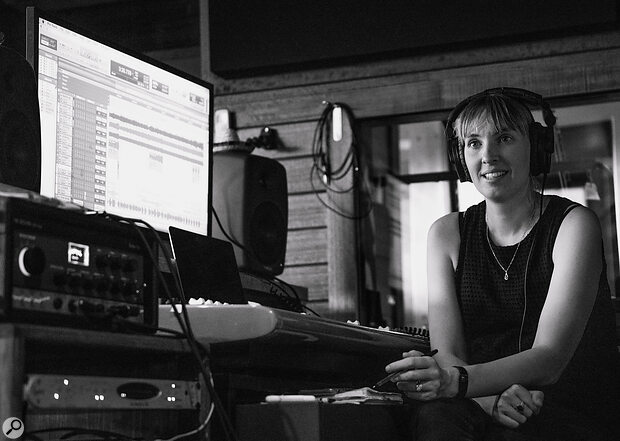 Having cut her teeth at London’s Miloco Studios with producers like Paul Epworth and Ben Hillier, Anna Laverty now lives and works in Melbourne. Her decade in the vibrant Australian city has seen Laverty’s name grace the record sleeves of artists like Nick Cave and the Bad Seeds, Courtney Barnett and Cut Copy, and she has established herself as a prolific studio all‑rounder with several producer and co‑writer credits. Through this practice she has become, as she modestly puts it, “pretty adept at jumping between creative and technical roles”.

Jason Isbell. He’s an alt‑country guy from America. Jason Isbell and the 400 Unit is the name of his band. He played with Ryan Adams for many years, as his support and things. Also Nadia Reid, a folky indie songwriter from New Zealand; I’ve been really digging her record.

Probably a band from here in Australia called the Peep Tempel. What I’m most proud of is that they keep asking me to make their next record. It’s post‑punk, it’s a very Melbourne sound — well, it is the Melbourne sound, really. It’s really exciting. It’s always been jangly guitars, real guitar music. It’s real, because people have something different and interesting to say. It’s not set up. It’s not fake, it’s not contrived. The first album I did with them I was the assistant, and sort of halfway through the session I became the engineer, and on the second album I was the engineer but ended up producing it, and then the third record I just did it all! So, their career progressed with my career, and they ended up doing amazingly well.

I worked on a Nick Cave record a few years ago [Push The Sky Away] when they were back in Melbourne, it was such a beautiful record, such a pleasure to work on. Everyone here is so proud of Nick Cave and his musical career. He’s truly Melbourne, born and raised. His mum still lives here. There’s also a lot of feminist rock here which is amazing. A band called Amyl and the Sniffers — good name, isn’t it! They’re really heavy punk, with a frontwoman who’s just this amazing, goddess woman.

The mic cupboard. I think it makes such a difference. Converters and stuff are so good these days that no matter what you’re plugging it into it’s going to sound OK, but if it’s a really shitty microphone, and if it isn’t capable of picking up the tone of the source, then you don’t have it. You haven’t captured it. So, that to me is the most important thing. And that’s why, since I’ve been doing this, I’ve been trying to buy some microphones, so that no matter where I am — for example, I made a record in an abandoned desert ghost town in Western Australia, running off a generator, and I just had my case of five really good mics. And it sounded great!

I’ve got three, I would say: Paul Epworth, Ben Hillier and an Australian producer called Steven Schram who, when I moved back to Australia, was the only one who asked me to come and work with him on sessions. He was the one who told me he was going to stop employing me because I had to go on and find my own work. He was like, “You’re more qualified than anyone working in this city. Why are you engineering for me?”

What I learned from Paul [Epworth] was how to have fun with sound. I knew all the rules, like don’t turn phantom power on with ribbon microphones and all that stuff that you have to know, but I learned not to rush through things and instead take the time to experiment with sounds, have fun with it and try really crazy, wacky things. You could spend four hours on tying a string around piano strings and seeing what sound it makes. And you’ll never use it, but that’s not wasted time because you were trying to do something interesting and unique. Paul cared for everyone in the room, always. In a “Do you need me to explain something to you?” kind of way. Which is great. I’ve worked with plenty of producers where it’s like “Hurry up, get it done. I don’t want to talk to you, I don’t want to be your friend. I’m paying you six pounds an hour. Do the work.”

That whole ‘crazy genius’ myth. It’s such bullshit. I’ve seen it used in really dysfunctional ways before, I’ve seen people taken advantage of before. People hide behind this kind of ‘I’m some kind of mad crazy genius’ moniker, and it’s such bullshit. It’s like, some of us are good at playing guitar, some of us are good at writing lyrics, and some of us are good at putting microphones in front of snares. That doesn’t make you some kind of mad genius, it just means that’s what you’ve been doing for the last 25 years. I think, historically, a lot of producers managed to get away with portraying that, and a lot of people wrote about it in that way. Like, “They’re just some kind of genius, because everything they touch is magic!” And, honestly, if I was working with the Beatles, it would sound really great too! Because it’s the Beatles! It’s outdated and quite a dangerous myth, really. My theory has always been: if you’re getting paid a lot of money by someone to make their record, you don’t treat them like shit.

There’s a real cliché that gets spoken about often, which is that 50 percent of being a music producer is being a psychologist. And there is a reason why that gets said so much. The singer and the guitarist are going to butt heads; but at the end of the day they’re real people with real feelings and real stresses and real history with each other, and there are reasons why they might be falling out, and you can’t make light of that. You have to work out how you’re going to get around that to get the best out of the song. Because at the end of the day you’re being employed to get the best out of the music. People aren’t going to perform their best in any sense of the word if they’re uncomfortable, or don’t want to be there or whatever.

My personality is that I’m OK with being the assistant. I’m quite happy to slot into whichever role needs to be filled in the studio, and that trait doesn’t leave you when you stop being an assistant. Even when you’re a producer, you have to slot into the dynamic of a band. You need to walk into a rehearsal room to do pre‑production and assess the dynamic of that band, and how you’re going to manage the personalities, the egos, the existing relationships between the members of the band. Being adaptable is one of the most important traits you can have if you’re trying to slot into a pre‑existing music situation.

It’s an album: [Paul Simon’s] Graceland. I know how it sounds so well. I can put it on any system and I know what the room is doing and what the speakers are doing, and all that kind of stuff. It just has such a diverse range of sounds — within the first 30 seconds of the first song. You get a really great scope of what’s going on dynamically. It’s quite controversial, though, when you say that. Some people are like, “Argh, that’s so uncool! That’s such a cliché!” But it’s such a dynamic, beautiful mix! It’s such a good‑sounding record.

I went into an audio shop once because I needed a pair of monitors, so I went in and asked if they had the new Genelecs. When I put Graceland on, the guys in the shop were like, “What the hell is this!? It’s amazing! We’re going to use this as our thing to sell speakers from now on!” They’d never heard it before.

I’m going to say something I’ve never said before, because I’ve just got a pair: the Schoeps CMC6, and the capsule is called an MK4. It might sound really weird, but they sound like my ears! That’s probably not the sales pitch they’d go with, but for me as an engineer I can trust them. If I’m listening to an acoustic guitar, I’ll put my ear where the microphone is and listen to it, and then I’ll go and sit down and it will sound like what I heard. And that’s what I want.

I’ve worked with some of my heroes, so I’ve been really happy with that. I’m just going to say Sylvia Massy. I think we could do some cool, fun stuff together. She was literally the only woman that I ever heard about when I was younger. I hadn’t heard of Sylvia Robinson or anyone like that, so I guess I always held a little bit of a flame for her. And I’m so happy that now she’s being recognised for all the shit she did at the peak of her career, that no-one really seemed to realise. Very, very pioneering. I’ve got her cool book, Recording Unhinged.

I would like to have told myself… hmm. I don’t know! It’s hard to say, because a lot of the decisions I ended up making worked. I’ve always been such a huge risk‑taker, and if there was ever the tiniest inkling of an opportunity, I took it. It’s not like I can say to myself, like “You really should have done that thing,” because I did it. I totally did it. So I’ll just say: don’t leave drug‑affected artists alone in the studio. With other people’s equipment.