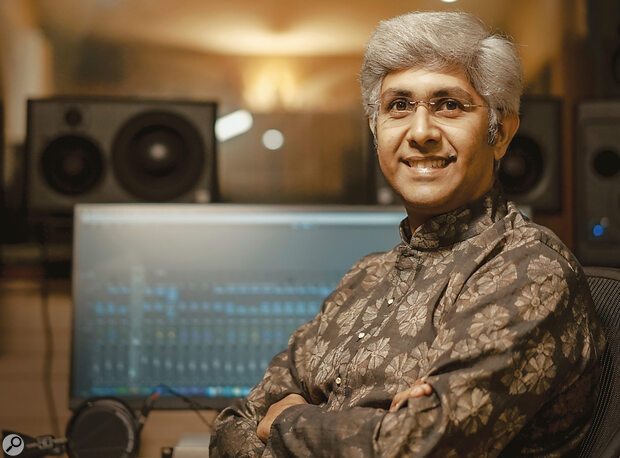 Learning to capture Indian music in all its rich variety has been a life’s work for Sai Shravanam.

“Lack of satisfaction has been my teacher,” says Sai Shravanam. “I don’t go by the rules. I just go by: if it sounds right, I record that!” India’s leading engineer specialising in classical and folk music could be described as a perfectionist, but not a purist. He puts vast amounts of work into his goal of capturing the sound of instruments as he hears it. Sometimes this means upgrading equipment — a constant struggle in a country where many brands have no distribution — but more often it involves adapting the recording environment, and using relatively humble gear in imaginative ways.

“It was my dream to be one of the world’s best tabla players. I wanted to be a musician, and in parallel, I developed an interest in harmony and arrangement, and was a composer for my school band. I was never satisfied with wherever I used to go, so I started recording my own music. When I recorded, that’s when I realised the limitations of technology.”

Initially self‑taught on the tabla, Sai achieved his first goal while still a teenager. It was the start of a journey which would eventually see him build his own studio.

“All the top artists in India — very, very famous classical singers and instrumentalists — used to ask me to come and accompany them on the tabla. I was travelling around the world, right from the age of 13 and 14, playing professional concerts for them. Very often, I was going into recording studios. That is where my search began.

“After playing my tabla tracks, I used to come back to the console and listen, I was never satisfied with the way it would sound. That kind of seeking for my tabla sound led me to: why can’t I start recording myself? Why am I so disappointed with recordings that I am hearing, that people do in professional studios? This was when I was 15 or 16.”

Aspiring engineers are often advised to start out with a very basic system, and learn to get the sound they want through mic placement and good arrangement. That advice isn’t often acted on, but Sai Shravanam had no choice. “My father first bought me a Pentium One computer. It had a 4GB hard disk, and it had 512MB RAM. And I still remember, when the first computer came home, we did an Indian ritual to it, praying to it like a temple. We had it in our house, and I used to record on free software.

“I used to record the tabla, and the first mic I had was a gooseneck microphone made by Creative. Creative used to make soundcards, and there used to be a Creative mic. Buying that microphone was very difficult for my family, it was a very big investment for them. So I used to record on that, and it used to sound so horrible, but I could capture my tabla. I used to do so much EQ for it to sound natural, and the EQ would be so weird.

“Many years later, I was given an SM57 as a gift, by one of my well‑wishers. When I used to record tabla, the tabla used to be on the floor, and the mic used to be grounded to the floor, as I didn’t have a mic stand at that point. Every time my left hand, the bass, would play, I would hear thuds. So I used to stack up three pillows, and then keep the SM57 hanging out, and then record the tabla. That’s how I learned sound. I did not go to school for sound, I did not have anybody teaching me sound.

“When I started my own studio, when I really learnt the art of recording and making my own music, I used to hire fantastic musicians in India to come and sing some of my compositions. I made a very big hit album in India called The Confluence Of Elements, sung by Bombay Jayashri, who was later the singer for the Academy Award-winning Life Of Pi’s ‘Lullaby’. That album was produced in 2006, and it was well ahead of its time. So, people were, like, ‘What kind of sound is this? What is this guy doing there?’

“And all the musicians started having a lot of trust in my work. They left all these big, huge studios in Chennai, and they used to come to my little studio in my house, which was about 200 square feet. And from 2007 onwards I was so busy that I never had a Sunday and, until the Covid pandemic, I worked almost every day recording and producing albums for Indian musicians. That’s how, from my wish to being a musician, I’ve ended up being a music producer and recording engineer.”

“I never had a reference book, or any mixing guide....