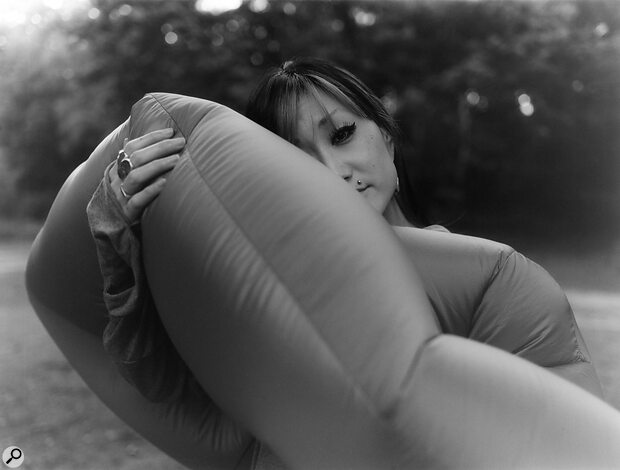 Japanese producer and artist Hinako Omori can often be found lending her synth and keys expertise to the live shows of the likes of Radiohead’s Ed O’Brien, electro‑pop sorceress Georgia and spoken‑word artist Kae Tempest. Her own music weaves synths and samples into enveloping ambient soundscapes that often incorporate field recordings made on her travels using a portable recorder. Her first full‑length solo effort a journey… is set to be released in March 2022 via the Houndstooth label, and incorporates recordings of the natural area surrounding Real World Studios in the west of England, originally taken as part of WOMAD festival’s lockdown series.

Hinako has lately been developing scores for animation, as well as working on music for Belgian‑American artist Cécile B Evans’ installation at Centre Pompidou. She also hosts a monthly show on Worldwide FM with close collaborator Kloxii, through which, as Hinako explains, “We explore the topic of identity and heritage through music that helped us reconnect to our roots.”

Taeko Onuki’s album, Signifie. I’m really embarrassed to say I didn’t know about Taeko san’s [‘san’ is a title of respect in Japanese] music until I came across this record in a record shop in Shimokitazawa a few years ago. It was one of those moments where I picked up the record, saw the incredible artwork and immediately needed to listen to it! I handed it straight to the gentleman behind the counter who put it on for me, and I instantly fell in love as soon as I heard it. Such a beautiful, warm atmosphere and sound, with Taeko san’s ethereal voice soaring over the lush instrumentation… Many of the tracks on the album are arranged by Ryuichi Sakamoto also; they were frequent collaborators. I later realised that Taeko san was a huge key figure in Japan’s City Pop scene in the 1970s.

I think it would be the project I worked on last year, which has become the first solo album project of my own. During lockdown last year, my wonderful friend Oli [Jacobs], the head engineer at Real World Studios, kindly invited me to take part in a series of sessions for the WOMAD festival, called WOMAD At Home. The premise was to invite nine artists to create an immersive audio experience that reaches beyond the possibilities of traditional stereo listening. I felt incredibly honoured to be amongst a line‑up including Sarathy Korwar, Native Dancer, Voka Gentle, Blue Lab Beats and Cheng Yu. At first I was planning to do an ambient improvisation, but then thought it could be a nice idea to piece together the demos I’d started creating throughout lockdown into one continuous piece. Somehow quite magically they all naturally seemed to fit together side by side!

I’ve always been very excited at the thought of working with binaural audio, and I was lucky enough to be able to travel down to Real World Studios a day before my session to borrow a binaural dummy head, drive out to the surrounding woodlands and lakes and record field recordings from the area for the project. The idea with the recordings was to create a sonic environment that could teleport you out of your current location, especially during this time of lockdown, to somewhere that you can be surrounded by nature. I was thinking about the art of forest bathing, ‘shinrin‑yoku’, and how this can have such a positive effect on our mental health and wellbeing.

We also reamped some of the vocal stems using a D&B Audiotechnik loudspeaker array system. Being able to pan audio in a 360‑degree space was extremely fun, especially in the stunning acoustics of the Wood Room at Real World.

I hope this doesn’t sound too cliché, but I think the vibe and atmosphere of a studio is so important! Making music can be such a vulnerable process, so a safe space where you can fully immerse yourself is ideal. Somewhere you can feel completely comfortable and lose yourself for a while. Of course, a lovely collection of synths never goes amiss either…

My ‘A’ level music technology teacher at Reigate College, Lloyd Russell. While we were studying Lloyd was in an electro‑pop band called Schmoof, playing [Roland] SH‑101 keytars. It was amazing and eye‑opening to hear the ins and outs of the music industry from someone who was directly involved in it. I’m so grateful to Lloyd for all the encouragement and advice, inspiring me to continue working in music and for the help he offered us post‑college, too. He even very kindly let me borrow his SH‑101 long‑term, as he was very keen for me to further my understanding of synthesis.

That’s a tricky question! I think it depends on the type of music I’m working on. I might delve into a playlist I’d created of favourite tracks around a theme — the thing I’m really interested in is the creation of space, environments and immersive elements in music, and how artists and producers create their own sonic architectures. My favourite records on this theme at the moment are by Pauline Anna Strom, Eliane Radigue, Gia Margaret, Tim Hecker and Emily A Sprague. And of course Oneohtrix Point Never, Daniel Lopatin, for cinematic soundscapes.

Hinako Omori: Making music can be such a vulnerable process, so a safe space where you can fully immerse yourself is ideal.

I’d love to take an original Theremin, the RCA, by Leon Theremin. I’ve been delving into the beautiful performances by Clara Rockmore, which always brings tears to my eyes. The expression, emotion and tone of Clara’s playing speaks a thousand words, especially her performance of Tchaikovsky’s ‘Valse Sentimentale’. It would be amazing to spend time on the desert island with no distractions, really diving into the instrument and learning how to play it. It would take me a very long time I’m sure, but I’m willing to dedicate the time to it!

I was going to say the original Moog Modular — watching videos of the incredible Wendy Carlos and her Moog synthesizer creating an orchestra of tones has been such a huge inspiration for me — although I think our dreams were answered a few years ago when Moog produced a limited run of the IIIc… so, instead I’m going to go with the Ekdahl Polygamist by Knas. It’s this amazing, incredibly colourful semi‑modular analogue synthesizer I discovered for the first time recently, which looks and sounds like an out‑of‑this‑world board game. It’s controlled using a pressure‑sensitive ribbon controller. I believe there were only 55 units ever made.

Karin and Olof Dreijer. The Knife were the first band that really inspired me to delve into synthesis from listening to their intriguing synth worlds, rhythms and soundscapes… everything about their creations is just magic. I became fixated by the sound that they created in ‘Like A Pen’, which always makes me envisage a dripping tap, and found it so fascinating that they’d built a beat for the whole track around this sound. It would also be an absolute dream to work with Susanne Sundfør — I’ve been listening to her record Ten Love Songs on repeat.

Enjoy every moment of the journey and try not to worry about the smallest details. I think if you go into something open‑hearted and open‑minded, you’ll eventually end up where you imagined. Or perhaps the path will lead towards something you’d never thought of, but that’s equally exciting. I’m forever grateful for the wonderful and inspiring friends and collaborators I’ve met along the way, and the experiences I’ve been lucky enough to have with them.