100 Years Of The Theremin | Podcast

Still Making Waves In The 21st Century By Caro C

Win Yourself A Theremini

To celebrate the 100th anniversary of the invention of the Theremin, Moog have kindly donated a Theremini instrument along with three runner-up prizes of the Patch & Tweak With Moog book. 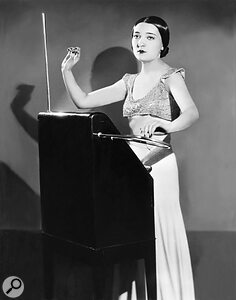 Clara (Reisenberg) Rockmore holds a unique place in music history as the star performer of the theremin. Born in Russia, in 1911, at four, she was accepted as the youngest ever violin student at the St. Petersburg Imperial Conservatory. As conditions deteriorated after the Revolution, the Reisenberg family left Russia and travelled across Europe for several years until 1921 when they succeeded in gaining passage on a steamship bound for America. In New York, Clara resumed her studies with Leopold Auer, but shortly before she was to make her American debut (playing the Beethoven Concerto), she developed an arthritic problem with her bow arm, and had to give up the violin.

Fortunately, she had met Leon Theremin (an Americanisation of Lev Termen, as he was known in Russia), the inventor of the world’s first electronic instrument. “I was fascinated by the aesthetic part of it, the visual beauty, the idea of playing in the air,” Clara recalled, “and I loved the sound. I tried it, and apparently showed some kind of immediate ability to manipulate it. Soon Lev Sergeyevich gave me, for a present, the RCA model theremin.”

She convinced Leon Theremin to build her a far more precise and responsive instrument than the RCA model, one with a five-octave range, instead of three. Over the years she performed extensively but it was not until 1977 that she saw the release of her first commercial LP, performances with Nadia Reisenberg (recorded by Robert Moog) titled ‘The Art Of The Theremin’.

In 1989, Steve M. Martin, long fascinated by the instrument, embarked upon the documentary Theremin - An Electronic Odyssey, a film including some of Clara’s last public performances (videotaped at the dress rehearsal for the Nadia Reisenberg Remembrance concert in late September 1989), and the New York reunion of Clara and Leon Theremin (then aged 95) in 1991. The film premiered in 1993 at Alice Tully Hall, New York and in large measure helped revitalised interest in both the theremin itself and Clara Rockmore’s unique accomplishments. Leon died in 1993 and she died in 1998.

Cyril Lance is the Chief Technical Officer at Moog Music and lead designer of the Moog Claravox Centennial Theremin. Cyril first met Bob Moog in January 2005 during an informal visit to the Moog factory. When Bob was diagnosed with cancer in April of 2005, Cyril was asked to take over the engineering effort. Since then, Cyril has been at the helm of engineering and product development and, along with the dedicated and passionate team at Moog Music, has helped to continue Moog’s legacy of designing and producing beautifully crafted electronic instruments aimed at inspiring artists world-wide to explore and expand their personal sonic vocabularies.
www.moogmusic.com/products/claravox-centennial

Dorit Chrysler has been dubbed a superior wizard of the theremin. An Austrian-born, New York-based composer and performer, Chrysler is the co-founder of the NY Theremin Society and has started the first international school for Theremin, KidCoolThereminSchool and L’Ecole Theremine with branches in NY and Paris. As much as the Theremin is a tool in Chrysler’s electronic instrument arsenal, she is also one of the most visible Thereminists spreading the gospel of this mysterious sounding instrument. Most recently she finished her analogue soundtrack for a remake of M by Fritz Lang and was featured on the soundtrack of the HBO documentary Going Clear.

NY Theremin Society - Chrysler is promoting the application of theremin in different art disciplines and has produced the THEREMIN100 compilation release, commemorating the 100th birthday of the Theremin in 2020.
www.doritchrysler.com/video.html
nythereminsociety.bandcamp.com/album/theremin-100

In 1969 Bruce Woolley bought a Futurama electric guitar, formed a school band, and dreamed of being a professional musician. After years of experimentation, and unsuccessful attempts at becoming a famous jazz-rock guitarist, he decided to concentrate on writing pop songs. In 1979 he co-wrote 'Video Killed The Radio Star' for The Buggles.  After a stint fronting cult new wave unit The Camera Club, Woolley moved back into songwriting and production, forming a creative partnership with Grace Jones.

Katia Isakoff is a composer and multi-instrumentalist music producer whose compositions, performances and productions first appeared in the Add N To (X) album Loud Like Nature (Mute Records). She has since collaborated on numerous albums and projects including John Foxx and Steve D’Agostino’s Evidence Of Time Travel which was composed and produced at her London studio. Having contributed synths and co-mixed EOTT, she went on to join them for a live concert performance at Electric City Conference, Dusseldorf, adding Moog Theremini and synths to the sonic architecture of this ever-evolving and expansive Karborn graphic novel, which premiered with a live performance at the British Film Institute UK and Sonic Acts Festival, Amsterdam. Katia has since spent much of her time between London and Berlin working on her forthcoming album She’s Not Here.
www.katiaisakoff.com

Caro CPhoto: Shirlaine ForrestCaro C is an artist, engineer and teacher specialising in electronic music. She started making music thanks to being laid up whilst living in a double-decker bus and listening to Warp Records in the late 1990s. This "sonic enchantress" (BBC Radio 3) has now played in most of the cultural hotspots of her current hometown of Manchester, UK. Caro is also the instigator and project manager of electronic music charity Delia Derbyshire Day.