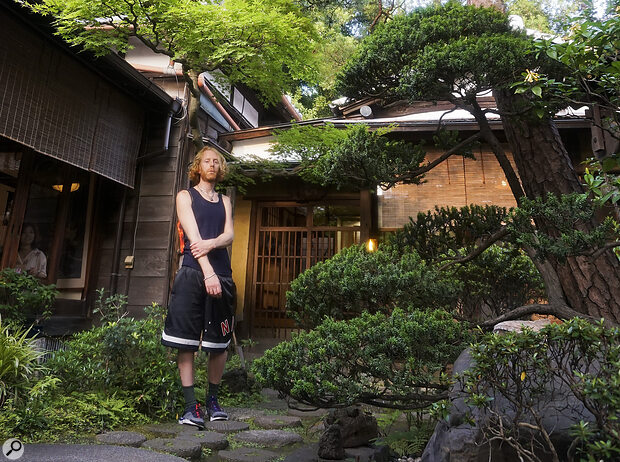 A renowned producer straddling the worlds of hip‑hop and alternative music, Nick Hook speaks to me from thespacepit, his studio in Brooklyn, New York, where he is surrounded by a paradisal array of vintage hardware. His EMT 250 reverb allegedly once belonged to Toto’s Jeff Porcaro, while his Roland TR‑808 was modded and signed by Bruce Forat himself. Having cut his teeth playing in bands, Hook’s career has seen him collaborate with Run The Jewels, Young Thug, Hudson Mohawke and NWA’s Arabian Prince, to name but a few. His recent work also includes several collaborations with veteran British producer Gareth Jones, not least on the remarkable album Drums, made exclusively with the sounds of a mouthwatering selection of drum machines.

Co‑owner of the Calm + Collect label, Hook’s approach remains grounded and excitable in equal measure. “The only thing that matters is that you care,” he explains. “You know those little new speakers Teenage Engineering have made? Well, I’ve just asked for 50 of them!”

All my artists on Calm + Collect! Quazzy, Geraldina, Electrogenetic, Camo UFOs… I’ve also been listening to Run The Jewels, but I just can’t stop listening to Calm + Collect because it’s all from within here. The beauty of what we’ve been forming is that we listen to each other. As a 50‑percent owner of the label I can cultivate records where my name is nowhere to be found on it, but it’s still my sound, it’s my art. I think being seen but also being unseen is such a treasure.

I’d say the project I’m most proud of right now is the crystallisation of thespacepit, my studio here in Brooklyn. We have all these different environments and recording spaces here. We even have a reading room! I’m so proud that my story has led to people coming here to work. Historically the studio has primarily been just for me, to facilitate my projects. I’ve been spending a lot of time in Mexico — just me and a silver crate with an [Elektron] Octatrack, an iPad, a [Teenage Engineering] OP‑1 and an OP‑Z. When I went to Mexico I realised that the studio needs to be an open door. Like, I want everyone to have the passwords to our bank accounts. I like to redistribute everything I have!

The first thing for me is just to walk in and see the angles of the studio, see who my team is. If I’m working in a studio somewhere else, I want to find out who their engineer is, because they know the whole studio. I like to go and ask what’s up to all the runners and interns, I like to visualise what could stop me from being creative before it stops me, and trust the fact that I’ve done this before. I like to talk, either as group or to individuals, and say “Yo, I am the producer but this is about the artist today. Anything we’re talking about is in the name of the art, not in the name of me.” Like, when we did ‘212’ with Azealia [Banks]. I would only record alone with her because she knew she could confide in me, so my other job was to clear out the room. “Hey guys, I know you work here but I’m gonna need the room private because we’re going into a moment…”

Nick Hook: If there was ever a message from one of my mentors it’s Killer Mike telling me, ‘Stay high, bitch!’

I have a chain of mentors! When I was 14, my best friend was 30: Mike Metroulas from a band called Nerve in St. Louis. I’d just started playing in bands and was introduced to him by a friend. He recorded my first band in a basement when I was 14. A demo. Then he let us open for them as sophomores in high school. They were a hard rock, Deftones kind of band. I went everywhere with them, carried their amps! He taught me things like… one of the first things he said to me when I was 14 was “I never look at anyone when they record,” and since then I’ve never looked at anyone when they’ve been recording. It was an education to see grown men operating, doing business. They took me everywhere. You start to understand that there’s certain language you don’t hear unless someone lets you hear it. This is a wild industry, dog!

That led me to Gareth [Jones], who mixed my major‑label band Men Women & Children’s album. Gareth was the one who knew how to MIDI up the studio before everybody. The important thing to note with Gareth is that from 2004 to 2014 there was never any talk about creating original music together. That came later, going from drone and experimentals… we accidentally wrote beautiful, strong music. Around the same time a man called El‑P stepped into my life. I played with El live at first: we’d do Pitchfork Festival, and we did the El‑P Megamix instrumental set [‘Weareallgoingtoburninhellmegamixxx3’] for Low End Theory. That was the first time we met Flying Lotus, Gaslamp [Killer], Ras G… I’ve seen El at his rock bottom when he wanted to quit music. One time El invited me to go eat chicken on his roof with Killer Mike, and if there was ever a message from one of my mentors it’s Killer Mike telling me, “Stay high, bitch!” Yeah!

I think the biggest misconception is about what the word ‘producer’ really means. You’ve got a guy like Rick Rubin who lays on the couch and doesn’t put his hands on the gear, but he’s very present and he has a lot of trust. You hear stories about how he’ll go and turn up every channel on the board and walk out. But since he’s built that trust, you’re probably going to look and say “He was right!” That’s his production game. Then you’ve got a producer like Dr. Dre, who does touch the machines. Who, in my opinion, is also coaching vocal takes and doing all those things that make records records. Then you’ve got the guy who just makes beats, who doesn’t tell anyone to do anything, who doesn’t even know that the intern can fill up the water for him! In fact, maybe there is no misconception. Because the perception is the reality. For example, it’s important to acknowledge someone as a co‑producer who maybe hasn’t seen themselves as that. If you just stood in the middle of the room and said “Make it like this! Like that! Change that!” and I went and made it, of course you’re the producer! You produced an idea! My job is to either relinquish and say “I’ll just do what you say,” and that’s my production role for that day, or I can say, “Why don’t we try it like this, because I know how it works and I have a thesis.”

Gareth taught me there should be no judgement. If someone says they want to try something and I say “Well, that will just sound like this…” then I’ve already judged the idea. How could I know? If I colour an idea before you’ve tried it, the next time you might not ask me to try it. For me, my job is just to help someone finish. I can lay on the couch the whole time and tell you how to work everything… But also I can sit and engineer. If I want I could just call the session and say “Let’s just take a walk until we’re ready to record.”

The one thing? Octatrack, Mk2, full of samples. I can comfortably create on a high level and leave all the shit that I’ve collected in my studio for my boys. You don’t think my whole studio’s sampled into that Octatrack anyway? Although it would need to be plugged in… so, also my phone. Don’t forget, your phone is every instrument, every book, every song ever made. So, I’m good. Gareth always says: it wasn’t the paintbrush Picasso used, it was the painting. A piece of gear shouldn’t dictate what you do. That’s a big misconception about production, if you want to loop back to that other question. It’s you: the way you carry yourself, the way that you see. How many studios have we all been to with a lot of cool shit that doesn’t work anyway?

Can I modify? Maybe a Mk3 Octatrack with, like, USB Ableton Link, Bluetooth MIDI, CV outs…? Or does it have to be something that’s long lost and forgotten? Actually, I wouldn’t bring anything back. I don’t believe in reissues.

For me, it would be a room with people like Mario Caldato from the Beastie Boys. The way that the 808 was crossed with the samples and the percussion — with [Eric] Bobo from Cypress Hill, that was an open door. I heard stories that they used to walk across the board and jump up and down! David Byrne and Brian Eno would also be there, as My Life In The Bush Of Ghosts. Dre would show up, Metro Boomin would pull up, it would just be a room of people who aren’t afraid to cross boundaries. You know, like when Herbie took the [Oberheim] DMX and crossed it with the Wurli. Bootsy [Collins] would show up, Bernie Worrell would be there, and hopefully [Nick] Hook would be the middle point because he is an amalgamation of all those!

I think great records take a lot of people. Like, if you don’t have a female involved on all your albums, start trying to get one. Learn to create with someone who speaks a different language. Those are the kinds of people who influenced me to have that ethos. This is what I’m about.