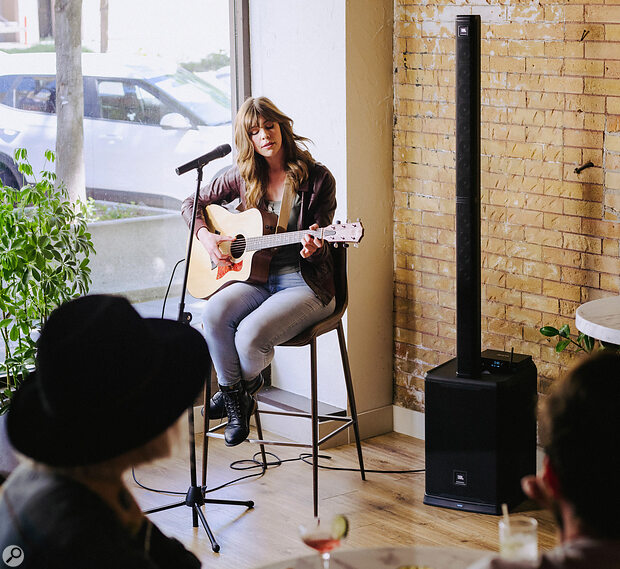 I am a big fan of mini line‑array speakers for smaller venues, as they invariably sound cleaner than similarly priced ‘box’ speakers, especially in the vocal range, they spread the sound more evenly and they have good resistance to acoustic feedback. And at the end of the gig they are easier to pack up and throw in the back of the car. What were we thinking back in the early ’80s when we used to turn up for pub gigs with a pair of W bass bins you could sleep in, flared 12‑inch midrange boxes and separate horns, all driven by heavy external power amplifiers? It didn’t even sound that good. With this system I can get the PA and all my guitar kit in the back of a medium-sized hatchback.

JBL’s PRX One is the latest addition to the company’s PRX range of portable column PA systems, offering an all-in-one approach that combines speakers, amplification and a DSP mixer complete with Lexicon effects (delay, reverb chorus, echo and sub synth) and dbx DriveRack-derived processing. The latter comprises automatic feedback suppression, an eight-band master EQ and a system limiter, plus gates and compressors on each channel. As explained, mini line arrays are already less susceptible to audio feedback than typical box systems due to their wide dispersion, but here the addition of dbx’s feedback suppression system means feedback problems really should be a thing of the past. As you might expect from a modern mini line array, there’s also the option of remote control: integral Bluetooth 5.0 connectivity allows for the remote control of up to 10 units using the free JBL Pro Connect app for Android and iOS. In multi-speaker systems, there’s the option to adjust delay times for time alignment purposes (up to 100ms of delay per speaker).

The PRX One can pack quite a punch... but it also manages a very clean, clear vocal sound, which is often a shortcoming with affordable ‘box’ speakers.

Weighing in at a manageable if not exactly lightweight 25.7kg, the JBL PRX One fits the familiar mini line‑array paradigm, having a slim column handling the high frequencies and upper mids, mounted on top of a sub that reproduces the bass and the lower mids. The ported sub cabinet is a robust moulding, as are the column sections, with a steel grille protecting the sub and column drivers. a nylon bag for the column sections is included but there’s no cover for the sub. As with similar systems, the column sections simply slot into the sub and into each other, where integral connectors carry the signal with no need for additional wiring.

The quoted SPL rating is impressive at a hefty 130dB, and because the high‑frequency drivers are arranged over the full length of the column, the wavefront they generate is more cylindrical than spherical, which translates to a longer throw and wide, shallow dispersion, with less energy wasted on the ceiling. To achieve these enviable statistics, the JBL PRX One teams a 12-tweeter column array with a 12-inch bass-reflex woofer, all driven from a Class‑D amplifier with a peak rating of 2000W (1000W continuous). The mains supply can be in the range 100-230 V AC, 50-60 Hz, thanks to the switch-mode power supply. We are informed that the amplifier design includes power factor correction and high-linearity inductors to make efficient use of the system power, with the aim of minimising distortion and providing protection from voltage spikes.

The custom‑designed tweeters take advantage of JBL’s AIM (Array Inumbration Mechanics) array-shading geometry to provide more consistent front-to-back coverage along with an even frequency response. While these column drivers are described as tweeters, they are actually mid/high cone drivers and feature copper-capped pole pieces, which the spec sheet informs us reduce inductance for a smoother response and less power compression. The HF units reach up to 20kHz and cross over to the woofer at 260Hz, the latter reaching right down to 40Hz (-3dB).

When set up the sub’s footprint is only 446 x 375mm, and the top of the column is 2042mm from the base of the sub. Unlike many other mini line‑array systems I’ve looked at, both sections of the column house drivers — there’s no empty spacer column. This is good news from the perspective of controlling directivity, which is quoted as 130 degrees horizontal and just 30 vertical, but it does mean that when playing in those old, often very low English pubs, there’s no option to remove a spacer column if the PA system is higher than the ceiling. However, I found that I could operate the system with just the lower column section installed. I don’t know if that is recommended but it might get you out of trouble as long as you don’t push the system too hard. 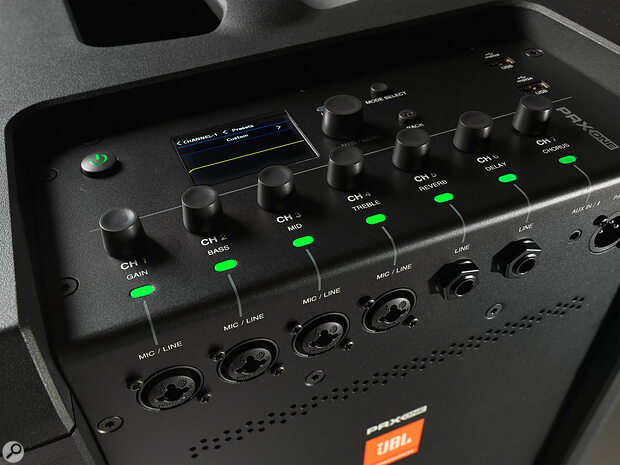 The PRX One incorporates a seven‑channel digital mixer packed with Lexicon and dbx signal processing.

Being part of the Harman stable brings many design benefits, not only the Lexicon and dbx contributions but also a Soundcraft-designed seven‑channel DSP-based mixer. The mixer can accept up to four microphones or line/instrument inputs via combi jack/XLR input sockets on channels one to four. Channels one and two have switchable 48V phantom power. Of the remaining channels, two accommodate line or instrument inputs, while channel seven is for music playback, either via Bluetooth or a TRS minijack. Other connections comprise a male XLR output connector for sending the mixed audio to an external device such as another speaker system, plus a pair of USB 2.0 ports for charging devices or powering AKG wireless systems using an optional JBL adaptor cable. 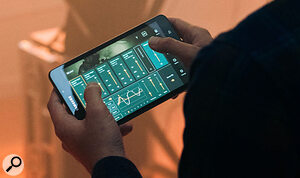 Every function of the PRX One can be controlled remotely via an iPhone/Android app.The mixer can be controlled via its own knobs and buttons, with visual feedback via a colour LCD window and multicolour channel LED buttons, or it can be controlled remotely via the JBL Pro Control Universal app. Music playback can also be streamed over Bluetooth. The mixer and app controls always track each other, so whichever you adjust, the other will show the correct values. a built-in ducking feature, which lowers background music when speech is detected, is available for DJ‑type applications and is easy to set up via the app. Presets let you save and recall go-to settings. Bluetooth pairing with my iPhone proved to be very straightforward, and the JBL Pro Control App is divided into a number of task-specific screens so that you can adjust the section you want without being distracted by parameters you are not currently working on.

There are seven turn-and-press knobs corresponding to the seven channels, each with a Dynamics LED beneath that also doubles as a level meter. In Mix mode the rotaries are used to set the channel volumes. a larger turn-and-press encoder knob doubles as a master volume control, and there’s a Mode selector button to get you back to Mix Mode from Channel Mode.

To avoid intimidating non-technical users, the DSP mixer section is arranged so that it can be approached on different levels depending on the needs of the user. For example, all the effects come with a useful range of presets if you don’t want to dive in and edit your own settings. However, I found it fairly straightforward to get to where I needed to go using the turn-and-press method of navigation, without having to refer to a manual. If the various presets aren’t what you need, then you can delve more deeply into tweaking things like the effect and compressor/gate settings. a metering display shows levels and channel functions while a master Limit LED lets you know when the limiter is stepping in. Pressing a channel knob once selects Channel Strip mode for that channel. Pressing and holding the knob for longer than two seconds mutes the channel. Pressing and holding the Master/Menu knob for over two seconds mutes the whole system.

Briefly pressing the Master/Menu knob opens the Edit menu, unless you are currently in a channel menu screen in which case the Master/Menu knob handles navigation through these screens. In Channel Strip mode, the row of seven knobs controls the key parameters of the selected channel: Gain, Bass, Mid, Treble, Reverb Send, Delay Send and Chorus Send, as printed below the knobs. a Back button enables you to leave the current screen you are in without saving changes — essentially a cancel function. a Setup Saver saves snapshots for easy recall. 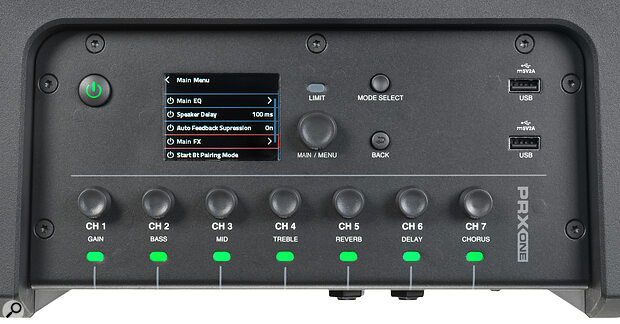 If app control is unavailable, it’s possible to drive the PRX One entirely using its own controls and intuitive menu system.

On testing the system I wasn’t overly surprised at the high quality of the effects given their Lexicon and dbx provenance, but it is pretty impressive to have these built into such a compact system. Furthermore, also having a compressor and gate on every channel makes the mixer pretty serious. With the comprehensive channel EQ plus separate channel sends for echo, reverb and chorus, JBL haven’t taken any shortcuts in this department. Clearly then there’s plenty to dive into if you want to go deeper and tweak your own effects, and there’s provision to control multiple units as part of a larger system, but you absolutely can just use it as it comes without even looking at the menus other than to turn on the effects you need.

Most users will want to know how well the PRX One performs if you are gigging with just a single unit, as that would be the normal setup for a solo artist, duo or a band backed by modest percussion. My first impression was of a touch more available heft than I’m used to from similar format systems — the PRX One can pack quite a punch. Loud and proud it may be, then, but it also manages a very clean, clear vocal sound, which is often a shortcoming with affordable ‘box’ speakers. The wide spread also translates into excellent feedback resistance, even without help from the dbx feedback suppressor, and in smaller venues you can usually position the speaker so that the performers can also hear it clearly, which does away the need for monitoring. Its 12‑inch sub handles the low end pretty firmly, and while you might want two systems for louder band gigs or for when stereo is essential, a single system will fill most pub and club venues.

The PRX One is one of the more powerful mini line arrays available, and comes with some impressive mixer facilities including Lexicon effects and dbx processing. It delivers a loud, clean sound and is very resistant to acoustic feedback.