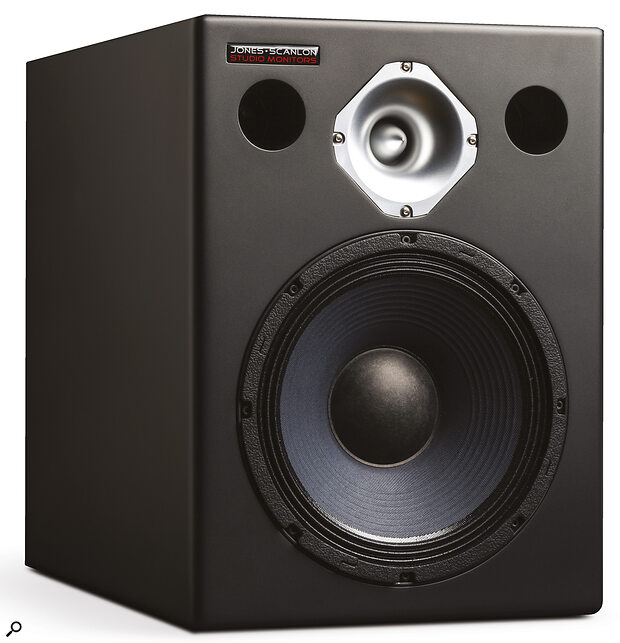 How do you make a great monitor even better? By integrating Sonarworks’ acclaimed SoundID Reference room correction system!

I reviewed the original Jones‑Scanlon monitors back in SOS August 2019. Since that time, the company’s monitor line has expanded, and the long‑anticipated integration of Sonarworks’ Reference 4 room analysis and loudspeaker calibration software — since rebranded SoundID Reference — has been delivered.

Other than a revised DSP board (which can be retrofitted to previously purchased J‑S monitors), the updated Jones‑Scanlon monitors remain unchanged in both construction and electro‑acoustic performance. You’ll find those latter two aspects discussed in detail not only in my original review, but also in Phil Ward’s SOS August 2020 review of the Jones‑Scanlon Baby Reds. John Walden, meanwhile, wrote an in‑depth review of SoundID Reference in SOS July 2021, which I would recommend reading in order to understand its capabilities.

The integration of room analysis and loudspeaker calibration software with onboard DSP in order to optimise the performance of a monitor system in a particular acoustic environment is not a new concept. Genelec, for example, have been developing and implementing their proprietary Autocal calibration algorithm for over 15 years. Neumann and IK Multimedia, using their own proprietary software, have adopted a similar approach. However, as far as I am aware, the ability of the Jones‑Scanlon monitor DSP core to load a room‑correction profile generated by the SoundID Reference room analysis/loudspeaker software marks the first time that an upper‑echelon monitor manufacturer has achieved this level of integration with a third‑party analysis and correction system.

Once you’ve finished the measurement, the program automatically generates a calibration profile and displays a graph of the predicted Flat target frequency curve of your monitor in your room. Having saved that, you then use SoundID Reference’s Export function to create separate left and right binary (BIN) files that contain the calibration data for each monitor as a series of biquadratic Infinite Impulse Response (IIR) filters. The exported files are saved in a default destination folder, which is read automatically by the Jones‑Scanlon upload app. At the time of writing, this app was not ready for deployment, but it should be available by the time that you read this. The online instructions suggest that the upload procedure will then be simplicity itself.

In the meantime, Wayne Jones himself will personally handle the upload process for you — all you have to do is to generate the BIN files and have access to either a Windows PC or a Mac running Windows for the actual upload.Wayne’s concierge service requires you to download and install a Terminal program, a set of DSP drivers and Team Viewer. Once you’ve done that, Wayne will call you at a convenient time and take over your computer via Team Viewer. With you handling the USB connection between your computer and your J‑S monitors, uploading the left and right profiles then takes a mere minute or so. Currently the profiles can only be stored in Room 2 of the four available Rooms on each monitor, although J‑S will have Rooms 1 and 3 also available for profile storage relatively soon. Room 4 will remain as a flat profile with a 38Hz high‑pass filter.

SoundID Reference offers the option to create a Custom target curve, personalised to your taste, derived from the Flat target curve by EQ’ing and/or limiting the frequency range over which correction takes place. This allows you either to preserve the sonic character of your monitors whilst still having the benefit of some level of room correction, to tune the monitor system to your own personal taste, or to emulate consumer playback systems. Once Rooms 1 and 3 come online, they could be used to store these Custom profiles.

My first impression on switching in the calibration profiles and listening to the flat response — which extends from 28Hz to 20kHz — was of an immediate increase in clarity and detail across all frequencies. Given the level of detail and resolution that the uncorrected J‑S monitors are capable of, this came as a bit of a surprise and, frankly, this new sound character took a bit of getting used to, as I’d spent a fortnight or so with the J‑S monitors au naturel. Initially, I didn’t particularly like what I was hearing but, being aware that this isn’t an uncommon reaction to a flat‑response listening environment, I persevered and, having ‘recalibrated’ my ears, I began to appreciate the accuracy of the neutral monitoring environment produced by the Jones‑Scanlon/SoundID Reference combination. 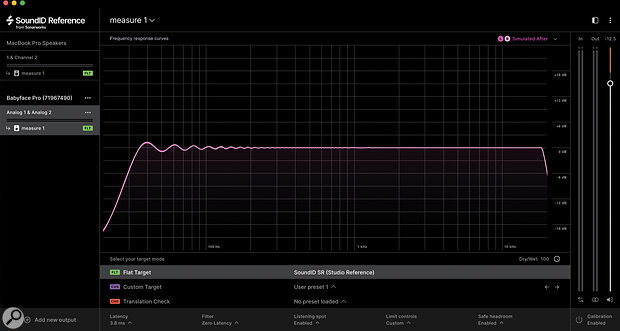 The projected response of a corrected pair of Jones‑Scanlon monitors.

In my room, without correction, these 10‑inch J‑S monitors have more than enough bass to be going on with, and I’ve tended to leave the 38Hz high‑pass filter in circuit most of the time in order to keep control of the bottom end. However, corrected to a flat response in the room, that filter became somewhat superfluous, simply because the subjectively increased definition in the low frequencies, particularly in the 30‑60 Hz octave, was quite stunning. The low B strings of five‑string electric bass guitars, orchestral double basses with low C extensions, and normal double basses were reproduced with a subjectively increased authority, clarity and sense of reality. Even the Octobass (see YouTube video https://bit.ly/3KiVMiu) got a look‑in this time!

This increase in bass definition was also evident whether I was listening to EDM tracks, orchestral recordings or indeed any music with low‑frequency content. Moving across the midrange and treble areas of the frequency spectrum, the subjective improvement in resolution was again extremely impressive, the increase in clarity bringing low‑level details more to the fore across the frequency spectrum, the sum of which led to a palpable sense of presence and a pin‑sharp positioning of sources in the stereo soundfield.

In all my listening, I didn’t come across a single well‑recorded voice or instrument that didn’t shine under this sense of presence. However, I can’t say the same for all the recordings that I auditioned, as the detail revealed by the J‑S/SoundID combination leaves recordings, mixes and masters with technical issues nowhere to hide.

The integration of SoundID Reference software within the DSP of the Jones‑Scanlon monitors is a resounding success.

To me, the integration of SoundID Reference software within the DSP of the Jones‑Scanlon monitors is a resounding success. SoundID Reference’s detailed, 20‑minute measurement process has the capability to calculate a highly accurate room correction profile that can be translated by the Jones‑Scanlon monitors’ powerful DSP core into a nominally flat response within a room, thereby delivering an increased level of monitoring accuracy.

Having a room correction profile running inside the monitor DSP, rather than as a DAW master bus plug‑in, is a concept that I feel could well become mainstream in the future. For me personally, exploring flat‑response monitoring in detail has been an interesting and illuminating experience. As a musician, I can see advantages in working with a flat‑response monitor profile when recording and mixing, and creating various other profiles either to mimic other monitor responses, or to check mix translation in different playback systems and environments.

My high opinion of the Jones‑Scanlon 10‑inch, two‑way monitors from my original review remains unchanged. However, this integration with SoundID Reference room analysis and correction software can take their real‑world, in‑room performance to another level, which means that these are monitors that you really, really should audition if you have the space and budget to accommodate them.

The closest alternatives that I can think in this niche segment of the monitor market are The Ones series from Genelec.

An Australian‑manufactured monitor system whose inherently articulate, clean, clear and extremely detailed performance is further enhanced by their integration with the SoundID Reference room analysis and correction software.