Stormzy: Making 'This Is What I Mean' 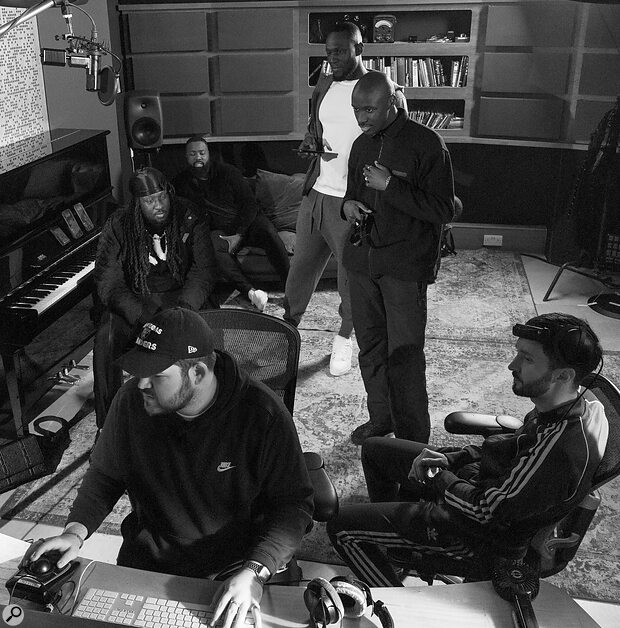 Britain’s most high‑profile rapper has made his most ambitious album yet — with a little help from his friends.

“Studios are a funny one for me,” grins Stormzy, as he considers what makes him decide to choose a particular recording space. More than equipment, or even location, the key factor is usually whether or not the rapper feels instinctively comfortable in the room. “It’s just a spirit, man,” he adds. “Like, even walking in here, for whatever reason, I feel like I could record here.”

Here being The Bridge Studio in London SE1, where Stormzy and his team are putting the finishing touches to a couple of mixes for his third album, This Is What I Mean. It’s the first time they’ve used this particular studio, the latest in a line of London facilities they’ve hired that has included Metropolis, West Point and Studio 13, the studio owned by Damon Albarn which is not typically available for commercial use. “People don’t really use Studio 13,” Stormzy says. “I used to record next door in The Bunker [writing room owned by producer Stephen Street]. I just had a couple of good experiences there. So yeah, we ended up in Studio 13 and just stayed there.”

However, at the heart of the sessions for This Is What I Mean was a month spent in a remote and unusual location: Osea Island, situated in the River Blackwater in Essex. There, in April 2021, Stormzy holed up with executive producers Kassa Alexander aka PRGRSHN and Tendai Senyange, engineers Joel Peters and Calum Landau and featured collaborators including Jacob Collier and Debbie Ehirim, cutting themselves off from the world in an intensive writing and production camp.

“I always wanted to do a camp,” the rapper says. “Wake up every day, and we’re on music.” In this way, the making of the new album contrasted with that of its predecessor, 2019’s Heavy Is The Head, which was written with a legion of different producers in multiple studios. “Especially off the back of Heavy Is The Head,” Stormzy stresses, “where I was all over the gaff, I always thought, ‘If I make a concentrated, conscious effort in one place, with all the best musicians and producers and artists, I’ll thrive there.’”

This Is What I Mean retains the original grime spirit that propelled the 29‑year‑old South London rapper from the streets of Croydon to the cover of Time magazine and his headline slot at Glastonbury’s Pyramid Stage in 2019. At the same time, it finds him venturing into new sonic territory, where distinct echoes of classic ’70s soul can be heard alongside the thumping beats. As he raps on the album’s title track, “I think I’m Kanye mixed with Donny Hathaway.”

But Stormzy’s plan wasn’t always to make a soul album. “Nah, I didn’t have that in mind at all,” he says. “I wanted to make kind of like a hard rap album, if I’m being honest. We went to LA just before the pandemic and then we had to come back. Lo and behold, a couple of years later, we’ve got this album. Nothing about it was planned.”

Stormzy — real name Michael Ebenezer Kwadjo Omari Owuo Jr — was only 12 years old when he first recorded one of his raps, using a desktop PC and Acoustica’s Mixcraft software. “It would have been a £1 mic from Poundland,” he laughs. “Literally, we used to get one pound mics. Then just record, press bounce, and you was good to go.”

Through his appearances with Walthamstow collective the HeavyTrackerz, his own self‑released mixtapes and collaborations with Chip and Lethal Bizzle, Stormzy soon gained experience of professional recording setups. He says he didn’t feel intimidated whatsoever when he first set foot into a studio environment. “No, cause it wouldn’t have been like a solo recording process. It would have been loads of us. And it would have been a beat and then everyone goes in and does their bit, and then we might do a couple of ad libs. I think maybe when I went by myself the first time, that might have been more intimidating than everyone just in the studio smoking weed, having fun.”

Following independent hits ‘Know Me From’ and ‘Shut Up’ in 2015, he began licensing his own #Merky Records releases through Warner Music, including his debut solo album, 2017’s Gang Signs & Prayer, made at Matrix Studios in Fulham with producer Fraser T Smith. “That worked really well,” Stormzy says, “’cause firstly Fraser is incredible at what he does. Secondly, we recorded it in one studio. It was like a hub. I would go there, we’d have a whiteboard there. Especially for my first album, it was just good to know that I was going to one place to create my album. And I’ve got this phenomenal producer, this phenomenal engineer, Manon [Grandjean]. That was the great thing about working with Fraser. If I wanted to make some soul, if I wanted to make some grime, he would be able to facilitate everything.

“Then the second album was just the total opposite. That was kind of going out into the big wide world and, like, different producers, different studios, different files, different engineers. When I look back on it, I think that’s what needed to happen at that time. Because I was doing Glastonbury and all that, which was extremely overwhelming.”

But Stormzy decided to change his operation again for This Is What I Mean, and assemble a single, dedicated team. “One thing about me is my spirit always tells me what I need to do,” he says. “So, I knew that I needed to just get my bearings straight.”

“Two years ago,” says executive producer Kassa Alexander, “Stormzy sent me a song that he’d started writing with a pianist called Dion [Wardle]. And he was just asking what I thought. Then we kind of talked about different things we could do to progress the song.”

Alexander sent Stormzy what he calls a “soundboard playlist” of songs he felt could be used as reference points for the album, including tracks by Kanye West, Frank Ocean, Drake and Kendrick Lamar. “It’s a bunch of songs, I think, that could have been Stormzy songs,” Alexander says. “He texted me back and he was like, ‘Aw, it’s like you’re in my head. You want to executive produce my album?’”

Work began in late 2020 at Studio 13 where, encouragingly, the foundations of the album’s opening track, ‘Fire + Water’, were very quickly laid down. “It just set the tone,” says Alexander. “In the sense that, like, this album is going to be based on truth, it’s going to be vulnerable, it’s going to be honest. And it’s going to be soulful. That was, I guess, the flag in the sand.”

Alexander had recently switched over from Logic to Ableton Live. “I went to LA, and I did this camp,” he explains, “and everybody was making music faster than me. I was like, ‘How?’ I’ve been using Logic since Logic 4, so I was fast on it. But everybody was able to make these records just quick, quick, quick. I spoke to a producer, and he was like, ‘You need to use Ableton. It’s a lot more intuitive and it always takes tempo and pitch into consideration.’ Obviously, because people use it for live shows and for DJ’ing, it’s really good for that.”

Co‑produced by PRGRSHN and KZ, ‘Fire + Water’ is an eight‑minute‑long epic on the finished album. But it didn’t start life that way. “That track never felt difficult to make,” Stormzy stresses, “because it was never like, ‘We are making this fucking stonker of an intro.’ Me and PRGRSHN made the first bit, just very naturally. He started playing the chords. I just grabbed the [Shure] SM7. The vocal you hear on the hook is the original vocal I sang on that day, sat down on the sofa.”

Engineer Joel Peters, who was trained at SARM Studios by Trevor Horn, was brought into the project by Alexander. “There was a period when we were all kind of learning what the record might be,” says Joel. “There were lots of conversations. A few tracks had kind of started to take form. But it was really only that period at Osea Island when we really got a sense of what the album was going to be and the songs kind of materialised. We did a few sessions in Metropolis, a few sessions in West Point, late 2020. But then Osea was just the explosion of having all the minds under one roof.”