Like me, you’ve probably come to expect BAE’s logo to adorn the front panel of a hand-wired, hand-soldered, reassuringly expensive preamplifier, equaliser or compressor, built to the vintage 1960s and ’70s specifications of a classic console manufacturer. But it now appears on a boost/fuzz pedal too: launched at the 2017 NAMM show, the Hot Fuzz is BAE Audio’s first foray into the world of guitar effects pedals.

Founded in Los Angeles in the late ’80s, BAE built a business rackmounting modules from unwanted vintage Neve consoles. The company then moved into remanufacturing, becoming the first to offer a recreation of the legendary Neve 1073 module, and they built on this to create an extensive range of vintage Neve recreations and updates. In more recent times the company have also moved into the 500-series market, and now produce seven different modules, of which two are Neve-inspired.

When founder Brent Averill retired in 2009, the company was purchased by employee, keen guitarist and ex-pat Mancunian Mark Loughman, whose return to gigging (as he explained to Paul White at the 2013 NAMM show) led him on a fruitless search for a Dallas Rangemaster treble booster and Colorsound distortion. The failure of that search resulted in BAE’s creation of the Hot Fuzz, a hybrid treble booster and fuzz box designed to recreate some of the classic guitar sounds of the ’60s and ’70s.

Out On The Range

Early British-made amps such as the Vox AC30 and Marshall JTM45, when compared to their American Fender contemporaries, tended to sound woolly and dark when being overdriven, especially when humbuckers were involved. Although Vox introduced a ‘Top Boost’ feature in 1961, that circuit — which was lifted, practically wholesale, from the tone stack of the 1950s Gibson GA-70 — was intended to improve the overall treble response of the AC30, rather than improve its overdrive sound.

In 1965 or thereabouts, Dallas introduced the Rangemaster Treble Booster, a small rectangular box that sat on top of your amp and which featured a front-panel jack input, an on/off slide switch, a Boost Set knob and a hard-wired captive output jack lead. Its electronics were minimal — one germanium transistor (usually a Mullard OC44), four capacitors, three resistors, a variable boost pot, a jack socket and a 9V battery, all hand-soldered together inside a simple, grey-painted metal enclosure with a decidedly 1950s aesthetic.

Electronically, the Rangemaster acted not only as a high-pass filter but also as a frequency-dependent level boost that provided up to 24dB of boost above 1kHz or thereabouts, the boost doubling (approximately) per octave. The high-pass filter cleaned up the bass end, whilst the boost added increasing presence and definition to notes and their harmonics the higher up the fingerboard you went — which was precisely what was needed to compensate for the dark and muddy depths of the early British amps, and to make them sound more ‘Fenderish’.

Perhaps a more important contribution to the sound of the Rangemaster was the biasing of its germanium transistor at close to its cutoff point. This setting resulted in asymmetric compression of the signal waveform, creating a subtle distortion at low levels. As the signal level increased, the transistor was forced past its cutoff point, producing full-on distortion at higher levels. Add to the mix the Rangemaster’s inherent ability to overdrive a valve amp’s input and the result was a distinctive-sounding effects unit whose list of reputed users has included Eric Clapton, Richie Blackmore, Marc Bolan, Tony Iommi, Rory Gallagher, Brian May, Billy F Gibbons and more.

Given the controls available in its fuzz section, the distortion pedal that Mark was searching for before he started the Hot Fuzz project was probably the Colorsound Overdriver, a silicon-transistor boost/overdrive pedal first released in 1970. Manufactured by London’s Sola Sound Ltd (manufacturers of the legendary Tonebender fuzz box), the Colorsound Overdriver delivered a clean, transparent boost at low drive settings that largely preserved the guitar’s dynamics. Its bass and treble controls enabled the creation of a wide range of tonalities and were capable of powerful bass and treble boosts. Increasing the drive control not only started to overdrive the front end of any amplifier (tube or otherwise) but also brought out the pedal’s own overdriven fuzz tones.

Wound up to where it really sang and sustained, the original Colorsound Overdriver produced a high level of gain that really needed an overall output control to avoid crucifying an amplifier’s front end, a feature that was eventually incorporated in the 1996 Dick Denny-modified reissue. As with any good gain-based pedal, the Overdriver responded well to a guitar’s volume control and pick dynamics, allowing the player to balance a guitar’s output with the pedal’s tone and drive controls to get the distortion sound and control that was required. Notable Colorsound Overdriver users are said to have included Dave Gilmour, Marc Bolan, Jimmy Page and Jeff Beck. 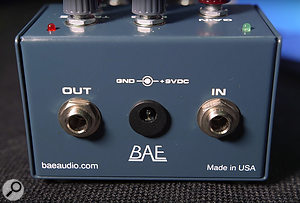 The Hot Fuzz can accept power from an external PSU or an internal 9V battery.Housed in a chunky and extremely sturdy steel enclosure with a decidedly Neve-like aesthetic, the BAE Hot Fuzz has an air of class and solidity that belies its relatively modest price. Divided into two clear sections, by spatial geometry and legending rather than by discrete borders, the front panel carries the gain and true-bypass footswitch of the high-frequency boost on its left side, whilst the central and right-hand area is occupied by bass, treble, Juice (Drive on the original Overdriver) and gain, which is the overall volume control. The rear panel carries the input and output on metal quarter-inch jacks and the connector for a 9V DC power supply. There’s no PSU included, but the unit does ship with an internal 9V battery. Rather inconveniently, though, changing the battery requires unscrewing the eight easily lost, miniscule, non-magnetic countersunk crosshead bolts that hold the Hot Fuzz together... so it might well be worth committing to an external PSU.

Performance-wise, the Hot Fuzz’s high-frequency boost doesn’t quite deliver the Rangemaster’s extreme level increase above 1kHz — I’d guess that present-day tube amplifier voicings mean that such extremity is no longer required — but there’s still a healthy +9.2dB peak (referenced to 0dB gain at 1kHz) at 7.5kHz, which then begins to tail off slightly. The high-pass filter and overdrive are both still well in evidence though, and overall this section of the Hot Fuzz operates in a similar fashion to its inspiration. In contrast, the fuzz section of the Hot Fuzz appears to have remained pretty much true to the Colorsound Overdriver in operation and effect, other than adding the essential overall volume control.

With the Hot Fuzz, there’s a great temptation to just turn everything up and get it on, but time spent understanding how to dial the pedal in to suit your playing style is time well spent. To me, the high-frequency boost section is as much a source of treble enhancement and overdrive as it is anything else. If you turn that section’s gain control down you’ll be left with silence, so the best strategy (for my needs, at least) is to begin with it set at around 11 o’clock, where the output will be at approximately the same level as the bypassed signal, but with its high-frequency content boosted and its bottom end attenuated. If I’m using the high-frequency boost on its own, I’ll work with its gain and my guitar’s volume and tone controls to get the sound I want, and if not I’ll come back to it to dial in the amount of boost needed to get the sound that I’m after when it is being cascaded into the fuzz section.

The Hot Fuzz’s fuzz controls are equally easy to set up, except this time you’ve got treble and bass controls and an overall output level control to work with, plus the Juice control that, in conjunction with your guitar’s volume control, determines the eventual amount of boost, overdrive or fuzz in this section. Personally, I really enjoyed building a rhythm sound with a solid bottom end (balanced by a slice of treble) plus an edge of fuzz and crunch that just started to overdrive my amp’s input, and that could then be pushed into flab-free distortion by simply kicking in the high-frequency boost with its associated bass cut. There is plenty of boost available when the two sections are cascaded, and the maximum 47.5dB at 7.5kHz should be enough for anybody.

If you’re into the overdriven fuzz sounds of the 1960s and ’70s, you’re going to love the way the Hot Fuzz nails that particular sonic aesthetic. However, if you can resist its sonic mayhem, you’ll find that the Hot Fuzz’s inherently low noise floor means that it can be used to add a subtle (or not-so-subtle) enhancement to your sound. It’s definitely a pedal to audition and very probably one you’ll enjoy.

There’s no direct equivalent that I know of to the Hot Fuzz, but to equal its performance you’re going to have to look at models from clone/reissue manufacturers. If you’ve got the budget, I’d suggest starting with either JMI’s Rangemaster recreation or Analog Man’s Beano Booster in combination with either Macari’s Colorsound Power Boost reissue or the Lee Hooker Color Trip.

An attractively priced, treble boost/fuzz box combination that can nail the vintage sounds of the 1960s and 1970s, subtly (or blatantly) enhance the sound of your guitar or bass, and generate enough sonic mayhem to please the heaviest metal maniac on the planet.