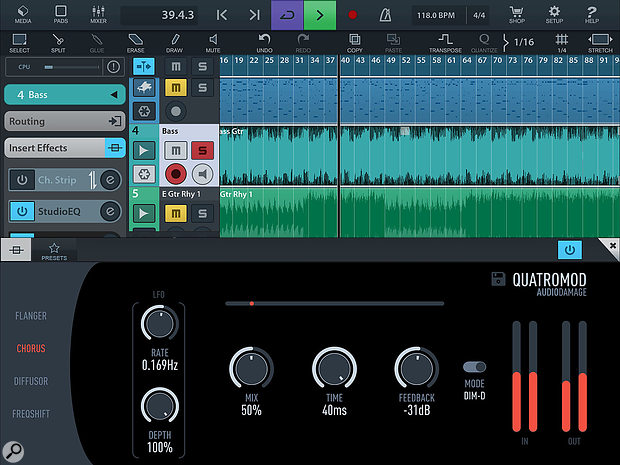 Well-known plug-in developer Audio Damage have, over that last year or so, gradually been porting their desktop offerings to iOS. This includes Grind Distortion (reviewed in the November issue) and the excellent Eos 2 and Replicant 2. The latest offering is QuatroMod and, as its name suggests, this app offers a range of modulation-type effects. It is a 15MB download, universal in nature, requires iOS 9.3 or later and runs as either a stand-alone app or as an AU plug-in in a suitable host.

Like its desktop namesake, with which it shares the full feature set, QuatroMod offers four ‘modes’ of modulation processing: Flanger, Chorus, Diffusor and Freqshift. The user can toggle between these modes via the text buttons located on the left of the very slick UI. Audio Damage have provided an excellent suite of presets for each of the four modes.

The chorus and flanger-style effects will be familiar to most music makers as they are ‘standard’ effect types. Both the Diffusor and Freqshift modes, however, offer something a little less conventional. Freqshift is not unlike a sort of (very versatile) autowah-type effect, where a filter can be swept in various ways across the audio signal. I’m less sure I really know what the Diffusor is doing but if you can imagine a sort of ambience effect combined with modulation/pitch-shifting you will at least get someway there. This is based upon elements of Audio Damage’s Vapor plug-in. Whatever is actually being done, it could sound very cool or totally weird depending upon just how hard you push the controls.

Modulation effects are something that I tend to prefer lightly done and, thankfully, QuatroMod is more than capable on that front. However, if you like to get more creative with your modulation, then this is certainly one of the more versatile options currently available for iOS. Sonically, it really does sound good and, whatever algorithms are sitting under the bonnet here, they are very well designed. Whether you want to gently thicken a vocal, give a static bass sound a bit more movement, widen a synth pad or send a drum loop into a modulated tailspin, QuatroMod is more than up to the task and will do it with some considerable control and style.

I had no technical issues using the app and, while it worked fine stand-alone, most iOS music makers are going to slot the AU plug-in into their favourite AU host. I tried the app with AUM without any problems. On the desktop, QuatroMod is priced at around the £40$50 mark. The fact that you can buy exactly the same effect for around 10 percent of what is already a fairly modest price is pretty remarkable. As a user, the App Store’s pocket-money pricing never ceases to make me smile. Quite what it means for the longevity of developers is another matter. However, until economic reality kicks in, QuatroMod remains a complete iOS bargain for those wanting a classy modulation effect.