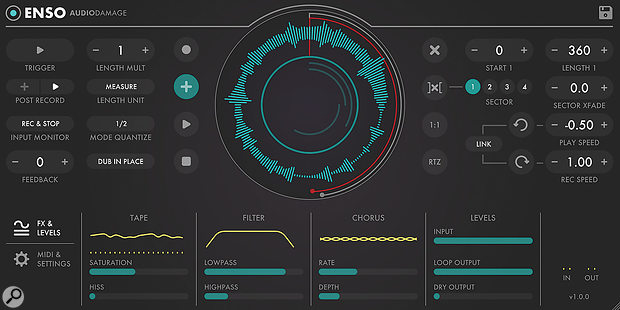 What more can this plug‑in offer than the hardware that inspired it?

Modelled after both tape-based and digital looping hardware, Enso is technically an effect but it offers performance controls, such as record, play and overdub. The GUI, with scalable window, flat controls and pastel colouring, is dominated by a rotary waveform display. To the left and right are settings and performance controls, while the bottom of the window is dedicated to effects, mixing and MIDI control.

Starting with a blank slate, the record button kicks off the recording phase, for a maximum record time of a minute of stereo at 48kHz or 10 times that in 'long memory' mode. The recording buffer grows as the recording progresses; once you flip into overdub or play, the buffer is fixed and subsequent operations act on audio recorded in that range. Returning to record mode overwrites existing audio.

In use, having hit play in your DAW (required for timing), you'll record first and then switch between overdubbing, playback and over-recording. For drum loops or other rhythmic material, you'll probably want the mode-switching quantised to bars and beats and 'mode quantise' will do this, with a resolution from 16th notes to a whole bar. It it can also be left unquantised.

The first tap of the 'trigger' button activates record, and subsequent taps alternate between play and overdub, which is clearly designed to be mapped to a footpedal. The timing of the initial trigger respects the same quantise settings as the other controls, but additional settings for length unit and length multiplier will kick the trigger mechanism out of its initial record phase automatically, straight into overdub or play, with the buffer length sync'ed to the beat. The remaining left-hand controls set a Dub In Place mode and the amount of feedback when dubbing (how much the existing audio is attenuated when new audio is merged with it).

There's only a single audio buffer, but Enso supports four regions, each denoted by a start and length value, measured in degrees: 360 is the entire buffer, 180 is a half, and so on. At any stage, you can switch to a new sector and start recording, overdubbing or playing just that part of the buffer, leaving the rest intact (though the sector switching doesn't take immediate effect if you're recording or overdubbing at the time). To stop the switching sounding glitchy, a crossfade control interpolates a fade of up to one minute between sectors. (A visual indication of progress through long fades would have been nice.)

Further controls allow the overall playback speed to be altered (up to four times the original) and playback to be reversed. To really expand Enso's capabilities, the record 'head' can be decoupled from the play 'head' and can travel at a different speed or in the opposite direction. The combination of dynamic sector selection and different record and play speeds/direction allows complex results, even from simple sources.

If record and play are at different speeds, the result can be a cascading spiral of pitch-shifted effects, as each play/record pass shifts everything up or down.

The effects section includes a tape emulation with variable saturation and hiss, low- and high-pass filters, and a simple chorus, all of which are made more useful by Dub In Place. When this is on, new audio is mixed into old under the record head. Turn it off and Enso-the-looper turns into Enso-the-tape-delay; overdubbing grabs the audio from the plug‑in's output, post-effects, mixing it with incoming audio back into the buffer at the record point.

If record and play are at different speeds, the result can be a cascading spiral of pitch-shifted effects, as each play/record pass shifts everything up or down. (True to Enso's analogue roots, if the DAW tempo changes, so does the pitch.) The speed controls can be set to nudge up and down by octaves, fifths or semitones for pitch cascading that stands a chance of remaining melodic. By accident, I built a wonderful Shepard tone-like swirling soundscape that reset itself every couple of minutes as the record head lapped the slightly slower play head. The audio buffer is saved with the plug‑in instance, so you can keep any such happy accidents.

Many controls support automation but, surprisingly, some don't (eg. record and play speed and feedback) and technical considerations mean that the momentary control buttons can't be automated, though they are MIDI-mappable.

With such scope for rich, unpredictable effects, you may wonder how Enso fares in rhythmic situations, such as with drum loops. The answer is: respectably, but not without niggles related to sync and quantisation. While record, overdub and playback can be quantised, sector selection cannot. The initial trigger recording can be quantised, but subsequent switches between overdub and play can't, which can cause the record head to shift out of sync with playback. Rewinding the DAW's transport resets the play head but not the record head. A handy return-to-zero button will reset both heads, if you can hit or MIDI-trigger it at the right time. Audio Damage tell me control quantising is under review for a future release. But if you don't mind a bit of manual stopping, resetting and starting, all manner of deep ambient feedback effects and some catchy industrial rhythms are all yours for the looping.