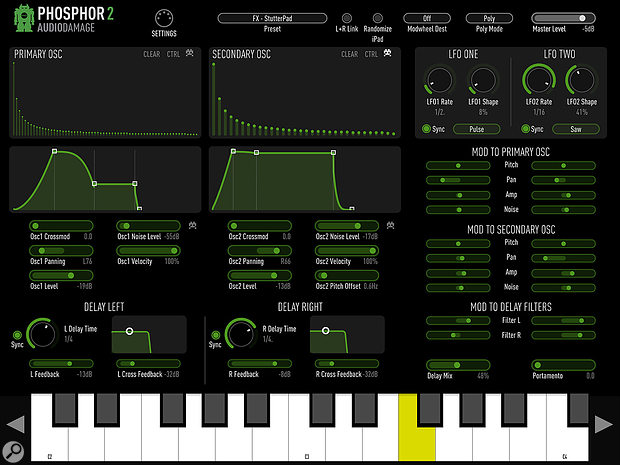 Phosphor 2 runs as a stand-alone app (as shown here) and also as an iOS AU plug-in.

Well‑known desktop plug‑in developers Audio Damage have ported a number of their rather cool audio effects plug‑ins over to iOS within the last 12 months or so. The port of Phosphor 2, however, is the first of their desktop virtual instruments to get the same treatment. The iOS version brings exactly the same features as the desktop version, both in terms of controls and sound. The synth is modelled upon the alphaSyntauri, which is a vintage (early ’80s) digital synth, originally designed as a lower‑cost competitor to the Synclavier and Fairlight. It wasn’t an overwhelming commercial success, but the sounds were great and original hardware examples are highly sought after (and highly priced) amongst collectors.

Of course, if a decent stab at the sound, the convenience of a software interface, and the price of a Happy Meal are more your thing then, at just £$5.99, Phosphor 2 might be a more appropriate solution. The UI is very slick and, in the stand‑alone version, the vast majority of the controls are contained within a single screen. The app has good MIDI support, offers IAA and, with a modest re‑rig of the UI, also runs as an iOS AU plug‑in in a suitable host such as Cubasis, Audiobus 3 or AUM.

The synth engine is built around a twin additive oscillator/envelope model. While the oscillators offer the same (limited by modern standards) options as the original hardware, there are a few places where Audio Damage have respectfully enhanced the specification, and these give the user considerably more options in terms of sound. For example, in the original hardware, you could stack up to 16 waveforms, but in Phosphor 2 you also get options for 32 and 64 — and this does, of course, give you a much wider range of tonal options.

The engine includes some very usable modulation options with twin LFOs offering a range of waveform types and wave‑shaping. There is also a neat delay effect built in. This is not, though, some mega‑synth with enough parameters to make your head explode; even a novice programmer could soon grasp what was going on.

So what about the sound? In principle, additive synthesis ought to let you create almost any sort of sound if you can combine the various stacked sine waves in the right fashion. With up to 64 of these and two oscillators, Phosphor 2 ought to be quite a flexible sound source. It is — and the presets do a decent job of demonstrating this variety (although I’d have liked a few more presets and, in particular, a few more bass‑based examples). There are some very nice sounds amongst the keys, lead and pad categories though and the vintage vibe of the alphaSyntauri does come through in a lot of the sounds. If contemporary EDM is your music of choice, then there are perhaps more obvious synth choices (for example, Poison‑202, if you want an AU‑based synth) but, if classic synth rock is your thing, then I think you will like Phosphor 2 a lot. And, at this price, it is an absolute bargain.