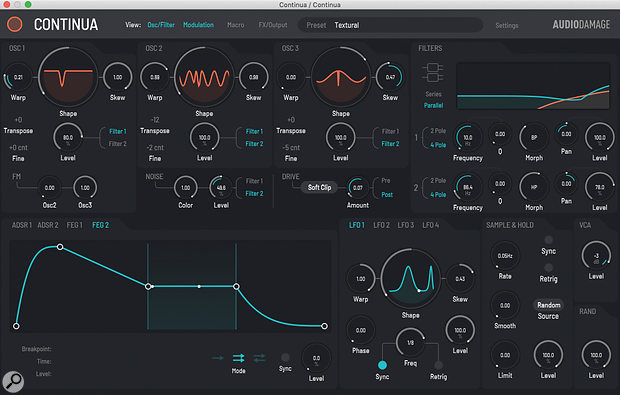 Continua is a three-oscillator, twin-filter analogue-style synthesizer plug‑in for Mac, Windows and iOS, and there's even an experimental Linux build too. While there's plenty familiar about Continua — oscillators feed into filters, and there are envelopes, LFOs and modulation sources — some of the controls are a little unusual, and the animation on the GUI is striking: oscillator waveforms twist and writhe in real time, filter graphs ebb, flow and bend as notes are played, and indicative dots move along envelope and LFO shapes.

In place of a conventional waveform selector, a Shape control morphs between different waveforms. Put the Shape control at its halfway point and you get a sine wave, and you increase the value to transition smoothly through a square to a sawtooth wave. Turn it the other way, and it remains a sine wave unless you tweak two other parameters, Warp and Skew. The manual is slightly evasive about what Warp and Skew do, but warping seems to be a kind of wave-folding, generally resulting in a kind of resonance effect, while skewing shapes the wave cycle, rather like pulse-width modulation. Shape, Warp and Skew interact to deliver a dizzying range of waveforms, and Warp and Skew also exert an influence when the Shape control is in its square and sawtooth region.

Making things yet more complex, the first oscillator can be frequency modulated by the other two, and there's a per-voice overdrive/waveshaper (switchable pre/post-filter), to really crank up the harmonics. Similarly, each of the two filters, which can be arranged in series or parallel, can morph continuously between four modes, independently of the cutoff frequency or resonance. (The two-pole/four-pole selection is discrete).

The four LFOs per voice also have the Shape, Warp and Skew parameters, but behave slightly differently. Notably, Warp and Skew are bidirectional for the LFOs, leading to wave shapes that seem more useful when modulating. The LFO frequencies can be set in Hertz or Metric Time. The latter has a note retrigger option and I was pleased that, with retrigger off, the LFOs picked up in the right part of the waveform, depending on the bar and beat position, which is useful for beat-sync'ed rhythmic effects.

In place of a conventional waveform selector, a Shape control morphs between different waveforms.

The two ADSR envelopes are largely conventional, although the segments can be curved in a positive or negative direction. In contrast, the two FEGs (flexible envelope generators) allow an arbitrary number of breakpoints, and can be looped. The FEGs can also sync to bar and beat units, offering yet more opportunities to generate rhythmic material, although the loop's length will change if you drag segments around inside it. (It would be nice if you could lock the loop points.)

A sample-and-hold source again supports Metric Time and has a retrigger option. This can sample from a random source, an LFO or an envelope. Sample-and-hold can be smoothed, and its step size can be limited to produce a 'random walk' of meandering output.

The modulation matrix is a new design, in which modulation of a control is established via the control itself. Right-click a knob to bring up a modulation panel, and you can select up to five modulation sources, each providing a selectable amount of input, positive or negative. (Some sources, like envelopes, are unipolar; others, like the LFOs, are bipolar.) When modulation takes effect, a thin blue ring emerges around a control to show how far it's been modulated from its initial setting. While this shows the modulation setup as it's happening, there's no easy way to see how many controls a particular modulator is affecting. Modulation can come from MIDI notes as well, including channel pressure, and Continua is MPE-capable, supporting poly pressure, glide and key position input on devices like the ROLI Seaboard.

Continua's second display panel provides further modulation sources: eight macro knobs (which can themselves be modulated) and two X‑Y pads (which cannot, but do respond to DAW automation). A triple oscillator waveform display seems superfluous — the screen real estate could arguably have been put to better use. This panel is rounded off with controls for the built-in effects (a Roland-style chorus, a stereo delay and a reverb, that all sound as good as many stand-alone effects) and the output. Modulation can be applied here as well, from a limited set of global modulation sources, or from some voice sources; the last voice triggered takes precedence. Finally, a small drop-down settings panel allows some controller configuration and, if you have some TUN files, alternate tunings.

The overall sound of Continua is precise and digital, and many presets show off the modulation capabilities through bright, swirling, animated textures — all the more so once I'd tweaked them to respond polyphonically to my Seaboard! I was most impressed with some of the clean, punchy bass patches, whose expressiveness is helped by Continua's monophonic legato and glide support. If you go overboard with oscillator modulation, some of the higher harmonics can be a little harsh — moderation is the key, and the excellent effects also counteract the digital sharpness with warmth and richness. It looks great too, though the animation on one instance consumed 50 percent of a CPU core on my MacBook, so I'd advise closing the window when not actively editing!