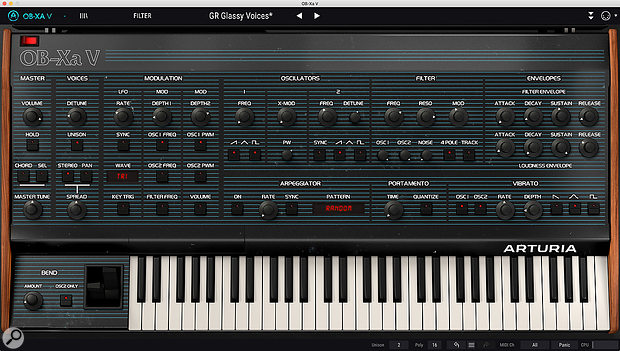 Arturia's V series of virtual instruments started in 2004 with Minimoog V, and this was followed by emulations of classics such as the ARP 2600, Roland Jupiter 8 and Yamaha CS80. In those early days, the company sometimes got it right and sometimes less so, but by the time that they released last year's V Collection 7, there was no longer any question that their software could successfully emulate a long list of cherished instruments. I've reviewed many of these, but it always seemed to me that two of the greats were missing: the Memorymoog and something from the Oberheim OB‑series. But today, half of that has been corrected.

There would have been little point in modelling the earliest of the OBs, the OB‑X, because it was closely related to the 4-Voice and 8-Voice, and that territory has already been covered in large part by Arturia's SEM V. (See the 'A Bit Of OB History' box.) However, I was a little surprised to find that Arturia chose the OB‑Xa as the basis for their OB‑series soft synth. Perhaps that was a marketing decision; for reasons that escape me, the OB‑Xa has always had a better reputation that the OB‑8. But while Arturia may have chosen the OB‑Xa name, they haven't stuck to the OB‑Xa architecture. Indeed, OB‑Xa V might more properly have been called OB‑X/Xa/8 V, although that would be a lousy name for a product.

You can immediately see the differences between the original OB‑Xa and the soft synth when you compare their oscillator sections. Whereas the original offered just sawtooth, pulse (with PWM) and saw+pulse wave options, the soft synth adds the triangle wave of the OB‑8, which is a sensible and useful addition. You'll also find a cross modulation (X-Mod) knob sitting between the oscillators. Cross-mod was one of the main features of the OB‑X, but was dropped by Oberheim on the OB‑Xa, so it's great to see it reinstated here, especially since you can now determine the amount of modulation. And, while it appears that the OB‑Xa's ability to sweep the pitch of Osc 2 using the filter envelope has been lost, this is easily programmed in the soft synth's modulation matrix. Another change lies in Arturia's repositioning of Osc 2's fine-tuning control. They have moved it from the Control section to the Oscillators section, which is a more significant modification than at first it seems.

Further differences are apparent in the filter section. On the OB‑Xa, there were six possible oscillator mixes: Osc 1 could be off (0 percent) or on (100 percent), and Osc 2 could be off (0 percent), half (50 percent) or full (100 percent). In addition, noise could only be on or off. Arturia have sensibly replaced all of these buttons with variable amplitude controls for both the oscillators and the noise. The rest of the filter section is common with both the OB‑Xa and the OB‑8, with knobs for cutoff frequency, resonance and modulation amount (actually contour amount), plus switches for the 12dB/oct and 24dB/oct modes and 100 percent keyboard tracking on/off. (Other tracking rates can be programmed in the modulation matrix.) The filters on the original synths never quite oscillated in either mode, but the resonant peak seems a little more pronounced on the soft synth and that's no bad thing.

All OBs had two ADSR contour generators, and these are reproduced here. They weren't the snappiest in the world and, at their minimum settings, those on the soft synth are considerably faster; if you want to achieve the same 'spit' as you obtained on the original, you have to slow the soft synth down a little.

The modulation window offers modulation capabilities far in excess of what was possible in 1983.

Like much else here, the OB‑Xa V's modulation section is...