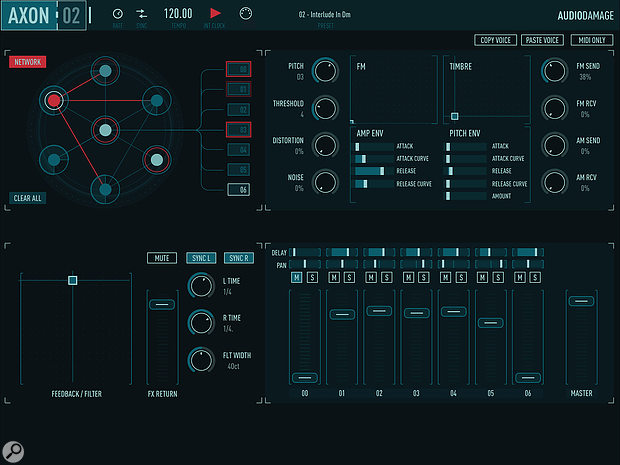 The majority of Axon 2’s functions are accessed through the main screen.

As we have covered before in this column, Audio Damage have ported a number of their excellent desktop plug-ins over to iOS within the last 18 months or so. These have included various audio effects but, most recently, their first iOS synth in Phosphor 2. We now have another Audio Damage instrument app on the App Store; Axon 2. It’s another synth, but this time aimed at drum synthesis and, if the App Store blurb is to be believed, also features a dollop of artificial intelligence. So, if you like your virtual drum instruments to come with a bit of a twist, is Axon 2 worth a look?

Under the hood, Axon 2 features seven FM-based percussion voices that are derived from a single 18‑operator FM engine. Each voice offers independent filters, distortion and white noise, and basic mixing facilities such as volume and pan are included, as is a stereo delay with an X‑Y pad offering real-time control.

Technically, the app is iPad-only, requires iOS 9.3 or later, runs stand-alone, via IAA and — yay! — also offers AU plug-in support. This is a big deal in itself as, so far at least, we have not seen many of the really big hitters in terms of drum apps (acoustic or electronic) make it over to the AU format. It’s good to see Audio Damage leading the charge on this front.

The AI element comes in with the sequencer and uses a modified artificial neural network. This allows the user to generate new rhythmic ideas and Axon 2’s ‘intelligence’ will add some interesting variations. The sequencer contains seven ‘neurons’ that will trigger a sound when they themselves have received a set number of pulses (set via the Threshold knob for each voice). The users can link these various neurons in any combination and the system is intelligent enough to avoid data loops.

The interface looks very slick and, when used stand-alone, aside from a few under-the-hood settings (for example, the MIDI options), the bulk of the controls are housed within a single screen. In terms of sounds, I think programmers will find they very quickly get the hang of things, but even a synth novice ought to find their way around without too much trouble. As an AU plug-in, the controls are split across two pages, but this is nicely done and easy to navigate.

The ‘neural network’ element of the app might take a little longer to fully get to grips with. That said, it is a very interesting concept and will most certainly appeal to those with a more experimental streak. While the two apps are very different, if you like the kinds of things Jonatan Liljedahl’s brilliant Sector app does in terms of creative rhythms, then I suspect you are also going to like Axon 2; it’s creative, inspiring and very competitively priced.