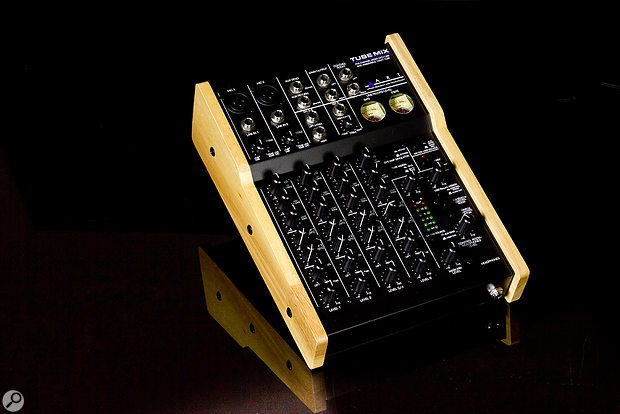 A mixer, a USB 2 interface, and valve coloration all for less than the price of many preamps — is it too good to be true?

The Tube Mix, as the name suggests, includes a valve in the signal path: it’s fitted with a single 12AX7 (ECC83) dual-triode valve that can be switched into the appropriate signal path when you wish. As is made clear in the manual, the valve stages are there to apply a subtle warmth when desired, not to add particularly obvious distortion — and that’s a claim that was borne out in my review tests.

Also included in the design is a class-compliant two-channel 16-bit (up to) 48kHz USB 2 audio recording interface. This needs no drivers for use with Mac OS, Windows or Linux, and draws its power from the computer’s USB bus. (The rest of the electronics is powered via the mixer’s included external PSU.)

The mixer is housed in a tough, folded-steel case sandwiched between two wooden end-cheeks. The controls are clearly marked and, overall, the mixer weighs in at a reassuring 2.5kg. All the controls and connections, other than the rear-panel PSU input, USB connector, power switch and front-edge headphone jack, are located on the top panel.

All channels have a similar control set, other than Channel 3/4, which has no trim control. Channels 1 and 2 are mic/line inputs on separate jacks or XLRs (with a separate input Trim control) while Channel 3/4 is stereo line-only on two jacks. Channel 5 has a high-impedance instrument jack input with a switchable guitar speaker simulator. To save space, the channel level controls are on rotary pots rather than faders but, with so few channels to control, that’s no hardship. LED peak-clip indicators are fitted to all but the stereo channel. 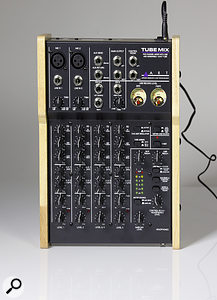 Each channel has a fixed-frequency mid EQ (2.5kHz) plus high and low shelves at 12kHz and 80Hz respectively, all with a versatile ±15dB range. The are two pre-fade aux sends, labelled Left and Right, plus pan pots (I guess the stereo channel pan really should say ‘stereo balance’, but it’s clear what’s meant!). Phantom power can be applied to the first two channels via a button in the master section, and there’s a single pair of aux send/return jack sockets (each is stereo on a TRS jack socket) in addition to the main out and control room out, which are on balanced TRS jacks. A pair of (unilluminated) mini VU meters follow the USB record level and the USB out can be switched to be fed either from the main mix or from the left and right auxes.

A button places the two halves of the valve in channels one and two, or in the stereo channel five. The valve circuitry comes after the input trim stage in the signal path, but before the EQ. I had anticipated an option to use this circuit on the main stereo output too, so you could add some character to the mix, but that doesn’t seem to be catered for — perhaps something for a future model?

The lower right-hand master section has pots for Aux Return, USB Return, Main Mix Level and Control Room/Phones level. A six-section, stereo LED ladder meter follows either the left/right levels or the aux send, and there are further buttons to route the USB return to the Control Room feed or, pre-fader, to the Main Mix. There are also ‘Aux Send to Control Room’ and ‘Main to Control Room’ routing buttons.

The manual warns of the possibility of creating a feedback loop if the USB return signal is routed to the USB output while your DAW is also monitoring the same USB input. Using the Aux Sends to feed the USB output rather than using the main mix output gets around this issue. For live or general-purpose mixing use, the master-section buttons can be left set to their out positions. Though fixed pre-fader, the aux bus may be used to set up a pair of monitor mixes in the usual way, or it could be pressed into service as an effects send. 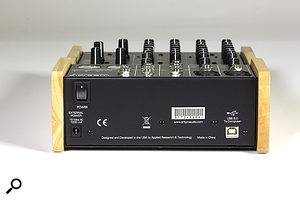 The USB 2 connection caters for 16-bit stereo audio interfacing.By way of technical specification, the mic amps have a respectable EIN of -127dBu C-weighted, and both the Main/Mon and Aux outputs can send levels of up to +20dBu balanced (or +17dBu unbalanced). Up to 73dB of mic gain is available and the overall frequency response (mic input to main output) is an impressive 20Hz to 100kHz within 1dB.

The ART Tube Mix is conventionally straightforward in operation, but differs from most other mixers in its price range in that the contribution of the valve circuity, when engaged, adds a fairly subtle but musically valid thickening to the sound. Having a mid EQ on a small mixer such as this also makes it a little more versatile than many, and it certainly sounds clean and workmanlike with no obvious vices. At no point did I notice any excessive noise or other signal-path problems.

Based on analogue filtering, the speaker emulator is somewhat basic by modern standards, but it does help take the raw edge off a DI’d guitar, especially if you are using any overdrive. If you’re working with a DAW you may have access to something more sophisticated, perhaps based on convolution, but it’s thoughtful of ART to include it nonetheless, and it should widen this mixer’s appeal to many home-studio users.

Using the aux send controls as recording sends works perfectly well, and although you might think the interface’s 16-bit specification appears a little out of place in our 24-bit world, it’s perfectly adequate for recording as long as you make the best use of the available headroom.

Overall, then, the ART Tube Mix is a well-behaved mixer with low noise, a clean sound (though with the option to switch that tube into the path for some subtle colour), plenty of headroom and a perfectly practical stereo USB 2 audio interface. As a desktop DAW interface it has much to commend it, and don’t be put off by the 16-bit converters; there’s still plenty of dynamic range. While you could obviously ask more of a mixer and interface in the studio, there’s plenty on offer here given the modest asking price.

If you don’t need the valves there’s no shortage of small mixers out there, from the likes of Behringer, Mackie, Soundcraft, Yamaha and Allen & Heath, to name but a few. But I haven’t come across anything else at this price that includes anything like this device’s valve stage.

Given its low cost, the ART Tube Mix is impressive, both in terms of its construction and its performance.