Q. When used live, how should I protect an audio interface from phantom power damage? 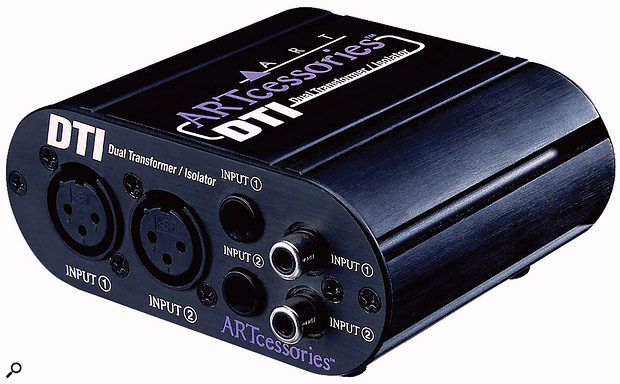 Phantom power shouldn’t be delivered to line outputs but you can never guarantee that a FOH mixer hasn’t been modified. A passive DI box or transformer isolator, such as the ART DTI, can protect audio interfaces from potential catastrophe when used on stage!

Is a DI box the answer, and if so, what type? I would also like a good DI box for my guitars too, so can I kill two birds with one stone? And would the DI box help reject interference? Finally, someone told me that phantom power does not run through jack lead connections. Is this correct and would that negate the need for a DI box?

SOS Technical Editor Hugh Robjohns replies: Very few electronic line-level devices (computer sound cards, electronic keyboards, MP3 players, DJ mixers, etc) like having 48V phantom power applied to their outputs! Some are designed to cope, but many will be damaged or even destroyed, so some form of electrical protection is definitely advisable, if only to protect against accidental mis-plugging on a dark live stage!

The main practical difference between these two devices is that DI boxes are designed to transform the unbalanced line or instrument signal down to a balanced mic-level output signal, while a line isolator doesn’t change the signal level at all and so provides a balanced line-level output from an unbalanced line-level source. The choice of one over the other really depends on what signal level the mixer’s mic inputs can cope with, but in most live-sound cases I would generally go with a DI box.

When working with electronic sources (sound cards, keyboards, etc), a ‘passive’ DI box would be fine (I often use a Radial ProD2, for example), but if you are likely to want to use the DI box with an electric guitar I’d recommend buying an ‘active’ one instead, simply because the input impedance is usually higher and is less likely to affect the guitar tone in a negative way. Two popular ‘industry standards’ are the Radial J48 and the BSS AR-133. Although initially expensive these devices both sound very good indeed, and will easily last a lifetime; most cheap alternatives don’t and won’t!

An alternative source of extremely good and highly cost-effective active DI boxes is Orchid Electronics: (www.soundonsound.com/reviews/orchid-electronics-di-boxes). Technically, these don’t use an isolating transformer (this contributes to the lower cost and smaller size) but they will still keep the phantom power safely away from the source equipment. I have several and use them frequently.

The notion of reducing the signal level through a DI box only to boost it again in the mixer’s mic preamp isn’t ideal, so if the mic preamp has the headroom to cope with a line-level signal (many do), then it might make more sense to use a line isolator box instead, providing a balanced line-level output from a line-level source. My usual recommendation is the ART DTI box, simply because it’s quite affordable and it has a plethora of different connection formats, making it very versatile indeed. Again, there are higher-quality alternatives, including the Radial Twin Iso that uses Jensen transformers, but they cost considerably more and it’s unlikely that the slightly better sound quality will be noticed in most live-sound contexts.

Moving on to your other queries, it’s generally true that phantom power is not present on the line inputs of most mixers, and so shouldn’t appear on jack leads, either. However, I have come across mixers and preamps that do send phantom power over the line input connections — and in any case, you never know if someone may have used an adapter or bodge lead to convert between a phantom-powered mic input and a line socket, so it would be unwise to assume that a jack lead connection doesn’t have phantom power on it, especially when working with unknown equipment and sound engineers in the dark confusion of a live sound stage! My advice is to always protect your valuable equipment with a DI box or line isolator!

Finally, there can be a beneficial reduction in interference when using DI or line isolation boxes, but only because placing the box next to the unbalanced sound source means the long cable run back to the mixer will be balanced and thus able to reject interference far better in comparison with running long unbalanced cables directly between the source and mixer.