Drum machines are not a drummer’s enemy.

When I formed my very first band, a friend told me: “The drummer is always the first to be replaced, and eventually it’ll be by a drum machine.” 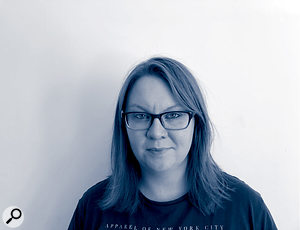 That was way back in my early teens, and it stuck with me for a while. I developed the idea that live drums are the only way to make music sound good, and ‘fake drums’ were for losers.

While the case may not be true for every drummer, it feels like there is an unspoken stance amongst many drummers that drum machines, and the creation of digital drum tracks, are not only taking away work from drummers, but not actually doing a great‑sounding job in the process.

As my musical tastes expanded and my thirst for knowledge about sound creation increased, I became more and more interested in creating digital music and beats. Over the years I’ve started to work digital drum sounds into my own projects, but more importantly, worked them into my practice routine to actually become a better live drummer.

When you’re starting out playing a big, acoustic instrument such as a drum kit, and it’s your first serious foray into the world of music, you can’t help but soak up all the knowledge that’s presented to you. In the case of visiting drum stores, watching drumming DVDs and trying to learn from ‘the greats’, it can be all too easy to get carried away with this idea that nothing can match a live drum set.

It’s true that nothing quite compares to the physical feeling of playing harder, the power of being able to stop time just by missing a down beat, or the ability to switch the mood of a track by simply moving one hand to a different part of the kit. But, as I’ve discovered, experimenting with both digital drumming hardware and software can help open up your mind even further from just the components of the kit in front of you.

Crucially, drummers need to get over this fear of technology, and get rid of the old world view that everything still sounds like the drum samples on a cheap ‘80s keyboard.

For me, it all started because my band needed an easy way for our frontman to complete songs. We would get together and jam, record a rough take on our phones, and I would go home, boot up Reason and attempt to mark out my drum track. Then he could add in guitar and bass and listen to that version while he worked out lyrics and melodies.

I admit that it’s probably not the most efficient way to write songs, but having band practices in what was actually a discarded lorry body, and very little money for decent recording equipment, it was a thing we tried and then ran with for a long time.

During this time of digitising my drum tracks, I started to realise that as I recreated them, I was able to hear my beats and fills in a more critical way, and actually make adjustments and try out alternative patterns. Essentially, I was improving my initial ideas. In the heat of a jamming session, it’s easy to find comfort in the repetition of a beat, but listening back with fresh ears, I could see parts that needed a little flourish to keep the songs moving.

As well as improving our ideas in their digital existence, it also meant that I had to work at recreating my new ideas on a live kit. As a drummer, you can’t help but lock into your muscle memory. If you want to do a fill around the kit, you’re naturally going to start left to right, high to low, and with your right hand leading.

While that will always be instinct for me, one of my favourite exercises is to jump on some software — it could be GarageBand, a dedicated drum machine or just a free app on my phone — and mess around with a beat while trying not to think about how it could be played live. I’ll then get on the kit, and figure out how to make it work. It could be tricky, it could be completely impossible, but it keeps the creativity alive!

Laura Barnes is the founder of UK musical instrument trade web site MI Focus. She has over 15 years experience as a drummer, and a slight obsession with collecting unusual instruments, the latest being an emu caller and a harmonica built into a Nintendo game cartridge. She also has very understanding neighbours.