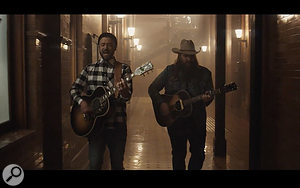 As his fans become savvier about backroom production tricks, how can Justin Timberlake convince them he’s not just a fashionable mediocrity with a big budget for studio fakery? I know: join forces with more-credible-than-thou roots artist Chris Stapleton, hire warts-and-all music documentary purveyors La Blogothéque, and do an ambitiously choreographed ‘live in a single take’ music video! Well, you’ll forgive me if I forego the widespread ‘OMG how amazing they did it all live’ reaction, because a fundamental attribute of live performance is that there’s no safety net, and nowhere to hide if you goof or your tuning/timing is wayward. Judging by the setup described in SOS April 2018’s ‘Inside Track’ feature, I don’t think there was actually any such jeopardy at all. Let me explain...

The bass, Rhodes piano, and both ‘lead’ acoustic guitars were DI’d. Elliot Ives’s guitar is seen being recorded in a separate room (with a door), and none of the mics inside the upright piano (with the lid closed), in the bells of the horns (as shown in the article), and right by the kick and snare would have picked up much spill either. The article’s Pro Tools screenshots reveal that the drum overhead channel is mostly muted, apart from infrequent cymbal hits. All the lead and backing vocals were close-miked with lavaliers, and the lack of mechanical noise from the vintage elevator during Timberlake’s first verse suggests those were pretty effective at keeping spill levels low — so I doubt either lead singer picked up much spill from anything other than the drums and their own guitars. As for the ambient and choir mics, heaven knows how much of those we’re actually hearing, given all the reverbs on display in the Pro Tools mix project and the engineers’ own admission that they did choir-only overdubs that were “really helpful later during mixing”.

In short, I reckon you could have grid-edited the band and Melodyned the living daylights out of all the vocals without tremendous difficulty. Even the spill on the vocals wouldn’t have been very problematic, because the unpitched and diffuse nature of drum ambience wouldn’t be very revealing of pitch/timing-shift artifacts, while the song’s multi-layered acoustic-guitar texture would disguise any phasey-sounding guitar spill. While it’s not impossible that this soundtrack is a truly unvarnished live performance, personally I think it’s pretty long odds, given the more wayward tuning of Timberlake’s live performance on The Tonight Show, for instance. And once that seed of suspicion is sown, who’s to say that the engineers didn’t comp parts between their six takes? Or even just re-record everything (except the choir overdubs) in the studio and sync things back up with ADR software? Sure, no-one mentioned anything of the sort, but long-time readers who recall our coverage of Cher’s ‘Believe’ back in SOS February 1999 will know that producers aren’t always entirely frank about corrective editing as regards their highest-profile clients.

So if you strip out the credibility of the video’s central audio conceit, you’re basically left with two middle-aged guitar-strummers strolling around and riding lifts. Big hairy deal! Hell, in purely visual terms, I’m more impressed by the Spice Girls’ one-take wonder for ‘Wannabe’... Mike Senior 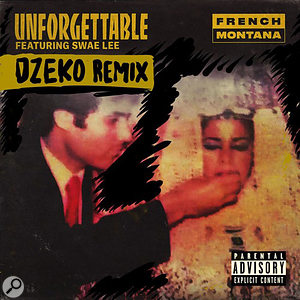 House artists have been pulsing the envelopes of sustained synth sounds, sampled ambiences, and effects returns in a quarter-note pattern for such a long time now, but it surprises me how seldom I hear the related trick that appears at the outset of this production (and frequently after that too): the whole-note envelope ramp. It’s particularly effective, in fact, when it’s set alongside the traditional quarter-note variety from 0:49, because together they create a sense of internal rhythmic momentum both per bar and per beat. What is a little unusual, though, is that the whole-note envelope (which sounds like a filter envelope) resets a fraction before the downbeat of each bar, and I wonder whether the little anticipatory filter-sweep ‘blip’ slightly undermines the groove, most noticeably during the stripped-back sections at 0:11 and 1:48. Mike Senior 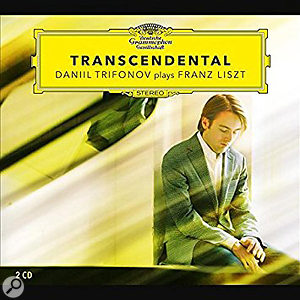 Daniil Trifonov’s tremendous recording of Liszt’s complete concert études was a worthy winner of this year’s Best Classical Instrumental Solo Grammy. (I was, rather unwisely in retrospect, drinking a glass of milk while listening to his astonishing rendition of ‘Gnomenriegen’; there’s a QWERTY-keyboard cleaning job I never want to have to do again...) One of the crucial issues for any classical recording is the balance between the direct and reverberant sound, something that’s enormously ticklish to manage with just one pair of mics, so most recordists therefore opt to use multiple mic pairs at different distances to afford some mixdown control over the depth perspective. This isn’t just an arse-saving measure, though, because it allows you to adapt the degree of close detail and reverberant expansiveness to suit changes in the music, which is something I think really pays dividends in this production.

As it happens, the CD’s booklet and trailer video both clearly show the multi-mic system they used, comprising three small-diaphragm pairs that I’d eyeball as being roughly 2m, 5m, and 10m from the hammers respectively. (There’s also a large-diaphragm mic hovering around the tail of the instrument, presumably for an alternative tonal perspective.) If you use your DAW to skip around the timeline of, say, the final A-minor étude, I think you can hear the mix engineer rebalancing those mics in response to the contrasting demands of the Theme and its 11 Variations. To my ears, Variations 1 and 4 feel appreciably more present and detailed, for instance, with less room ambience, better to allow their delicate rhythmic intricacies to shine through, whereas the sound becomes more open and resonant for the grandiose chordal sweeps of the closing Variation 11. The transition between Variations 4 and 5 is also interesting, given that they’re both at a similar dynamic level, because it feels to me as if Trifonov can’t be solely responsible for the softer tone and additional sustain of the latter.

Where the recording method pays off most handsomely for me, though, is during Variation 6, where the music’s sheer machine-gun speed and chordal density usually renders it a bit of a mush in most real-world concert situations, to be honest, no matter how clear the player’s articulation. Here, the ambience manages to maintain impressive warmth and width, but with every staccato clear as a bell and the sporadic action of the sustain pedal thrown into dramatic relief.

Another intriguing aspect of the recording setup is that the left and right ‘close mics’ are each actually two separate mics taped together in a vertically aligned bundle. None of the pictures show enough detail to identify the mics exactly, but they do look like they’re from the same manufacturer, so I wonder whether they’re some implementation of the Straus Paket (named after recording engineer Volker Straus), whereby you mix the signals of coincident cardioid and omni capsules to generate a variable sub-cardioid response. Again, this would potentially provide further post-production control over the depth perspective, so I could see the appeal. Mike Senior 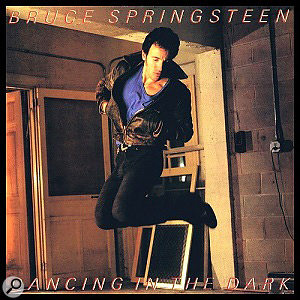 This song has so comprehensively wormed its way into the collective unconscious that it’s hard to hear it without preconceptions, but at face value that drum sound is pretty strange. For a start, the combination of super-dry kick, densely ambient snare, and diffusely distant hi-hat bear no relation to any kind of acoustic reality. In addition, the hyper-consistent kick and snare hits add a definite drum-machine character to the part. I suspect they’re both triggered samples, in fact, given the ‘AMS Kick’ and ‘AMS Sn’ track-sheet annotations for the same album’s ‘Born In The USA’, as shown in SOS March 2010's Classic Tracks feature. (The AMS DMX 15-80s was one of the first devices widely used for drum-sample triggering.) The scarcity of cymbal hits is also strange for what is ostensibly a rock song, and the two we do get (at 1:50 and 2:42) are much louder and more forward-sounding than the hi-hat.

Looking at the studio setup from that Classic Tracks article, I find it fascinating how the received wisdom of the time was to isolate all the musicians from each other acoustically, thereby removing any shared ambience, only to add masses of artificial reverb at mixdown to regenerate an acoustic connection! Of course, this rather roundabout process did produce sounds that were new and ear-catching at the time — and there’s no arguing with that — but now that the bouffant quiffs of the ’80s are long deflated, it does seem rather too much like hard work to me.

The small-speaker translation is worthy of admiration, though; there’s no denying the clarity with which the song’s main musical elements would have driven through a mono AM radio. The kick’s kept present in the mix by its perky upper mid-range, for example, and the bass guitar line can be easily traced via the fizzy synth that’s surreptitiously doubling it. The snare is, of course, as solid as you’d expect of a sample, while The Boss himself has clearly been expertly automated to keep softer low-register phrases such as “hey there baby” (0:33) pinned into the same mix position as the upper-register bawling on “I’m just about starving tonight” (2:14).

On a musical level, despite the song’s apparent simplicity, it pulls a neat little harmonic trick. The melodic backbone of the song, as featured in the opening synth riff and much of the vocal line, appears over three different harmonic backings. First you get it over a B pedal note, with alternating Bm and G#m chords, then the bass picks out the root notes of those chords for the second half of the prechorus (0:33-0:38), and for the title hook (0:45-0:51) we get E and C#m chords instead.

In common with most ’80s productions, the original music video is good for a giggle, featuring as it does a pre-Friends Courteney Cox. I was also surprised to learn that the director was Brian De Palma, better known for rather less wholesome fare such as Carrie and Scarface. Perhaps Springsteen’s horrifying dancing drew him to the project... Mike Senior