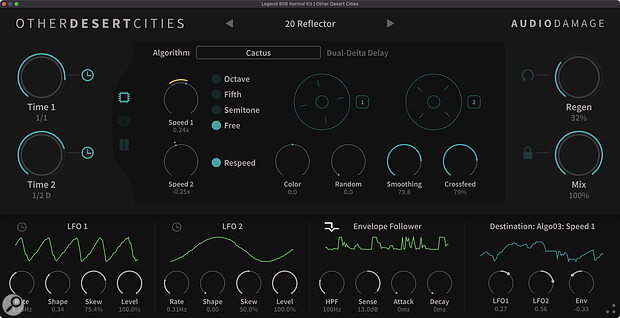 I’ve been a fan of Audio Damage’s effects plug‑ins for many years; they’re generally quirky and expressive. Other Desert Cities, their latest offering, is a curiously named take on delay processing, with both new and some decidedly retro aspects. Compared with some vendors who seem to take pride in photo‑realistic interfaces, Audio Damage’s visual clarity is refreshing and free of distraction: the interface is minimal, with subdued colours, pencil‑line waveforms and simple arcs for the control knobs, although there are some simple animated graphics depicting the audio processing.

Riffing off the Other Desert Cities name (which I’ll abbreviate to ODC from here), the six distinct delay algorithms are named after cities in Arizona: Desert Shores (stereo delay), Mecca (reverse delay), Cactus (dual ‘tape loop’), Thermal (multitap delay), Mirage (multi‑head ‘drum’ delay) and Sky Valley (granular processing). Regardless of the choice of algorithm, there’s a global diffusion processor, and controls for regeneration, panning and output level. All algorithms are built around a left‑right pair of audio buffers.

Examining the algorithms in turn, Desert Shores is the closest we get to a conventional delay, with left and right delay times (milliseconds or tempo‑based), high‑ and low‑pass filters, left/right time spread, crossfeed and saturation. With a bit of tweaking of filters and saturation it’s pretty easy to get passable dub delays or edgy flangers. Delay times can be swept smoothly; crank them right down, ramp up the regeneration and the delays will even behave like audio oscillators.

The Mecca delay algorithm repeatedly buffers the delayed component of the signal and plays it backwards, rather in the manner of a live looper.

Thermal is a stereo multitap delay with up to 16 variable‑level taps. You choose the number of taps and they’re scaled into the delay period, allowing for interesting polyrhythms.

The remaining algorithms take us well out of the realm of the conventional. Cactus runs a pair of tape loop‑like delays, enabling modulatable variable‑speed, bidirectional playback. You can randomly sample regions of the delay buffers. At this point we’re starting to leave the safe territory of predictable echoes and tunings, but Cactus does at least allow the playback rates to be quantised to semitones, fifths or octaves. (The controls are still continuous for automation, but the speed difference is snapped to the nearest quantised interval.) A Respeed switch determines whether the ‘regenerated’ audio routed back into the effect for feedback is tapped from the buffered source signal or the pitch‑shifted output.

Mirage is similarly mechanical in concept and has the same basic controls as Cactus. A ‘drum’ of playback heads sweeps the incoming signal viewed as a moving tape; the number of heads can be altered, as can their response ‘window’. I found Mirage to be a smoother, more organic and adaptable process than Cactus. The multiple play heads can mimic a multitap delay after a fashion, but with Respeed turned on, it’s possible to get lovely Eventide‑like pitch glissandos.

Finally, Sky Valley is the obligatory granular delay. I’m not a massive granular fan in general, but a long grain size and octave‑quantised pitches allow for some rather beautiful harmonic landscapes to emerge out of simple monophonic input tones.

Other Desert Cities takes on the audio delay world with gusto and imagination... I thoroughly recommend it as part of your sound design toolbox.

My rather gritty granular experiments led me to explore the global diffusion processor — great for smoothing the effected signal through what sounds like a soft, gated reverb. An internal LFO modulates the diffusion filters to create facets of chorusing or tremolo. If the main delay effect is clean diffusion may not be needed, but it’s great for adding thickness and blurring artefacts. ODC has fully modulatable pan controls for the delays and regeneration signal.

Practically everything in ODC can be automated smoothly (even things like the number of playheads, which is a bit mind‑bending), and it comes with a small but neatly designed modulation system, sporting two LFOs as well as an envelope follower that can accept a side‑chain input. Click any control in the device and then apply modulation to taste; yellow arcs dynamically show the amount of modulation in real time. Like other recent Audio Damage products, the LFO waveform is continuously variable by shape and skew (there’s no waveform selector) and, of course, the LFOs can be tempo‑locked for rhythmic effect. The envelope follower has attack and decay controls to smooth its output. Apply envelope following to the ‘drum’ playback speed in the Mirage algorithm, and you’re firmly in classic finger‑on‑capstan tape‑effect territory.

A small selection of factory presets and a set of curated ‘designer’ presets cover all bases from dub and reverse delays through to processes that sound like they involve multiple pitch‑shifters and yards of open‑reel tape. As such, Other Desert Cities takes on the audio delay world with gusto and imagination, and manages to balance sophisticated and other‑worldly effects with a clean and easy‑to‑use interface. I thoroughly recommend it as part of your sound design toolbox.